Jo of Jo's Country Junction blog is hosting a Crumb Along that started in September and is running for thirteen weeks.  She finished a crumb quilt for her daughter back in July and a lot of people expressed interest in the process.  "Crumb blocks" are another scrap quilt concept promoted by Bonnie Hunter of Quiltville.  This quilt along is right up my alley for two reasons:  First of all, after all the sewing this spring and summer, I had this on my sewing table: 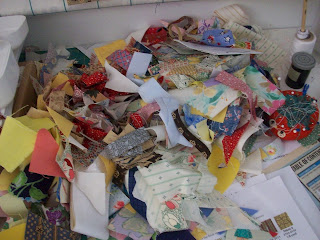 I knew that these would wind up as crumbs and as luck would have it an idea for a project had come along right as the pile was growing.  So I've turned mine into these: 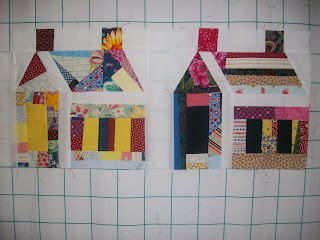 *** Warning Long Post About Process Ahead ***
I had a couple of inspirations for this.  The first was from Victoria of the Bumble Beans Inc. blog.  She had a quilt exhibit from the end of April to the end of May which I managed to catch on the last day.  One of the quilts she displayed there was her famous "Kitchen Sink" quilt.  I love that quilt and seeing it up close and personal, I loved the house block made with "crumb fabric" (see it in the top center) and knew I wanted to do that one day.

I was further inspired by "The House That Kaffe Built" pattern by Kathryn Patterson that appeared in the May/June 2011 issue of McCall's Quilting.  The way the Kaffe Fassette fabrics displayed in the blocks reminded me of Victoria's block and I decided right then that I'd make the McCall's quilt but with "Crumb Fabric" (my Kaffe stash is already slated for other projects)!

After Jo announced intentions for the "Crumb Along", I started doing leader/ender pieces of crumbs while working on other projects with the plan to make a big piece of crumb "fabric" first and then cut the house parts from that.  But I found that to be too slow/unfocused for me.  Then recently, I was led from another blog to a blog post by Julia of the "Julia's Place" where she talked about piecing the Kaffe House block by paper piecing it and offered to send a paper-pieced pattern for the block to anyone requesting it in the comments.

While waiting to get her pattern, I thought about how I was going to do the piecing and thought I would need to take parts of the pattern apart in order to piece the crumbs to the foundation.  However, the same day there was a post on the "Sew We Quilt" blog (hosted by the famous Madame Samm) by guest host Elaine about paper piecing with freezer paper.  LIGHTBULB MOMENT!!  If I used Elaine's PP method, I could piece each crumb section until it was large enough to fit the part of the foundation I needed to cover, attach them to the solid pieces of the house AND I wouldn't even need to print more than one foundation block since with her method you don't sew ON the pattern (as you do in traditional paper piecing) but next to it.

But then a new issue arose:  I read Julia's post and it said her pattern made a 5-1/2" x 6" block and I wanted bigger blocks.  The first thought was to enlarge her pattern on the printer.  However, when I went to search for the link to her blog, lo and behold I found another foundation pattern offered by Quilters Newsletter Magazine that made a larger 10-1/2" (school) house block which is even bigger than the 8-1/2" finished size of the original McCall's pattern.

The first block took me much longer to do than I expected because contrary to what I remembered reading in Elaine's instructions, I found I had to pull back the freezer paper to sew on each adjoining piece (Warning:  Du'oh! moment ahead).  Re-reading the instructions, I realized that I had been doing it wrong:

I was putting the “right side” of my “fabric” against the sticky side of the freezer paper which I had been doing in order for the finished block to face in the right direction per the foundation pattern.

After re-reading Elaine’s instructions and (only then) remembering how I have done paper piecing in the past, I realized that I should have been putting the “wrong side” of my “fabric” to the sticky side.  However, when I went to do a second block, I realized a new problem -- doing so would mean that my house would face in the opposite direction (door on the right instead of the left) than in the pattern block.  Looking again at the QNM foundations I realized that the foundations for the chimney, front door and side house sections are symmetrical and so can be pieced correctly as is but it must be kept in mind that the pieces in the finished block, when oriented in the direction I wanted, will be in the flipped position from where they were pieced: (i.e. for the house front section, the #2 piece will be on “top” of the door not on the “bottom” as pieced; in the house side section, the #5 piece will be to the left of the house not to the right as pieced).  This is not a problem if you are making the blocks from one fabric like was done for the original quilt this was made for, but may be an issue if you are “creatively coloring” your house like I am.
What was still a problem was the roof section.  Pieced as printed, it would have still been backwards from the rest of the units.  The solution:  I was able to scan a printed copy of the roof foundation page into my printer and using the scanner software, “horizontally flip” the page and send it to my printer to print “backwards”.  Now when I put the pattern together and piece that section of the house it all goes well and as fast as expected. 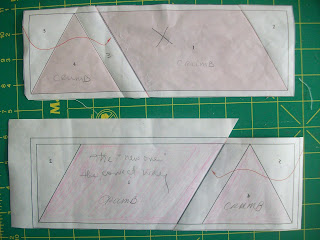 My second reason for wanting to do this quilt along is that I am not new to crumb quilting.  At the end of last year, I had finished the top of my first crumb project called "Paisley Park is Full of Crumbs" (which you can read about here).  I had started the quilting of it for a 2010 Year End UFO challenge but didn't get it finished in time.  It was also on my PHD Challenge list at the start of 2011 but between moving and the new projects I started, continuing that work got pushed to the side.  So in the interest of getting another Crumb finish as well as a PHD finish completed, I will also be working on finishing the quilting of this project too.
Posted by Vivian at 7:48 PM

Glad you were inspired! I had made that one house block, loved it, bu tit was so putz-y I abandoned that HOUSE! ;-) Yours will be lovely! thanks for acknowledging my block and my quilts!

Crumbs give an artist, like you, a chance to enjoy the challenge and reap the benefits. What fun you must have had! Great houses.