To Quilt Is Human, To Finish Divine!

I finally have some finishes for 2009 and for the "Spring To Finish Challenge" being hosted by Jacqui at the Tallgrass Prairie Studio blog .
The basket quilt is done. The pattern is the "Postage Stamp Quilt" from Alex Anderson's very first book "Quilts For Fabric Lovers" (C&T Publishing, 1994, out of print). My quilt was made a little smaller than the one in the book. The picture of the back was taken before I wrote in the quilt label information. 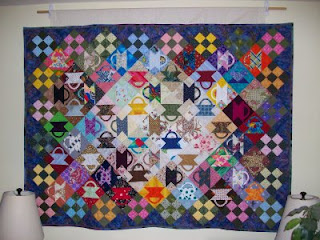 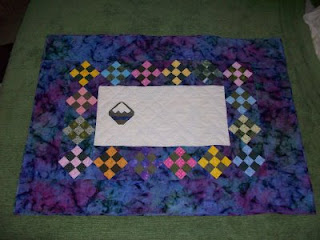 This was one of my "scrap quilt challenge" projects. I have a self-imposed challenge to make (or at least start) a quilt from scraps each year. All the basket blocks were cut from leftover pieces cut from other projects with a few backgrounds cut from stash if no coordinating scraps were available. The border and backing fabrics were purchased new as were the blue, yellow, pink and two of the olive prints used in the nine-patch blocks (the rest of the olive prints came from stash).

In a previous post about this quilt Sue posted a comment that she didn't think she'd ever get to do one. I've got to say that in the book Alex said making these blocks is addictive and I agree with her! They are quite simple and small (4-1/2" finished) and pieced except for the handle which is stitched onto the background and then finished by applique (I did the applique by machine). Alex also demonstrated this block on the "Simply Quilts" show episode #216 "Designing Fabric with Nancy Martin" for those of you who (like me) may still have the shows on tape (and which reminds me I've got to check on DVD recorder prices again so I can finally get all those tapes transferred to disk!).
While I love the way the quilt turned out, it's definitely not square since the bottom edge is rippling something awful. However, I think it's striking enough to display for a while. I also love the binding technique I used. It is a "piped binding" -- no actual piping cord is used just two fabrics layered and best of all applied completely by machine. The technique is from the book "Triangulations Bed Quilts" by Brenda Henning and is one I will definitely use again.

The second finish is a quilt made for my cousin's soon to be three year old daughter. It is made from the "Five and Dime" quilt pattern by All Washed Up. 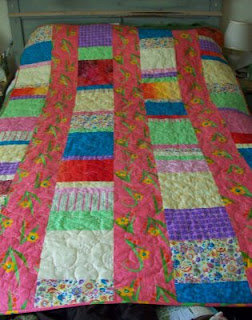 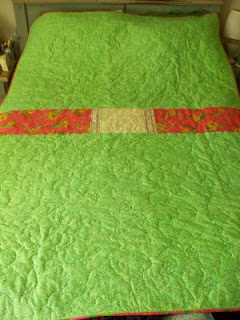 I call it the "Girly Pink Spring Quilt". The quilt got its name because it started with some bright fabrics purchased in a Fons & Porter scrap bag that I thought were real "girly", something my cousin said her daughter was quickly becoming. I added some coordinating fabrics from my stash and then found the pink fabric used for the vertical sashing on the front and the green backing fabric at Aunt Bee's Sewing Basket at a clearance sale at the beginning of the year. When I started working on the quilt, my husband asked me if I was making a "spring quilt" and I added that to the name. I hope to give it to her this month for her birthday although now this means I must also layer and finish the quilt I've got for her brother too!

In other quilty news: I was accepted to participate in my first block swap. Margaret of the Quick Queen of Quincy blog is hosting a summer "Color Block" block swap. She opened the block swap up to fifty participants and I was able to snag the last spot. So I'll be working on those blocks over the next two months since we are to submit sets of blocks by the beginning of July and mid August.
Unfortunately having just finished these two pieces I don't have anything up on the design wall right now. I'm taking a break for a day and then as of June 1 will be plunging back into my Joann BOM project and the aforementioned brother gift quilt. So I should be back in June with some good quilty stuff to post!

No Spring Finish For Me

Unfortunately, I was not able to complete anything for Jacquie's April Spring Finish Challenge. I have so many projects in progress and had a hard time trying to focus on just one. But no finishes does not mean that nothing was accomplished. I was able to bring quite a few projects forward to their next phase. And as Jacquie noted, the work started in April can continue into May to accumulate more (or for me the first) finishes.
For the basket quilt talked about two posts ago I did get the batik fabric for the back (although it took two tries to get just the right one) and now the back is finished. I'm hoping to make a run to Michael's for some batting (I've got a coupon) so I can get this one layered, basted and (hopefully) quilted. I'm so glad the new fabric goes well with the original setting triangle fabric since I will be using it to bind the quilt too so needed them to be similar. 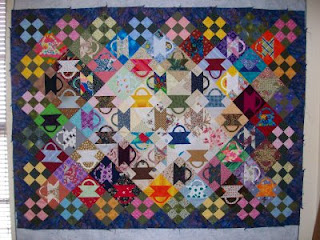 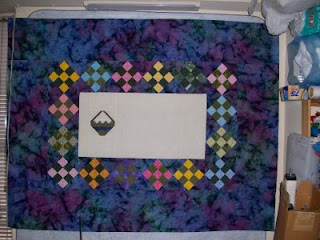 Some other accomplishments: I layered and basted the Stashbuster quilt and was able to get fabric for the binding so now I just need to decide how to quilt it. When I ordered the (second) batik, I was also able to get backing fabric for my Crumb quilt. I had decided that it would be easier to add the bead border after quilting the center so now that I have backing, I can layer and baste that one and also move it along to the quilting phase. And I've prepared the flannel back for the Dino Sports quilt so now the label needs to be attached and it too can be layered and basted for quilting.

After the challenge ended and May began, I was also anxious to work on the next blocks in the "Vintage Treasurers" BOM I've been working on since the start of the year. With the blocks this month I was able to start constructing the center of the top. I have another BOM I want to do in the second half of the year, so I've been doing this one two blocks a month in the hopes of completing the top in June.

On The Design Wall: 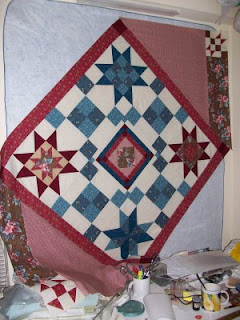 This BOM was issued by the Joann Craft Store chain although I bought the kits on Ebay. I was only able to get five of the monthly kits, the Setting Kit and an accessory booklet. I went to one of the stores and was able to get more of most of the fabrics used and subsititutes for all but two. With that I have drafted the remaining blocks (in Quilt-Pro). The hardest fabric to replace was the light blue fabric in the picture. After many tries elesewhere, I eventually found what I needed at Connecting Threads in their "Country Essentials-Fall" line (which I see is now down to only a few fabrics on closeout).

"Vintage Treasurers" is is my second BOM and neither of them were made one block, a month at a time! The first one was Debbie Mumm's "Christmas Wish" (2008 BOM Sampler) which was made at a rate of two blocks a week between October and December of last year. 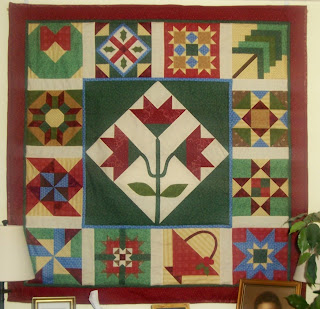 Although I consider this a 2008 finish, it is also on the goal list for this year because I only had time to outline quilt it just enough to be able to hang it up for the holidays. This year, I want to add more detail quilting. I found a cute "Holly and Berries" motif in the Alex Anderson's "Beautifully Quilted" book that I hope to add to it along with the words "A Christmas Wish for A Happy Holiday".

So now to spring ahead so I can have some finishes before it's officially summer!