Joining in again for another edition of "Moving It Forward Monday" over at Em's Scrapbag: 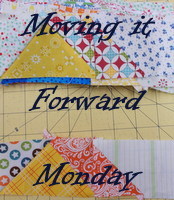 In my last post, I thought I was done with the updates on my En Provence project since I had finished the top.  However, I had plans for one more touch to add to it and wound up getting it done a lot faster than I thought I would.

One of the quirks of this particular project is that when I started pulling fabrics for it, I found that I had at least one polka dot fabric for each of the colors called for in the quilt.  When I went shopping for additional project fabrics, I found even more so using polka dots became a sub-theme of the project.  Ironically when it came time to choose the magenta "focus fabric" I once again found a polka dot fabric for that too!  So needless to say polka dots abound in this top! 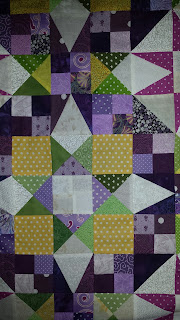 As I got to the part of the mystery where we had to piece the neutral borders for the top, I thought it might be cute to add "polka dots" to it as well.  My original plan was to do that by swapping in a dark square in some of the four patches that make up the last border but that didn't balance out visually.  So instead I decided to applique circles on the border as my "polka dots" instead.

As I found out in a previous project, an Accuquilt  GO! cutter makes short work of prepping circles for applique since you can cut both the fabric: 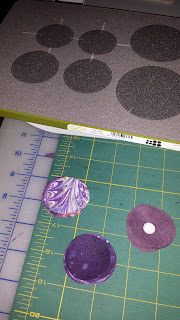 ...and either fusible or (since I planned to do this by hand) templates (out of doubled freezer paper) for turning the circles.  Just cut a smaller circle for the templates than you do for the fabric. 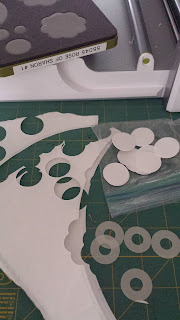 As seen in the picture, I also used the templates from the set of  Karen Buckley Perfect Circles I have to turn the circles.  Since there were only five templates of the size I needed in her set, I die cut the extra freezer paper templates so I could prep more circles at a time.

So now the neutral border has polka dots too! 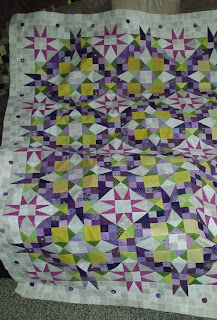 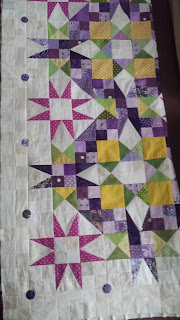 Also this week, I finally finished up the last of the blocks needed for the "On Ringo Lake" mystery -- Woo hoo! 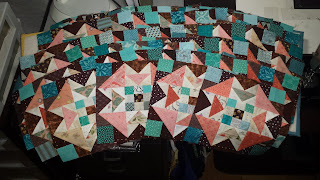 Next step for this one will be to put these blocks up on the design wall with the units we had to piece for sashing and play around with the layout.  If you check out some of the linkups for this mystery, you will see that people have employed some creative placements of the sashing units --- and not always as sashing!

However before I get to that, I'll be focusing this week on setting up my wholecloth project.  I've finally decided on the additional stitch elements I want to add and have made templates (in freezer paper again) for those so have to trace them out onto the top. 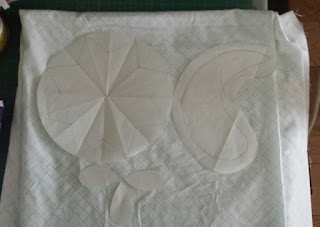 Since the whole cloth is one of the big "Bucket List" projects for this year and I'm way behind on getting start on it, I'll be taking this week to focus on that.

There's so much more to see over at Em's Scrapbag so why not go and check out what everyone has been up to?
Posted by Vivian at 11:36 AM 2 comments:

En Provence and Ringo Lake Update: One Down, One To Go!

This will be the last time "En Provence" will be part of the Moving It Forward Monday link up for a while because.... 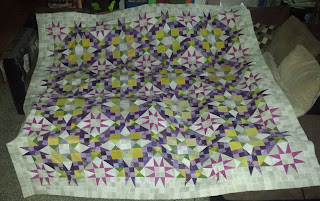 ....it's a top!  Finally got it done on Friday and it's a big'un!!  Right now it's topping out at 123" square so even with shrinkage when I quilt it, this one will be generous on my queen-size bed.  Well, it's done in terms of the mystery --- I still plan to "add a little something" to that second neutral border.  I've also got ideas (and leftover fabric) to start on the backing but that too will probably wait. 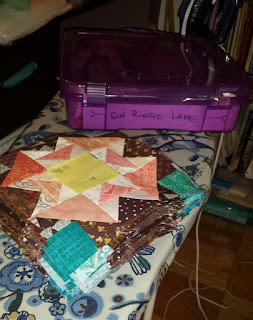 I also added to the "Ringo Lake" block stack during the week but didn't sew anything this weekend so have some catching up to do.

I was also supposed to make decisions on the wholecloth this weekend but I think I was in "flimsy focus withdrawal" so took the weekend off from doing anything quilting related.  I've got a few shows on the DVR to watch so once I post this, I'll be heading back to the machine!

You can find out what other projects where nudged a little further along last week over at Em's Scrapbag blog for Moving It Forward Monday!
Posted by Vivian at 8:17 PM 1 comment:

Once again, I am joining the crew over at Em's Moving It Forward Monday!

As before, it's been "all Bonnie Hunter, all the time" around here in terms of the projects I've been working on.  While the stitching lately hasn't been as consistent as in previous weeks, what was accomplished on the days I did sew helped me hit two milestones.  For the "En Provence" mystery, I've got the center of the top all sewn together: 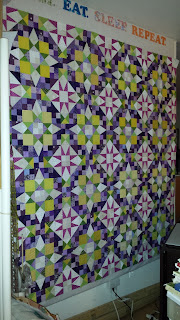 Now there's only a few rows of border units to be sewn and this top will be finished!
For "Ringo Lake", I've got half of the total number of blocks needed sewn up: 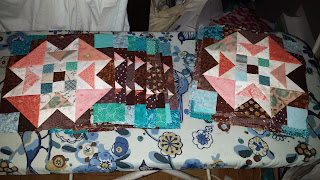 It's gratifying to see the block stack growing, this one could also be a top by the start of Spring.
At one point I needed something else to leader/ender to push those other two through so I pulled out some strips and was able to finish another Scrappy Trips block! 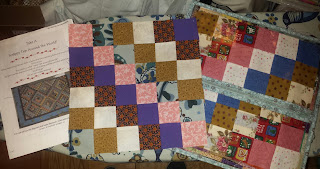 These have been fun to make and I look forward to the day when this one can become the main project.
I had planned to only sew a few of the mystery blocks a day but once the "En Provence" rows started coming together, I was anxious to see the center get done so pushed forward to getting a whole row done on those days when I did get to sew.  I have an idea for slightly altering the borders for it so finishing the borders may move a little slower than the rows did.  So once again, I'm hoping to try to finally start on my big 2018 goals.
Up to now I've been stalled on moving forward with my wholecloth project but have found a resource that seems to have the inspiration I was looking for to help me take it in the direction I want to go.  With any luck, that project will be the subject of next week's "Move It Forward" post.  Fingers crossed! 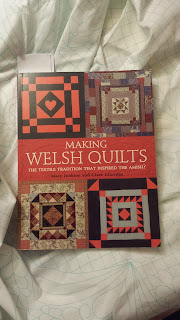 Now, I'm going to go check out what other people have been working on all week.  Join me over at Em's Scrapbag and see who's sharing something on today's "Moving It Forward Monday"!
Posted by Vivian at 7:39 PM 1 comment: