Just wanted to get a quick post in before the month ends.  Already this year has not gone quite as expected.  When 2010 ended I was all set to focus on UFOs and signed up for Myra's PHD Challenge.  My biggest quilty goal for this year was to work on all my accumulated UFOs and complete them.  If I did decide to start any new projects, they too would have to be completed before year-end.  As I noted in my PHD goals post, the reason for this was that I expected we might have the opportunity to move sometime later this year and having read about the issues (aka weight) involved when other bloggers had to move fabric/project stashes, I realized that the less I needed to move the better.

Well, later this year has turned into the start of this year! We live in a co-op and have had an application in for three years for a transfer to a townhouse unit.  We found out last Fall that we had moved pretty high up on the list so assumed that it was just a matter of time before we'd be called about an available unit.  Instead of that happening by this summer or fall as we estimated, the call came the first week of January!!  We have since viewed the unit, submitted the financial paperwork for the transfer approval and have had our current unit inspected.  We were told we'd have the pre-closing information two weeks ago but January is rapidly ending and we are still waiting to get those numbers and schedule the closing and moving date.

The old saying that "a watched pot never boils" applies here.  I have been on pins and needles waiting for the final arrangements to come through while simultaneously focusing (o.k., obsessing) over ideas for decorating (and watching A LOT of HGTV), shopping around for all the new furniture and appliances that we'll need to purchase for the move and gathering boxes for packing.  I have sewn a little here and there but the further along in the process we go, the more my mind is elsewhere.


One of my PHD projects was to complete the Blue & White "Many Paths" project I started a few years ago (pattern by Elisa Wilson of Backporch Designs).  Tea of the TeaQuilts blog has been working on it as a block-of-the-week since November of last year and my plan was to play catch up.  As you can see here, I've put together the parts for seven blocks: 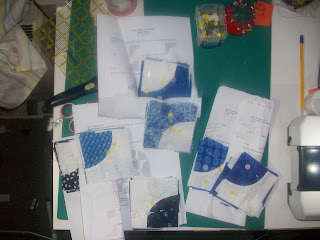 And have assembled two more: 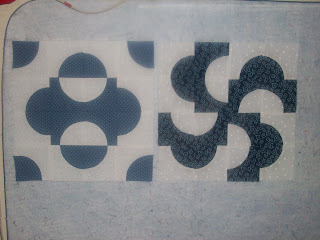 Right now I am one behind since I haven't yet made the block she posted for this past week and will be two behind when she posts the block for this week.  With no guarantee when the closing info will come in, I realize I need to stop watching the pot and get back to my regularly scheduled programming.  In addition, this past week I got an email that the cataloguing software came in at DS2's middle school library so I will be returning to daily volunteering this week as well.
So forgive me for being out of contact and know that it might be awhile before I check in again.  Hopefully by then I'll either be reporting from the moving truck or in my new home!
Posted by Vivian at 7:26 PM 4 comments: