I've been a long time away from the blog and am a day late to this party!  Both April and May were very busy months for both sad and good reasons (more on that in another post).  Despite my tardiness in getting to this task, June is already expected to be better (more on that in another post too) so I'm trying to re-focus myself so I can get back to what I enjoy -- the quilting.


As I expected, the ambitious April GID list proved to not be doable although with all that went on, it was more due to the circumstances at hand and not my own productivity challenges!   I did get to one project:  #8 on the list, the chair pillow in Civil War fabrics: 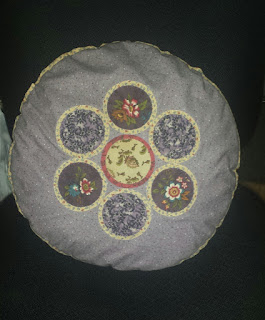 This is a free pattern on the American Patchwork & Quilting website that I had long planned to make from my CW scraps.  It also gave me a chance to use my new Accuquilt Go! cutter to cut out the applique circles.   However, it is not totally complete because the pillow insert I bought for it turned out to be too small (and you'll see in the picture below how I got the shot above).  This happened even after I realized that the insert I bought prior to making the pillow was going to be too small and then returned to the store and exchanged it for a larger size.  Unfortunately, even the replacement was not big enough to fill the pillow and since it was the largest size round insert they had, I was still stuck.  However, I have a plan --- 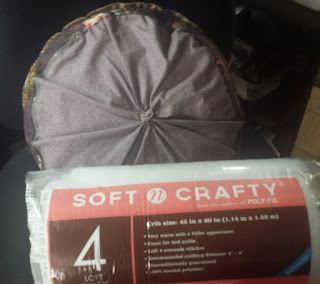 This week I bought some high loft batting and I'm going to try to pad out the insert I have to fill the cover out completely.
That said, for the rest of this month some of my previous "words of the year" will need to be heeded.  "Purposeful" (2015) and "Focus" (2012) will rule the work plans for June.  So some things from previous GID agendas will appear again while some new things that I want to get done will be added to the list.  So here's what's at bat for June: 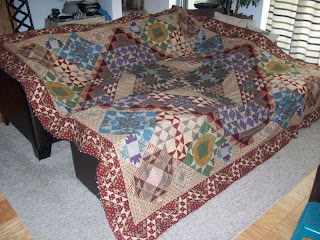 The last time this one was on the GID list was in March.  Since I'm expecting guests again this month, our new guest set up will utilize a (soon to be delivered) high riser bed.  When set up, the two twin mattresses on it pushed together will offer my quests the equivalent of a King size bed.  My own bed is queen-sized so all of my bed size quilts (both made and planned) are that size.  Despite being tempted to source and start a new King quilt project, I decided to try and finish this one instead.  It is huge so is closer to King than anything I have. It's also long over due for completion and will complete the primary phase of my Civil War quilts series so I welcome the chance (and deadline!) to work on it. 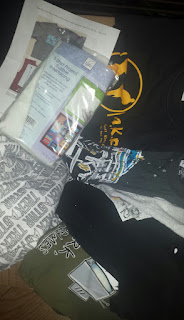 This one was on April's GID list for decorating purposes and represents the most important of the projects in that category that I need to get done.  I had picked out all the shirts I wanted to use for this project back in April (and there's one more in use that will be added).  I had bought that pack of t-shirt quilt interfacing sometime last year when I happened to catch it on sale.  This will be the first time I've attempted to make this type of quilt so hopefully it will be a fun learning challenge too. 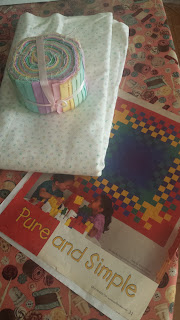 Although I've had a baby quilt on my lists since the year started, this is actually a different one from the one previously planned. This is a commission project that I'll get paid for so it'd be good to get it done. 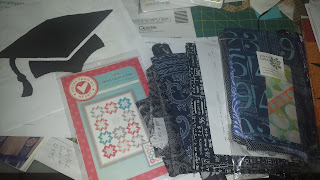 In the course of the last two month's events, I met a family friend who is finishing up a degree.  She saw one of my quilts and wanted me to make one for her for her graduation. Unlike when we quilters usually get this kind of request, she totally understood when I told her she'd probably have to wait a while for it and uncharacteristically for a "Quilt Muggle", she fully expected to pay for it and understood it wouldn't necessarily be cheap!
However, I was also inspired by the effort she has made to complete her studies especially during the difficult time we were going through --- so much so that I immediately searched for and found a pattern I liked and began searching for fabrics and graduation applique motifs to bring it to fruition.  In the end, I may wind up gifting it to her but let's see if I can get it made first!

I had planned to put making QOVs on the May list in honor of Memorial Day but since I never even got to make up that list, here it is now!  It also has a decorating component to it so with guests coming and the patriotic season still in force until July 4, now is a good time to try to get at least one of these done for donating.

6.  (Not a quilt but quilt related)  Terrace Barn Sign


It stayed pretty cold here almost right up to Memorial Day so it was only last week that I finally hosed off my terrace, uncovered the patio furniture and got all the planters filled.  Although there were two quilt-related projects on the April list for out there, the barn sign is the top priority for me right now.  I had prepared the wood last year and have finally decided on the design I want to use so it's just a matter of getting to the taping and painting!


So that's it, hopefully doable and hopefully more regular posts to follow!  Here's to a productive June!
Posted by Vivian at 12:52 PM 2 comments: