Checking in for the Start of April

Can you believe it!  I went to a gardening conference on Saturday and spent the day in our community garden on Sunday getting to see things like this coming in..... 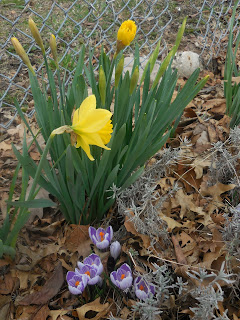 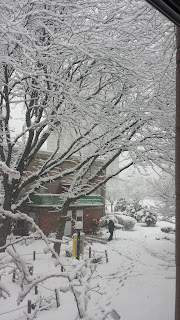 Prince was right:  Sometimes  it DOES snow in April! 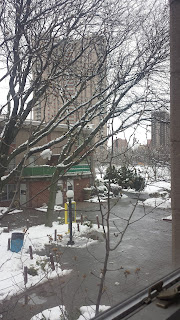 Temps are expected to stay up and we're suppose to get rain for the next two days so it'll probably be ALL gone by then!

Admittedly, since my mind has been on the start of the gardening season, it hasn't been snowing progress in the quilt studio.  While I got the wholecloth basting finished last month, I still haven't put it in the hoop so there's that to do this week. 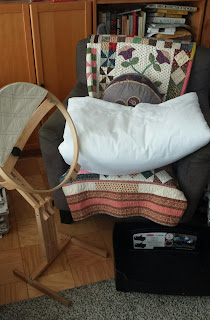 I'm hoping to be able to pile the bottom of the quilt into that bin while I'm stitching so it won't be all over the floor while I'm working.

I had planned to work on my DWR as my other "Bucket List" project for the start of the year. 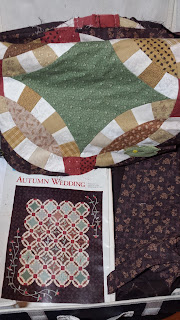 Rachel Hauser of the "Stitched In Color" blog has been hosting a "Big Bed Quilt-Along" that is supposed to end this month and the DWR was supposed to be my project for that.  I thought I'd have already gotten started on it by now but there's still a chance to focus on it this month and at least get the top done by month's end (she said, fingers crossed).  I had finished the piecing of the center back in August 2012 (although looking back, I realize I never posted about that!) and cut out the borders back in April 2015.  Now I need to add the applique onto them.

In anticipation of the applique work, I decided to treat myself and sign up for Sue Pellan's "My Magical Garden" BOM.  For the blocks in it, she is using her Leaves Galore and Hearts and More templates. 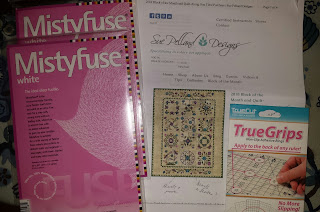 The first two blocks of the BOM were just posted this week and I'll see if I can learn how to use her rulers to create the leaves for the DWR borders.  After I signed up, I bought the grippers for the rulers that she recommends and a couple of small packages of Mistyfuse.  While I'll use the fusible for some test leaves, I don't plan to fuse the leaves to the DWR.  There are leaves already appliqued to the center of the top that were machine appliqued using invisible thread.  Since I don't have working zigzag machines at the moment, I can't do that so I'll have to hand applique the borders ones for now. 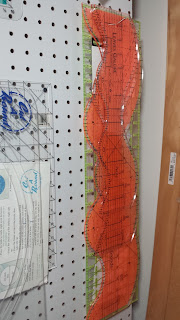 I've had the "Leaves" rulers for years, having purchased them after I learned to hand applique because I thought I would do a lot of those types of projects.  I've done a few but not as many as anticipated and to compound things I now have a lot of Accuquilt leaf dies.  However, I'd still like to learn how to use the rulers since Sue also has some interesting alternative designs that can be made with them like gift boxes and applique bows.

At this point I also don't plan to make the whole BOM -- just a few units or blocks to get the hang of the rulers.  I am budgeting to purchase the Hearts and More rulers in June since the BOM won't be covering use of them until then.

The goal of just getting the top finished is a good one for now since I'll need to get my other machines fixed if I'm going to eventually machine quilt this quilt as desired.  With the weather finally clearing, a trip across the bridge to Queens to have the repairs done is far more likely to happen.  My DH will be on vacation again in a few weeks so maybe I can plan to bring them in then.

Well, back to clearing the cutting table and organizing things (yet again) so I can finish making my project plans for the month!
Posted by Vivian at 9:33 PM 2 comments: