It's the third Saturday in March which means it's:

Of course for me, every day is National Quilting Day but to let the uninitiated join in on the fun, all the big companies in the industry have free project patterns available to inspire people looking to get started on their own quilt journey.  Check out all the links on the Quilt Alliance page which will connect you to all the fun stuff that's out there.

I'm going to "continue in the direction I'm heading" so on my design wall today is..... 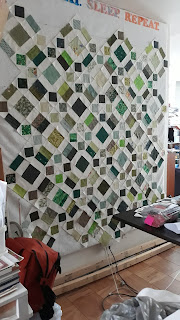 .....my Emerald's project still in progress.   I've been -- much more slowly than planned -- working on this for the last two weeks.  I had hoped to get this done as my homage to St. Patricks's Day however, since that's tomorrow, I guess I have to accept that for this year it will just be a homage in spirit!  Work had slowed on it while my DH was home on "stay-cation".  Having him around all the time meant I got distracted away from quilting so we could run errands and tend to "Honey-Do" tasks.  He works nights and had put in some long hours in the weeks before going on vacation so we also had a pile of stuff on the DVR to catch up on and I admit to not doing much sewing while watching during this time.

Fortunately quilt projects are like that:  you accomplish them the same way you eat an elelphant -- bit by bit.  Just know that no elelphants were harmed during the making of this quilt!  Funny, during this period we did catch up on a lot of episdoes for all the great series about zoos that are on TV now:  The Zoo (about the NYC Zoos and Aquarium) and The Secret Life of the Zoo (about the Chester Zoo in Great Britain) on the Animal Planet channel and Secrets of the Zoo  (about the Columbus Zoo in Ohio) on Nat Geo Wild so we did SEE some elephants!

As you can see the wall is full, however this is not all the blocks to be placed.  I still have one more column and two more rows of parts made up that I need to add.  Once I get what's already on the wall visually balanced,  I'll start sewing it all together in order to make space for the rest to be added.  So the goal now is to have the top finished by the end of  the coming week.

Earlier this week, I also watched a great webinar hosted by Sulky with MJ Kinman, the woman who makes those beautiful Gem quilts.

It was called "Wild-Motion Quilting" and basically she uses an all over flame (or leaf) stitch to create all over texture on her intricately template pieced quilts.  She calls it a low stress form of stitching that creates a "screen" that lets the stitching take a back seat to the quilt design while corralling in the excess fullness that can sometimes build up in a top as it's quilted.  These webinars are available even after they air live so click on the Sulky link to access it if you are interested.

What I got out of it in particular was that after the webinar, Sulky had a thread sale and I was able to pick up some 30 wt Blendables spools that I now intend to use to quilt this top. 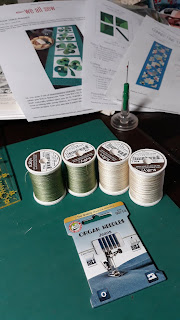 I've long wanted to branch out to stitching more often with decorative threads so jumped at the chance to get some.  They arrived today and the colors look good so I'm going to have to see if this means I'll have to change my original plans of doing a "designed" pieced back for this quilt.  Becasue of how I want to quilt this now, it may be better to just make a randomly pieced or a traditional single fabric back.  In the background you can also see some potential patterns I've collected in the hopes of also making a runner or mat to use up some of the green scraps!

I'd better get back to work since this project also pushed aside some other projects I was supposed to also be moving forward.  I need to put this one to bed so I can get back to all of my intentions for the rest!  Whether you are new to quilting or an old hand, enjoy your Quilting today and every day hereafter!
Posted by Vivian at 6:15 PM 1 comment: