Finally gift #3 for my friend is complete and off in the mail!

This is a jewelry roll done in a crazy quilt style.  As noted before, this gift was started for her years ago and yet is the last of the three gifts I made for her to be completed (#1 can be seen here (near the end of the post) and #2 here).

Originally there was also supposed to be a companion barrel tote to this but after finally getting the roll finished, I ran into problems with the tote and decided that having already made three other gifts, struggling to complete another was just not going to be the most productive use of my time.  Especially when I STILL have another huge and long overdue project to work on and with spring now upon us also very much want to move onto other things to spruce up the house.

A little process:  the roll is the "Bargello Jewelry Pouch" pattern from the book "Quick Quilting" by Kim Ritter.  I apologize for not being able to show a picture of the book --- I can't seem to find it around the quilt space which means it must be buried among fabric for another project. 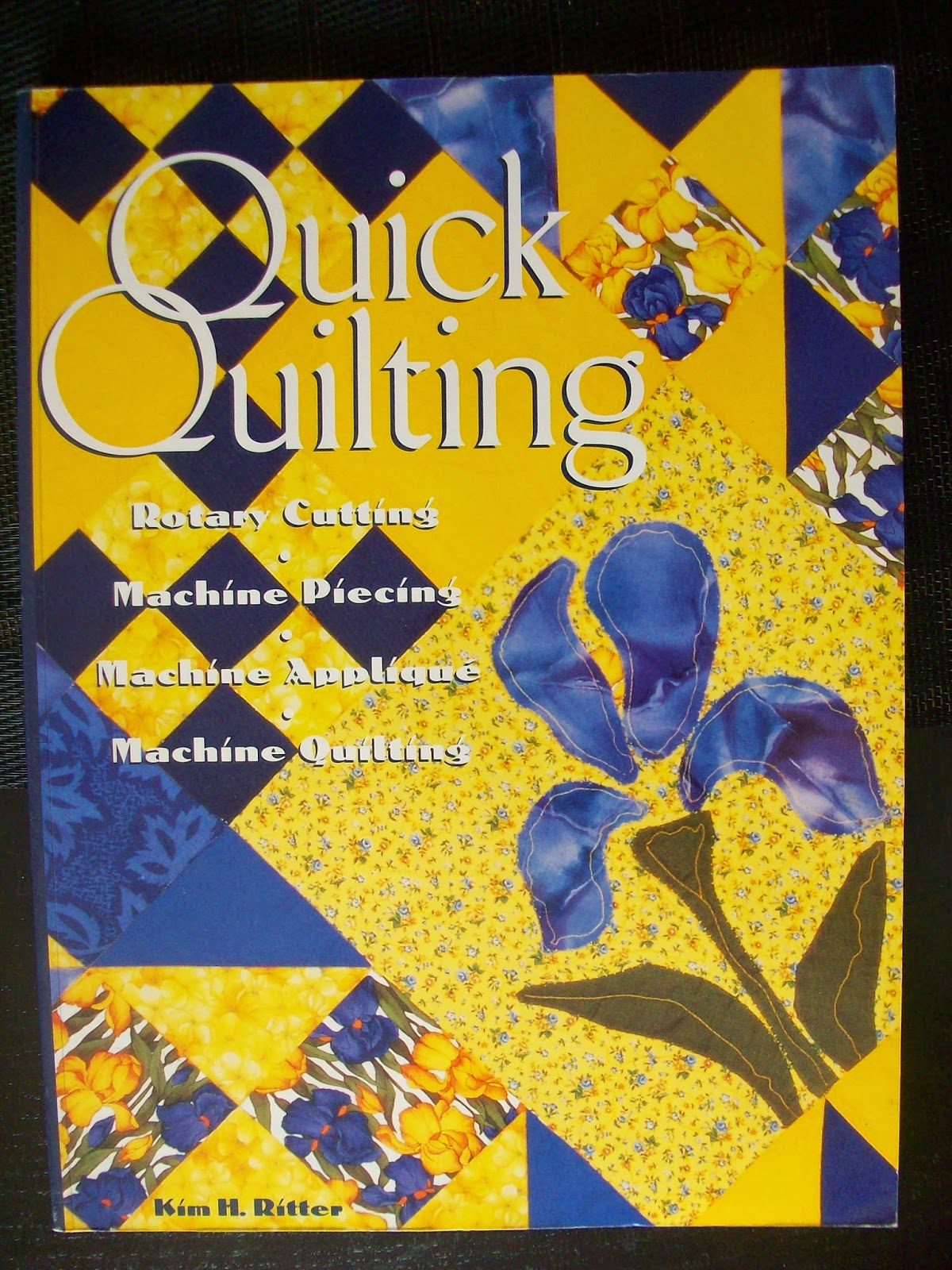 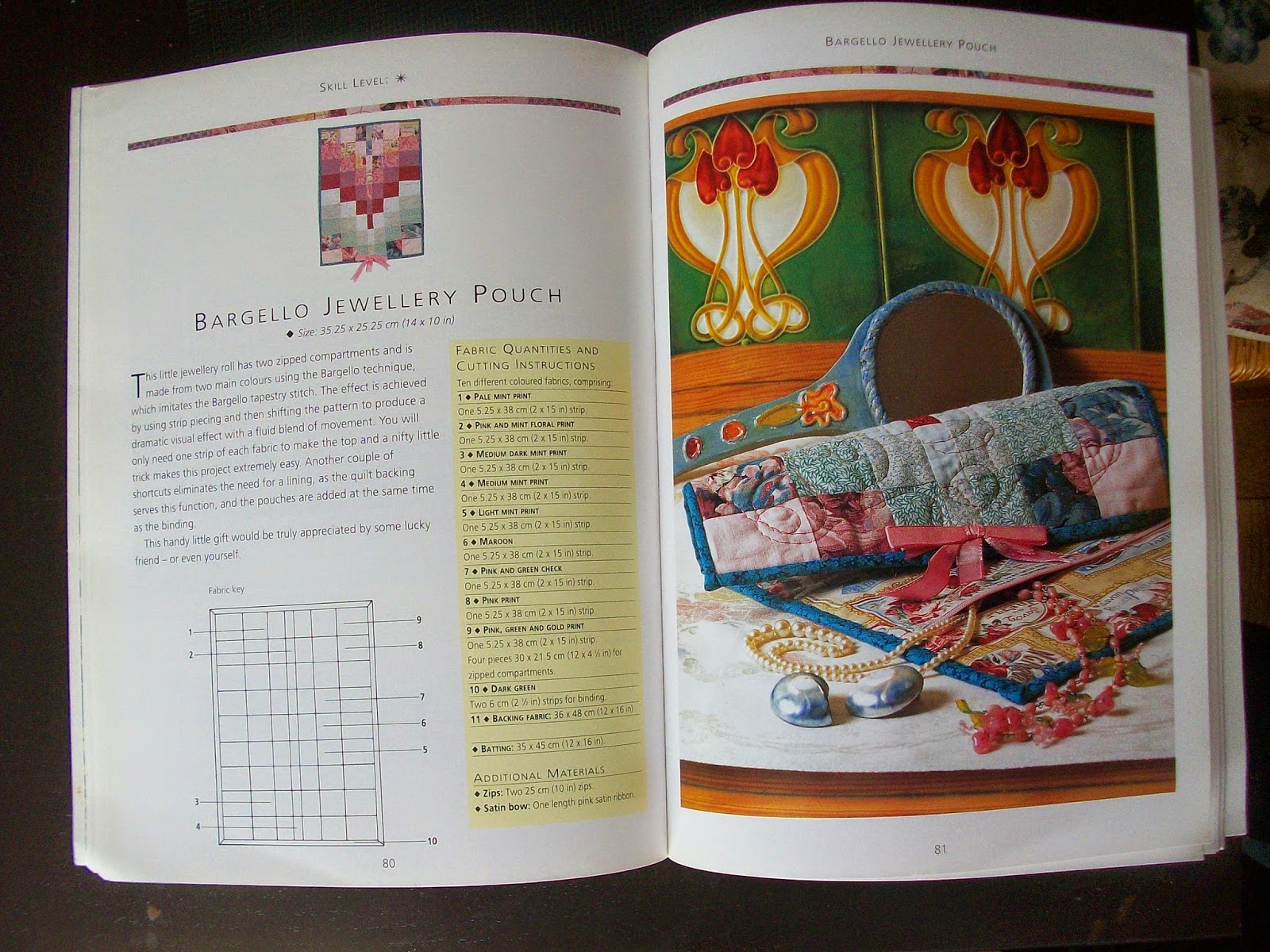 I had made another one of these back in 2004 for another friend of mine using the book's bargello design (sorry for picture quality, these are pictures of "pre-digital" photos): 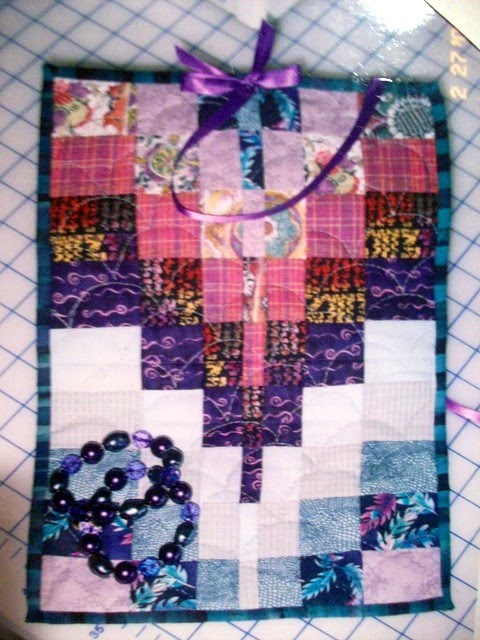 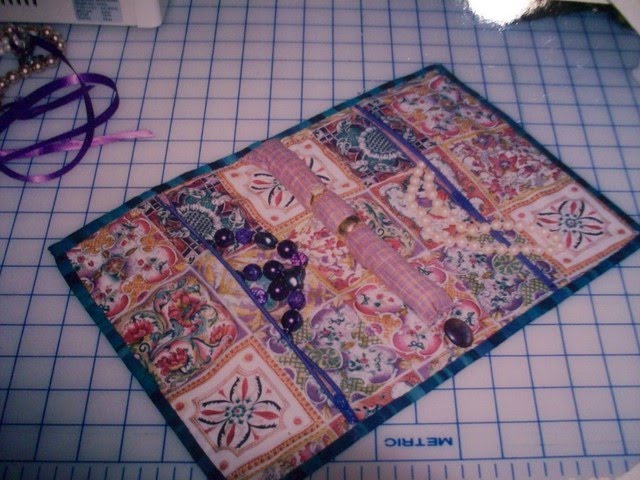 The tube holding the rings (called a "ring roll") was something I added to the design after seeing them in other jewelry storage cases. 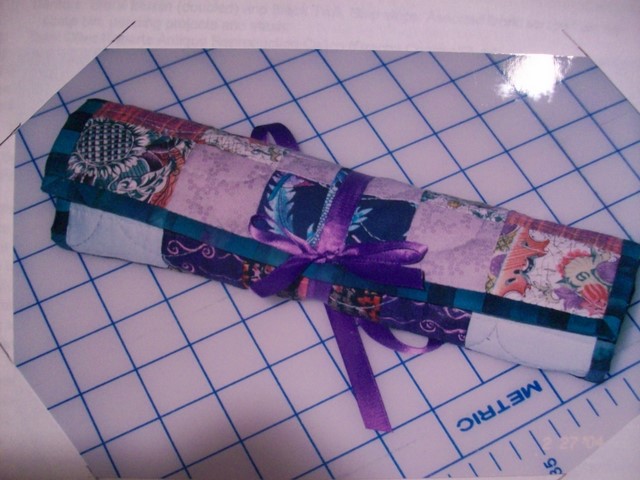 My friend saw that one and asked me to make her one as well.  At the time I thought that the pouch design was flexible enough to try using a different cover style.  Back then doing a "crazy quilt" was still one of my "bucket list" items so I figured it would be cool to try making the cover in that style.

I starting gathering scraps and ideas for the new one in 2007 but admit that it never remained at the top of my focus list for too long hence why this project was still hanging around after all these years.  The other reason it faltered for so long was that I had a lot of big ideas over the years about what I wanted to try on this.  I did add decorative machine stitches along the seams, trims (although not as extensively as planned) and beads (ditto).  Plans to add couching and maybe embroidery motifs were also eventually abandoned as the time factor began to nag at me (hence why gifts should always be constructed in secret --- no deadlines!).

So I am glad I was able to mail this one out (along with #2)  to my friend and she will have it by Monday.  On to the Spring projects!!
Posted by Vivian at 8:53 PM 1 comment:

I realize I haven't posted in a while so I want to post a couple of updates.  I finally got Gift #2 for my friend finished (Gift #1 was finished at the end of last year and can be seen in this post).  This was a panel she purchased when we attended last year's Mancuso New Jersey Quilt Fest.  I should have quilted it much sooner but I'll settle for getting it finished. I finished the quilting at the end of February and attached the label (by hand) earlier this month. 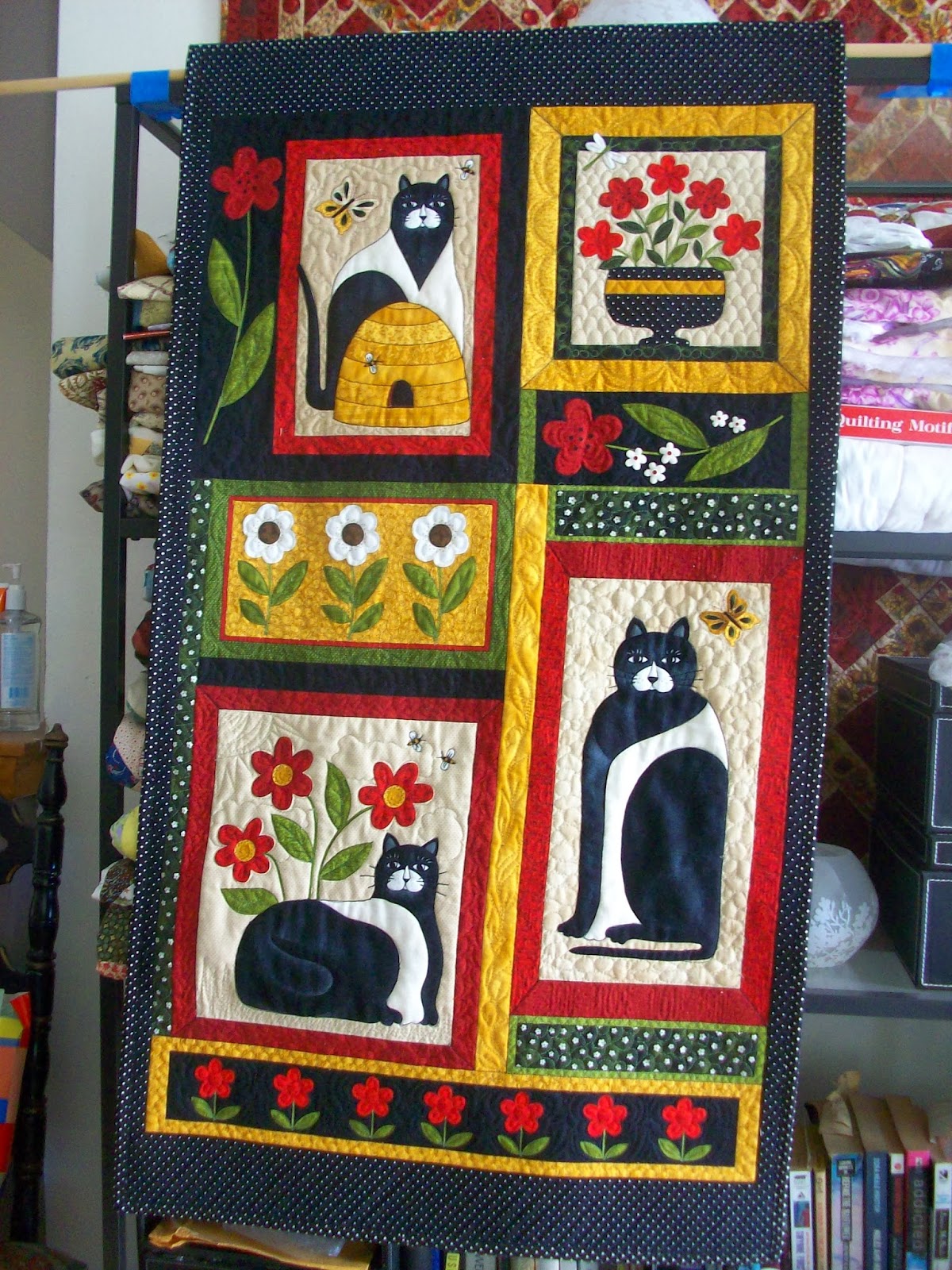 This panel was special because at the time we attended the show, my friend's black and white cat was ill and then died a few months later.  So I call this quilt "Remembering Pepe" and hope it serves as a commorative gift for her.

Another (relatively) quickie project but one that has been on my idea list for a long time is this reproduction wallhanging I'm calling "Honoring the Journeys: 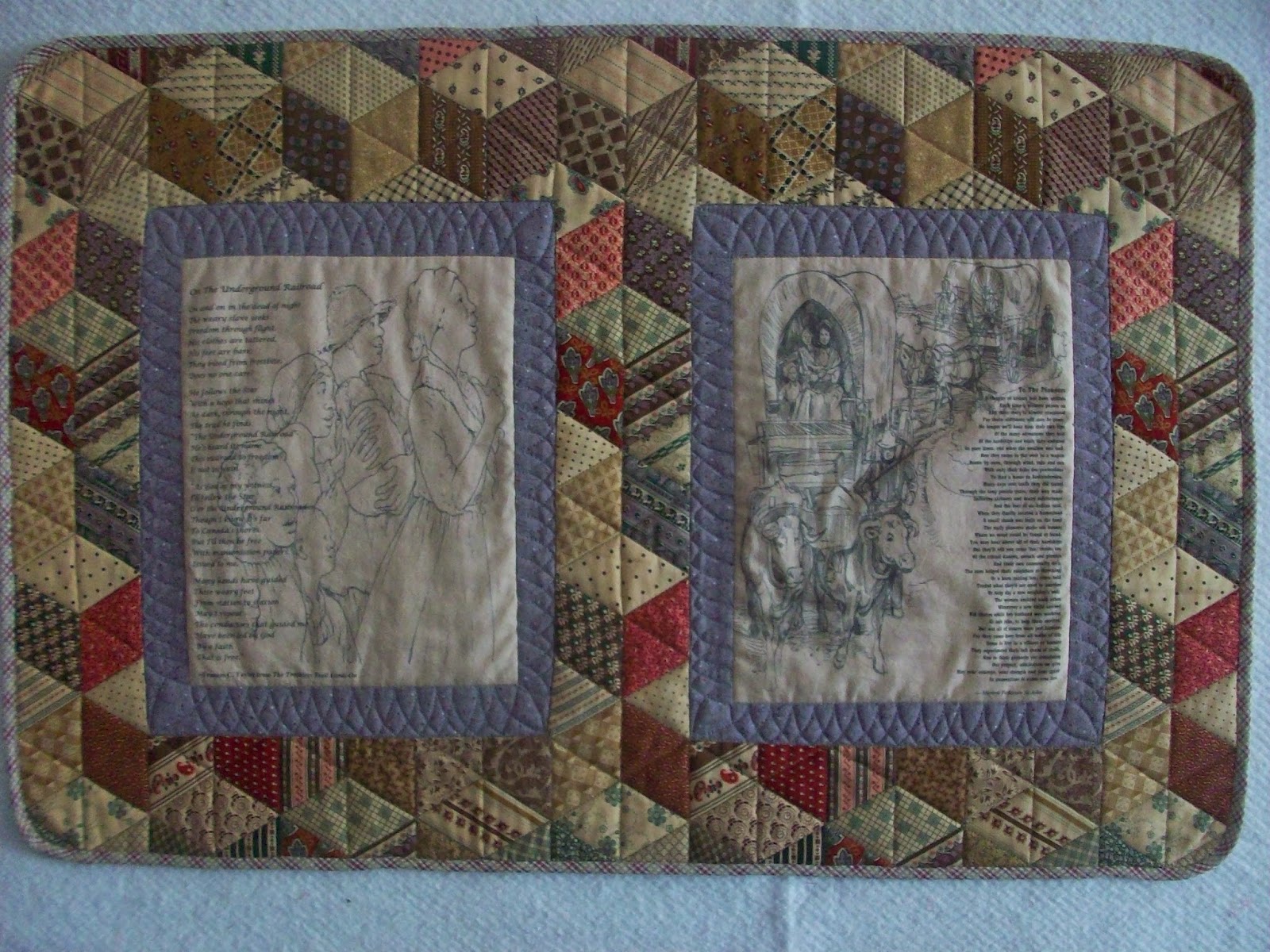 I made it to help fill the wall adjacent to where my Underground Railroad and Pioneer Samplers hang.


I found poems and images on the web about both historical movements and combined them in Microsoft Word so I could print them out on muslin I tea dyed.  I surrounded them with a Judy Rothermel/Rocky Mountain Quilt Museum "Tumbling Blocks" cheater print I had purchased in the early days of gathering my CWR stash.  Originally I had planned to use the fabric as a backing and fortunately I still have enough of it that it might still be used to back a CWR cot quilt I plan to make.  The pictures below it are ones I took of the Frederick Douglass traffic circle here in New York.  There are "quilt code" blocks set into the pavement and the fencing around the circle, most of which are also in the UGRR side of my wall hanging (which can be seen here).

Now back to Gift #3 (the first started and last one to be finished!) for my friend so I can clear my table and finally move on to a big project I've been putting off for way too long.
Posted by Vivian at 11:17 AM 1 comment: