Catching Up On June Pt2: NewFOs and the Red, White & Blue Phase

In my last post, I showed my "Valor" UFO quilt finish.  However, that was not all that went on this month.  There was also a lot of NewFO fun going on: 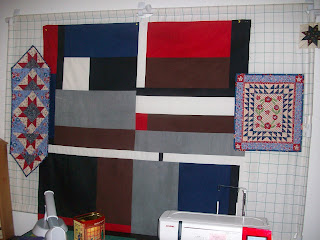 On the left is the "Star Spangled" (finished) table runner, in the center is a "Quilts of Gee's Bend - Blocks and Strips" lap quilt flimsie and on the right is "Tribute", a (finished) mini quilt.  If you viewed the "Valor" quilt post, you probably recognize the fabric used for the runner and the mini -- they were both also made from Pat Sloan's "Tribute" fabric line from 2011 (which still can be found around the web as of today).

UFOs have been my primary focus this year and getting "Valor" done was part of that.  I had discovered the "Valor" kit in the Spring 2011 issue of Fabric Trends For Quilters (now Quilt Trends) magazine.  It had been designed to showcase Pat Sloan's (then) new line of fabric for P&B Textiles called "Tribute".  But also in that issue was a lap quilt called "Tribute" also designed by Pat.  I loved that it was made from the same fabrics as "Valor" as well as that it had applique on it.  Back then I had just learned how to do hand applique about six months prior so was on the lookout for projects to try my new skills on.  Having already decided to buy the "Valor" kit, I had hoped that like most kits, there might be a generous amount of fabric left from the primary project that could help jump start this one too.

"Valor" was completed as a top in 2011 but not quilted until this year.  By this time I had also purchased the Gee's Bend kit and looked forward to making it to display on my (brown) couch during the summer months between Memorial Day and July 4th.  So I didn't have a need for another patriotic colored lap quilt even though I still wanted very much to make Pat's "Tribute".  So the solution:  make it a MINI! 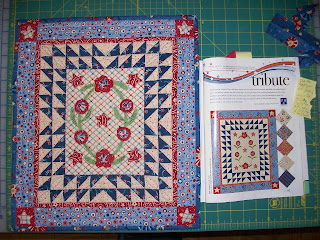 The original lap quilt was designed to finish at 40"x 46".  My mini finished at a little larger than 14"x 16".  With the piece that small, I didn't do any hand applique after all (this was all fused with zigzag around the edges) but I did get to really stretch my ability to figure out just how small to go with all the design elements and still make the quilt look like the original.  I did have to change a few of the fabrics and eliminate a few design elements to make it all work but in the end, I think it's a pretty good approximation of the original.  I was particularly aided in that process by Quiltmaker Magazine editor Diane Harris' blog article on "Fabric Scale" that appeared on the Quilty Pleasures blog during the week I was working on this project.  What's even better is that I have a display space in my dining room for mini quilts so this patriotic beauty will get to be on display ALL year long!

The other new finish was a table runner called "Star Spangled".  The pattern for it appeared in a magazine:  Quiltmaker's July/August 2011 issue.  I think I had received it just around the time I was either contemplating or had already purchased the "Valor" kit.  So of course it was another case of "hey, this will be great for the kit leftovers!". 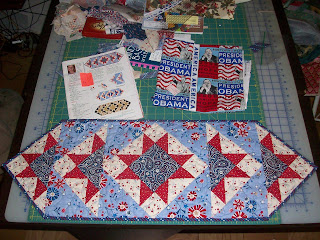 As noted when I talked about "Valor" in the last post, I had actually purchased some more of this fabric line during a Fourth of July sale at Fabric.com.  During that sale I also picked up that Obama 2008 print.  When plans to display it somewhere else in the house were preempted, I decided to take a little of it and use it for the backing on this runner.  "Valor" will be displayed off of our terrace on July 4th and while sitting out there I can also use "Star Spangled". 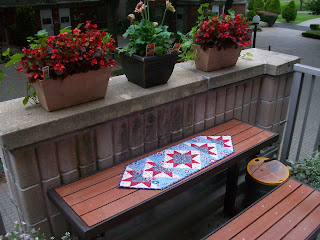 And last but not least is this flimsie made from one of the "Quilts of Gee's Bend-Quilter's Collective History" Kits by Windham Fabrics.  The design is based on an original quilt by Loretta P. Bennett that was interpreted for the kit by Debby Kratovil and the fabrics are all hand dyes. 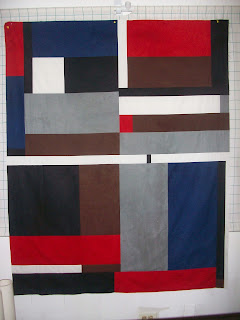 I realize that a kit is probably an ironic choice for attempting a quilt in the style of a Gee's Bend quilter since their quilts are truly improvisational and "make do" fabric-wise.  But I really chose this because I liked the colors of the quilt and haven't had an opportunity to use hand dyes before.  Oh and there's the fact that the kit was on sale and I love a good kit sale!  I've also been warming up to "modern" quilts and thought this design reminded me of the modern style.  I'm actually planning to try some of the modern quilt stitch patterns when I get around to quilting this.  It was extremely quick to make up -- definitely a "quilt in a day" because that's exactly how long it took to make! Although that time did not include pre-washing the fabrics (something I never do but highly recommended for these fabrics) and the cutting.

I've seen another one of these kits for a good price so might buy and make another one.  I have a vow that along with UFO busting I want to complete any new projects I start this year so that I don't  add to the UFO pile I'm trying to whittle down.  But for now, this one will sit for awhile as I move back to projects already on the UFO list.

I'll link this post to Barbara's June NewFO linky at the CatPatches blog once it's up.  Bye for now! 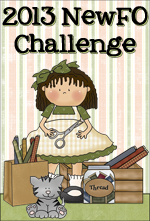 Catching Up On June Pt1: Another Quarter 2 Finish: Valor

I haven't blogged all month but you'll see from this and the next post that June was a busy quilting month for me.  First up:  UFO #2 for this quarter (and #4 for the year) is done!  Pat Sloan's Valor quilt is quilted and bound!

Edited to add:  The link to my original Quarter 2 Finish-A-Long List is here. 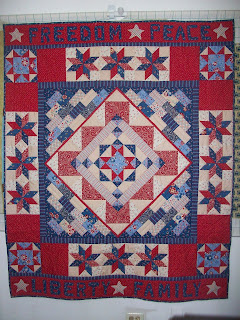 This one started back in 2011, the year we moved.  I first saw it in the Spring 2011 issue of Fabric Trends For Quilters (now Quilt Trends) magazine (when Mark Lipinski was still the Editorial Director).  I don't know what attracted me more: that it was a Pat Sloan design (of whom I'm a big fan) *OR* the Red,  White and Blue fabrics which I had been collecting because I'd been jonesing to make some Quilts Of Valor *OR* the Lemoyne stars (which gave me an excuse to invest in Deb Tucker's tool) *OR* that it came in a kit which (as always) I was suckered persuaded into believing that would mean a fast turnaround for the quilt *OR* the "dream" that I could have a new quilt to display in our house for the patriotic holidays.

Probably all of the above was enough to make me ignore unpacking boxes that year and rushing to buy the kit and few additional pieces from the "Tribute" fabric line which Pat had designed for P&B Textiles and had been newly introduced that year (and still can be found around the web).  The additional pieces that I purchased were not used in the quilt so were not included in the kit.  Unfortunately I didn't get started on it until right before the July 4th holiday that year (and in fact worked on it all during the holiday) and finally finished the top by the end of that month.  I thought it would get quilted before the next year's holiday rolled around but that was not to be so.  And this year it was on my list to be quilted in April, then got bumped up to the May schedule and yet still took until this month to complete.  But a finish, is a finish no matter how long it takes to get there!

Pat's instructions called for the Sawtooth and Lemoyne Stars to be made using triangle squares (HSTs) but I made the Sawtooth star points as Flying Geese blocks and used my favorite method for those:  Eleanor Burns rulers and what she calls the "Triangle Pieced Rectangle" method.  I call it the "Two Squares" method because that's all it takes:  two squares and sewing 1/4" on both sides of a center diagonal line twice and then you have four geese!  You can see Eleanor herself demonstrating the method here.  It should be noted that in the video Eleanor also squares up the blocks with a regular ruler but I will say that using her rulers (if you are willing to make that investment) does make the trimming go faster.

And what can I say about Deb Tucker's Rapid Fire Lemoyne Star ruler except that "I'm a complete convert"!  I always shied away from making Lemoynes because of the diamond unit cutting and set-in seams.  With her ruler and instructions, Deb has made it possible to strip piece these.  Now I'm collecting Lemoyne quilt ideas because I want to do more, more, more with this one!  I also love and have used her Tucker Trimmer ruler and have the Hunter Star ruler but haven't tried using that one just yet (yep, I'm a gadget fanatic!).

It should be noted that using these two methods meant I wound up being a little short on the background fabrics from the kit but as always the Quilt Gods were looking out for me.  Fabric.com just happened to have a "Red, White & Blue" fabric sale the week I started on this and was carrying the fabric line at that time so I was able to do a little discounted stash enhancement to help continue the journey (as well as start some new ones as you'll see in the next post).

So very happy to be 2 for 3 for this quarter and look forward to hanging this one outside off of our terrace for the July 4th holiday!
Posted by Vivian at 5:52 PM 3 comments: