Unfortunately, all the recent hyper-productivity I've been fortunate to get to do lately and my plans to focus on machine quilting will be on hiatus for a while.  A health condition I had been monitoring recently took a turn which requires surgery which also means an extended recovery period.  So if the blog is quiet, know that I am not among the missing, just need to take a step back to focus on my health and strength for a while.  I may also not be able to reply to comments for awhile so again, if I do not respond know that I appreciate your comments none the less.

Prior to the procedure, I had set up some hand work projects since I don't expect to have the stamina to sit at the machine for a bit.  With any luck, I'll be able to post about those in the interim.  I also set up all of my machine projects so they are ready to be returned to when I have the strength to do so.  Looking forward to putting this to good use when I do:

I'm hoping this won't be too long a break.  The good news is that a recovery period will mean more time to blog surf so I look forward to checking out the posts of all my favorite bloggers while recuperating.  This means I get to comment more frequently than I have while I have been in my "Quarantine Quilting" haze.   Recuperation does have its blessings!
Posted by Vivian at 9:20 AM 3 comments: 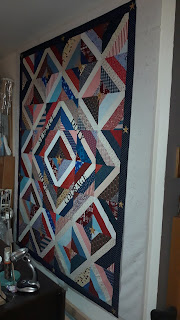 The main reason I decided to add borders to the top was to bring it to the minimum size needed for a Quilt of Valor.  My finished block layout had been a few inches short of the minimum width for a QOV.  However, to keep it balanced, I added the same borders to both the sides and the top and bottom.

I think in the end it also helps to corral the busy center and bring more focus to the words in the center medallion as compared to the layout without borders.  Additionally, it offered another opportunity to add more of the star appliques which I think brings out the ones in the center even more too.

Some recent developments have upended my quilting plans for June.  Will have to see going forward how everything pans out.  I will say that my Quarantine Quilting frenzy has been nice while it lasted!
Posted by Vivian at 12:39 PM 2 comments:

Quarantine Flimsie #3: I Should Have Seen This Coming.....

Oops, I did it again!  Introducing the "Hope" - Quilts of Valor edition:

On her last "Tipsy Tuesday" for April, Gudrun Erla of GE Designs announced that she was doing a another quilt along as a follow up to her very popular "Elvira" Quilt Along that happened at the end of March.  Naming the new quilt design for this round "Hope", this time she charged a nominal fee for the pattern with the proceeds of the pattern sales going to three local charities in her area that are serving the needs of people affected by the pandemic.  To date, $35K was raised -- way to go Quarantine Quilters!

As with the previous QAL, the final pattern was issued on a Saturday and Gudrun hosted a series of live video tutorials on Sunday that included interviews with quilters from the quilting industry such as Pat Sloan, Doug Leko and Lissa Alexander.  Details of the Hope QAL2 are here.

I really hadn't planned to participate in another QAL -- having already made "Elvira", at the time I was still in the midst of working on Edyta Sitar's Mystery QAL, had two other projects inspired by quarantine posts waiting to be started and was also involved in mask making.  Not to mention there was all the other projects I had going on before the quarantine!  I figured my plate was already full.  However, all it took was the sight of it in the video: 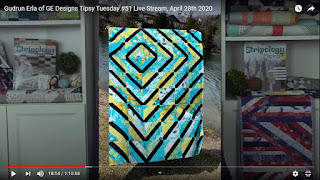 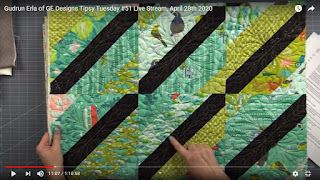 ...and realizing I had a ready source of stash for it on hand: 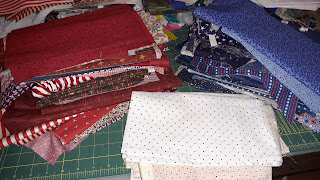 ......and an idea was hatched:  this would make another great Quilt of Valor top!  This is the time of year I think about making RWB quilts and have been compiling a bunch of QOV quilt tops and project ideas.  So of course, the idea that this could be another one immediately appealed to me!  Add that this looked like another quickie top to make and used the Stripology ruler (I have the original ruler, the link is to the updated Stripology XL) meant that this Gadget Fanatic was ready to go!  Made up of two simple blocks,  I started the cutting on the Sunday of the event and finished it up Monday: 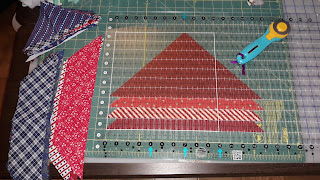 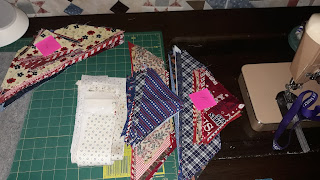 Once cut, the piecing was quick to do Monday night and it could play "follow the leader/ender" with the Sitar mystery blocks as they were being put together as a top. 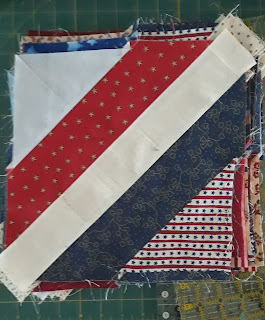 Tuesday morning, I was ready to square up the blocks. 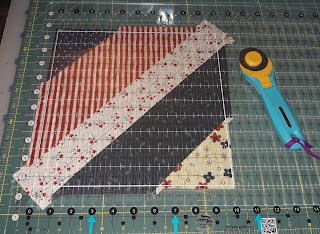 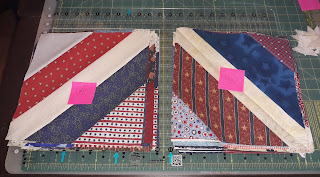 This actually made me kind of happy since I always hope I can get to do some RWB sewing during what I call the "patriotic months" (between Memorial Day and Fourth of July).  With the pandemic,  I'm not sure if or what kind of Veteran's Day ceremonies may be scheduled come November but I can add this one to the "To Be Quilted" pile for whenever I am able to donate these in the future.

Once the blocks were done, I had to go back to finishing up the Sitar Mystery because it took up the whole design wall which I also needed for this project.  Once the Sitar top was finished, I could move on to laying out this one.  Gudrun provided a choice of layouts in the pattern.  It was also inspiring to look at other layouts done by other people participating in the QAL. 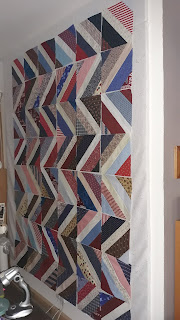 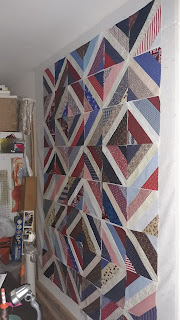 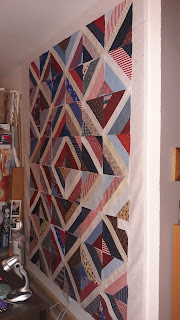 In the end, I chose the last one which Gudrun called the "Medallion" setting because I could envision it with embellishments to add to the QOV theme. 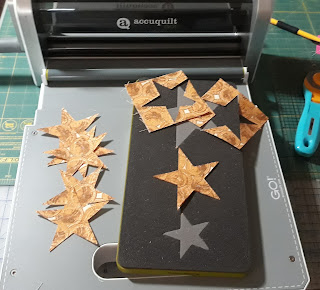 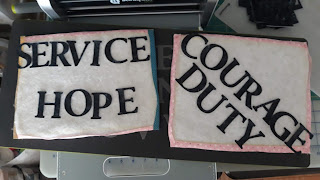 As Gudrun promised in her pattern and video tutorials,  sewing the blocks together is a breeze because of the way the blocks are designed:  the cut strips for the two different blocks are not the same size which means that along the sides of the blocks, there are almost no seams that come together.  At the few points where they do, they are already pressed in opposite directions so easily butt together.   I decided to try using Bonnie Hunter's “webbing” technique for the first time to sew the blocks together.  That calls for lapping each consecutive column of blocks on the previous row and sewing those seams continuously which will keep the rows “webbed” together by the connecting threads (no pun intended!) down the columns until you sew the rows of blocks together.

One thing I learned as I went along is that when you reach the end of the sewn columns, you do need to be able to pull them completely out of the machine in order to pin together the next column of blocks.  This is another place where having some “leader/ender” piecing units comes in handy.  With all of the top put together, I fused on the appliques to await them being stitched down.  Once that's done, this top will be ready for quilting!

I now really look forward to following along with Pat Sloan's June quilting prompts.  After some warm ups I'll quilt during this month, I hope (no pun intended!) to have the confidence to finally tackle the (now) pile of QOV tops I have as machine quilting projects for July.  Fingers crossed!
Posted by Vivian at 6:18 PM 3 comments: