Back (Again) From the Abyss

Whew!  It's been a very long time since my last post.  I still haven't got to the point where blogging is integrated into my life well enough that I post regularly.  It seems it's always feast or famine with it.  But I'm back now even though I've also missed out on a lot.  But I am hoping to finish out the year with a bang rather than just whimpering!

When I last posted I had just purchased some long desired rulers, one of which I had hoped to use on a commission charity quilt project that I had signed up to do with another quilter.  I also had started the very big job of painting about half of our home and I had an upcoming week-long trip down south to three states.  Added to that my oldest son, having graduated high school in June, was still in the process of deciding whether to attend college or start working.  Oh and throw in that I had made a very big and ambitious list of projects to try to tackle for the Third Quarter of Leann's 2013 Finish-A-Long.  For some silly reason I thought all those juggled balls would fall neatly into place one by one.  The plan was that by September, I would be cruising, smoothly, to finishing up my own summer quilt work as well as the commission project.  After that I would move on to a few fall projects I wanted to tackle and then set up my "To Do" list for the final year end push.

Ha!  What's that saying: "Announcing your plans is a good way to hear God laugh” (attributed to author David Milch).  In the end, only some things got done and none of those finished up as quickly or smoothly as expected.  When delivery of part of the materials for the start of the commission project was delayed, my need to focus on all the life stuff only delayed the start even further.  My son made his decision at the final hour (choosing to go to school) but then that added additional chauffeuring work to my daily schedule further changing the rhythm of my days.  So I am only now getting settled back into my little quilting world.

I can tease a picture of one project that did get done during this time and hope to do a post in the coming weeks about how it relates to bigger changes in my "studio" space. 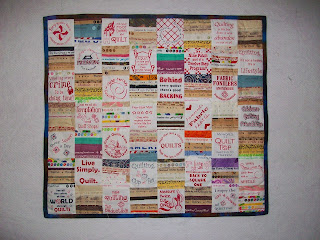 Oh, before I leave, I also want to shout out the Fall Bloggers Quilt Festival hosted by Martingale author Amy Ellis that is going on right now at her website, Amy's Creative Side.  This is the wonderful biannual on-line quilt show that happens during the big Quilt Market weeks. 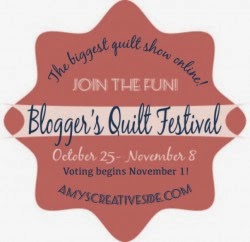 So first chance you get, go on over and check out what the entrants have posted for this round.  I've still got a couple more categories to check out too.  Don't forget to vote for your favorites!

Hopefully, I'll be back with another post sooner than last time!
Posted by Vivian at 1:22 PM No comments: