When I did my "Get It Done!" recap for June, I said I would do a detail post on the Barn Quilt I made. This is the picture of it that I had shared before (as it's seen from street level): 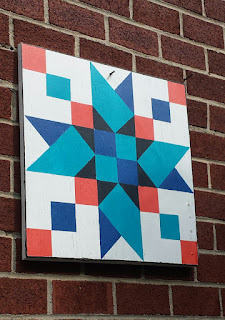 I've always wanted to do a barn quilt for my terrace wall.  In the past, I have displayed a large grape ivy wreath there during the fall/winter seasons.  I'd decorate it with faux fall foliage and then drape it with evergreen pine boughs and ornaments for the Christmas holiday.  I've also always loved the articles I've read about Barn Quilts.   Since I'm big on using quilts as decoration, I figured that as a quilter, an exterior quilt block would be another way to announce my "hobby" to the world.  My plan was to use the signs for outside decoration in the spring and summer months.


I had mentioned this more than a few times to my DH.  One day in 2013 he found a big board of 3/4" thick pressed plywood discarded along his delivery route (he used to be a UPS driver but now drives their tractor trailers) and brought it home for me wondering if I could use it to make the "signs" I had so often talked about.  I was encouraged by his support since usually when I do these DIY type things he's skeptical (aka, thinks I'm a crazy lady) at best.  After getting the wood that year, I finally bought my own circular saw (always wanted one!) and cut the board down into two approximately 24" square pieces.  I figured I could paint on both the front and back of each and have four different block designs to make and display.

We have a big heavy nail driven into the back wall of our terrace that was left from the previous tenants (good because we are technically not allowed to nail into the outer walls).  It's the same one I hang the wreath from so I drilled a hole in the top of each board for that.  I stocked up on water based craft paint at the local Michael's when they had sales.  But I admit I dragged my feet about the actual painting, primarily stalled about what block designs I wanted to do and what colors I wanted to use.

Then in 2014 I saw that the always inspiring Elaine, who blogs at "Elaine Adair Pieces", posted about a Barn Quilt she painted as a gift for a friend.  Check out her work on it here:
http://elaineadairpieces.blogspot.com/2014/07/making-quilt-barn-blocks.html
Elaine had also previously painted some blocks on the side of her "barn" (aka her garage):
http://elaineadairpieces.blogspot.com/2013/08/barn-blocks-lady-of-lake.html
When I saw Elaine's post, my enthusiasm for the project was renewed!  She and I exchanged a couple of emailed conversations about what she had done and I realized that there were quite a few tips shared in her posts (oh, the power of blogging!) that gave me the confidence to push forward on this again.  Unfortunately, I had read her post towards the end of September so decided to wait until the next spring to try again.  Yeah, that would have been Spring of 2015 --- well, better late than never!  When this year's Spring season started late and I finally got my terrace cleared off and planting set up after Memorial Day, I decided that this would be the year to finally get this project done!

One of the first helpful tips in Elaine's post was to treat wood that's not smooth by sanding it a bit before painting.  I had always planned to paint a base coat first but found the next tip in her post -- to use an oil-based house paint as the base coat -- to be another very good idea since mine would hang outside in the elements.  I had also always planned that after using the craft paint for the block colors, I was going to seal the whole thing with polyurethane afterwards to further protect the design from the elements.


The other good tip I got from her post was the idea of being conscious of using good contrast when choosing the colors for your blocks.  The wall my block would hang against is red brick so when I started to consider colors, it was like we always say in quilting "color gets all the credit but value (and contrast) does all the work"!  So I took that into account when I began to look around for a good quilt block to render.  Fortunately, just then I got the monthly e-newsletter from Quilting In the Country and it featured the popular "Barn Quilt Trail Midwest Medallion Quilt" by author Suzi Parron as a Block of the Month project. 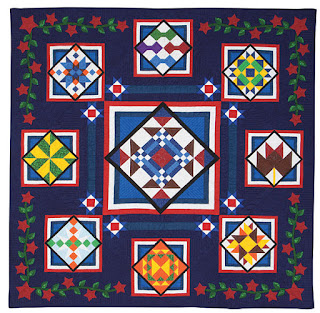 Note:  Quilting in The Country is no longer operating as a retail shop but still offers items online, although not this one.  If you're interested in a kit for the Medallion quilt, you can find it at Connecting Threads.

My eye was drawn to the block in the upper left hand corner.  I loved the blue and white and the use of orange, an analogous color to red, made it a perfect color combination for the patriotic summer months, not to mention pleasing to me as a NY Mets fan!  So with Elaine's tips and now a firm block plan in place, I was ready to go.
I set about working on it just prior to my MIL (also a quilter) coming to stay with us for the second time this year, deciding that this would be a good "welcome" piece for the house.  So even if my neighbors or passers-by didn't appreciate it, I knew my guest would!   It took me altogether about a week to paint and dry the white base layer on both sides and the edges (done outdoors on the terrace), tape off and paint the different color sections (done indoors as seen above), touch up some spots after removing the tape and then seal it with a coat of spray polyurethane (back outdoors again).


The good news is that when it was finished and hung, I did get compliments  on it from my neighbors too (as well as the opportunity to explain what a Barn Quilt is and that no, it was not made of fabric)!  On the Medallion quilt,  I also like the block in the lower right corner too.  If I can stay productive as I finish out the summer, I might paint that one to display in the early fall before putting the wreath out.  This was a fun project and another great way to bring quilty goodness into one's life!
Posted by Vivian at 9:00 AM 1 comment:

On the Design Wall: Progress!!

August is starting off well!  The project I talked about here is now here: 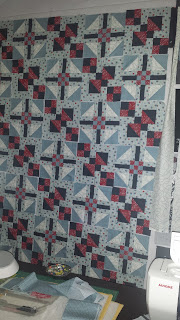 The blocks are all done!  Still have to be sewn together to complete the top.  Now it's time to work on a border/borders.  Since I'm using Judy's book "60 Pieced Borders" to make this, I'm trying to decide whether to go with the original border paired with the center.... 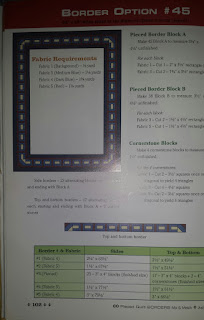 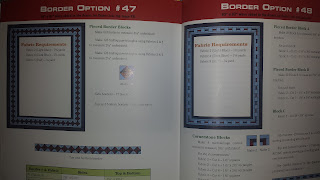 ....or to use a border that is paired with one of the other quilt centers in the book.  Judy has always loved adding multiple borders to her quilts.  Check out this post from her blog from 2009 to see what I mean.  In this post, she talks about how she deals with how tedious it can be to make borders once she's finished the top --- she makes the borders first!!

Well since that's not an option for me at this point, I'm faced with decisions, decisions......
Posted by Vivian at 4:16 PM No comments:

Well, it was another not-so-productive month!  At the start of the month, I THOUGHT I was done with family commitments.  NOT!  As noted in the previous two reports,  my MIL had come up to New York from North Carolina by car in April, and then returned in May and June by train, both of those times staying with us.  During the May trip she had mentioned that at the end of 2015 (long before she knew she would NEED to make trips to NYC in 2016), she had promised her sister-in-law (who also used to live here in NY) that she would drive up with her at some point this summer.  I had assumed that after she had accepted our invitation to come back up in June for our son's graduation, she might not want to make yet another trip up with her SIL.  Again, NOT!!   So once again, we were preparing for a week-long house guest.

This time though, my MIL had decided that since she and her SIL had separate plans for their time in NY, she wanted this trip to be a quilt-focused one.  She brought four quilts for finishing (gifts for people here in NY) and a new project to be cut, laid out and pieced.  She also wanted to visit a couple of "Row By Row" shops which we also did (and I'll get to talk about that in another post).  Despite having learned from her previous visit to set up some "mindless sewing" work for myself this time around, we still spent pretty much all of our time together working on her projects.  So while I didn't get too much done personally while she was here, it was fun having another Obsessed Quilter in the house!  Add a week of errands and clean up both before and after she left and July was pretty much killed for me quilting-wise.

So despite the relatively short July list (which can be seen here), I can succinctly recap a big "NOT DONE" on all of it.  However, while intending to start on item #1 from the list, I wound up working on this new project: 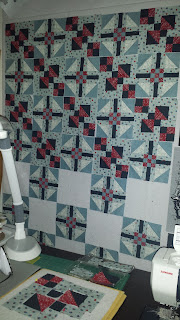 Details about that can be read about here.

So For August, once again the list consists of all the carryovers:

1. Quilts Of Valor.  Hoping to get two cut out today so I can use them as "leader/enders" on the above project.
2. The T-shirt Quilt.  Still a big priority since I need it for the house --- not sure why I'm dragging on it.
3. Pastel baby quilt.  Still need to get this commission job done, thankfully (?) there's no deadline.
4. Graduation quilt:  Found a potential background fabric for this one so now I can try to get this at least started.
5. Quilt CW Chronicles:  This one is still long overdue and I'm still looking forward to doing some custom quilting on it so fingers crossed I finally get to it.

I'm also glad to say that other people stepped up to cover the regular shifts I did in July for our community garden so even that commitment (other than periodically going to check on our plot) has also been cleared from my schedule for this month.  Therefore, I'm declaring August a Personal Vacation Month for me and hope to spend it quilting DAILY!!  However, given how the previous months have gone, we'll just have to wait and see what happens.
Posted by Vivian at 9:48 AM 2 comments: