The Golfing Gift Quilt is A Finish! 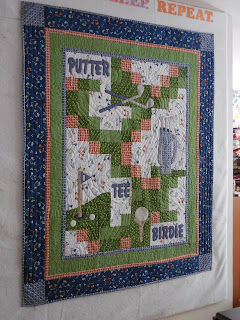 Here it finally is in all its finished glory!  This is "Jon's Gone Golfing With the Mets!" finishing up at approximately 54" x 65" using the "Gone Golfing" pattern by Rochelle Martin of Cottage Quilt Designs.  And just in time too, we'll be heading out to see the recipients (plural, the mug rug I made for his wife is here) this weekend.  If you'd like to read some process posting, please continue.....
This project started out with the "A Hole In One" fabric line from Clothworks.  I knew my friend's husband is a golf fan but he's also a NY Mets baseball fan and for a long time I debated about which of his interests to use to inspire a quilt.  This fabric line was perfect because it channeled the theme of the first and the colors of the second. 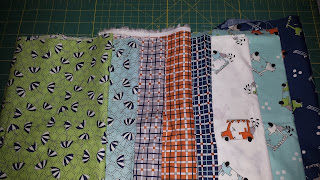 Add some MLB fleece for the back to add the actual baseball theme to the mix and I was on my way! 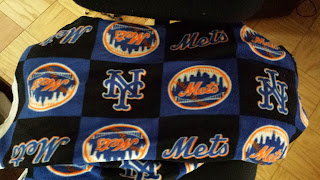 Once I had the fabrics, I still needed a design to apply them to and when I saw the "Gone Golfing" pattern, I could immediately see the golf fabrics applied to it so now it was a "PIGS" (Project In a Grocery Sack) in a poke! 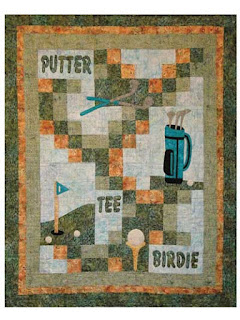 It also helped that I was already familiar with this designer having made another one of her patterns three years ago (see it here).  Since using all the fabrics in the line didn't work for the pattern design, I had to add a few others to bring it all together.... 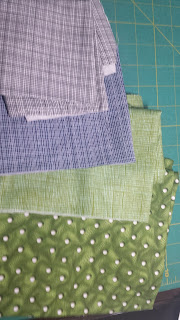 .....including key tone-on-tones from my "Freckles" (by Northcott) stash. 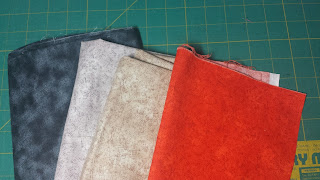 Construction-wise this one was all about strip piecing and fusible applique.  I had to change the pattern's borders to accommodate the amount of fabric I had.  I had purchased the "Hole" fabrics as four fat quarter sets because at the time that was the only available source for the white background print. 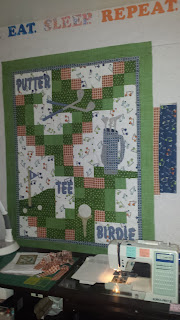 I had worked on this project pretty intensively during Judy Laquidara's Quilt-A-Thons in January and February hoping to get it done for the recipient's birthday but I only got as far as getting the top done then.  (Unfortunately, Judy has since decided to discontinue the QATs and blogging about quilting although you can still visit her for her gardening, recipes and chicken tales.)  Then this "simmered" for a long few months while I decided how to quilt it.  Originally my plan was to just grid quilt it through the squares with a walking foot.  But when I started sketching out some curved quilting, I liked how it looked and realized that it sort of mimicked the topography diagrams of golf course holes. 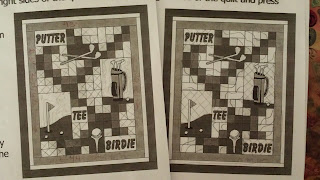 I admit I also thought the curves would be faster to stitch because they could be done free-motion so would stitch out more continuously over the surface but in the end I don't think that was true.  When the center stitching was completed, I stitched-in-the-ditch around all the borders then debated what to do for the wider green and blue borders.  For the green, the solution was to make the pattern's applique letter templates smaller, print them on freezer paper and use them to spell out the names of famous golfers past and present.  If you're watching the (British) Open Championship this weekend, some of these names will look familiar! 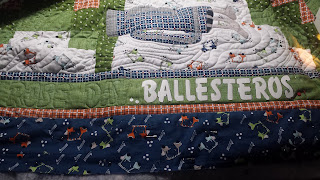 Since the templates were freezer paper, they were reusable multiple times.  I did make multiple copies of some letters that were used more than once in a name or so that I could set up more than one name at a time (A, E, I, L, O, S, T).  One letter doubled for another (M was also W).  Since this pattern only had some of the letters I needed, I had to use some from the author's other pattern (A, C, H, L, M, N, O, S) and like I did for the previous project, make up a few that I needed that weren't available from either pattern (G, K, Y).
Note:  A very handy tool when figuring out how to re-size pattern elements is a Proportional Scale by C-Thru Ruler Co. (now part of Westcott Corp.).  It is available from quilt shops (where I purchased mine years ago), art or office supply stores and even Walmart (although for once, their price is pretty expensive!).  Just turn the inner dial to match up the original size to the new desired size and it will tell you the adjustment percentage. 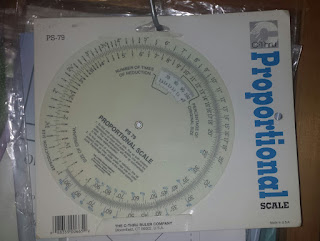 In the past I have cut my own freezer paper sheets from the rolls purchased at the supermarket and that works fine for templates you will trace by hand.  However, when you need to put sheets through the printer, it is hard to get the rolled sheets to lay flat (even after pressing them or sitting them under heavy books for days -- ask me how I know!) so I'm loving the prepared freezer paper sheets I purchased from Martingale Publishing for that. 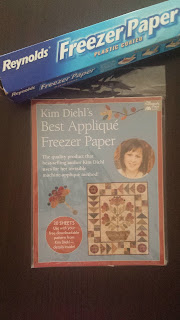 At first I free-motion stitched around the templates using a darning foot but found that it would often get caught under the freezer paper edges if they pulled up.  Something that I haven't use in years came to the rescue for that: 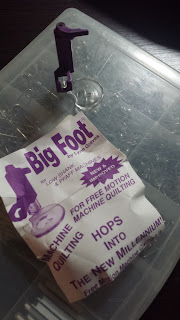 The wide plastic base on the "Big Foot" machine quilting foot kept the freezer paper in place as I quilted around it and that helped a lot to speed the stitching.

For the last wide blue border I decided to just mimic/echo the small orange border and went back to the walking foot for that.   At first I used painters tape (1" wide) as a guide.... 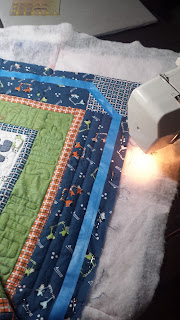 ...until I remembered that my walking foot has a guide bar!  So much easier and time saved not having to reposition (or even use) the tape! 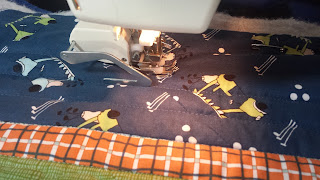 I was a little scared about all the quilting because I have never quilted on fleece (or Minky) before but it was no problem at all.  I had no tucks and I've got to admit, I love the additional texture the quilting added to the plushness of the fleece.  I will also say that just like having a busy backing print, plush fleece will hide a lot of stitching sins too! 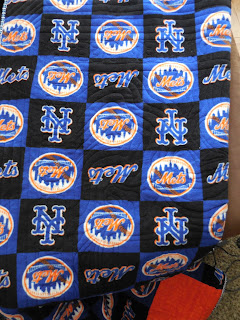 Back when I went to layer the quilt, I found out that the ends of the fleece I purchased were cut very wonky and because my border changes meant that the quilt finished a little larger than patterned, I was a bit short of fleece on the bottom of one side.  Note to self for the future:  buy an extra half yard of fleece so you can even the ends once at home and be mindful of how design changes will affect the overall size of your quilt as you are altering them.
I decided that the solution was to piece in a label area on the short side.  Whatever fabric used had to be light or bright enough to write on.  In the context of the ball team's color scheme, the best color for that was orange.  Fortunately I happened to have the perfect "Freckles" color for that too!  I started collecting "Freckles" prints after getting some as part of a quilt kit years ago (that was for this quilt).   This particular orange was one I picked up on the "half yard sale shelf" that a local quilt shop (that has since closed) used to have.  At the time I really thought this line of TOTs was really versatile and a few years ago when I heard the line was being discontinued I stocked up on as many colors as I could get.  Since the cotton "Freckles" fabric was lighter in weight than the surrounding fleece, I also basted it together with an additional layer of batting so that area would have the same loft as the fleece around it. 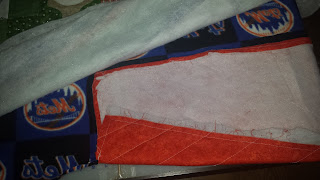 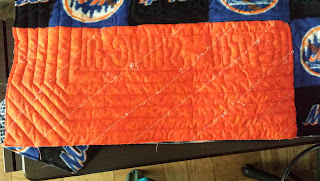 I originally planned to stitch the center of the quilt with white thread but felt it contrasted too much with the darker green and blue fabrics.  An odd choice of color turned out to be the best thing for overall "subtle contrast" for quilting all of the center -- a light green from Aurifil (#5014) which has been sitting on my sewing table since I used it for the bobbin thread on a Quilt-As-You-Go calendar quilt project I started a long time ago.  I also used this thread to SID around the borders.  For the top stitching in the last blue border and for the bobbin thread for the fleece backing I used Christa Watson's favorite "near black", the dark grey Aurifil #4241 which I finally got a few spools of.  For the label area, I used another unexpected choice, Connecting Threads "Cherry" (red) in the bobbin. 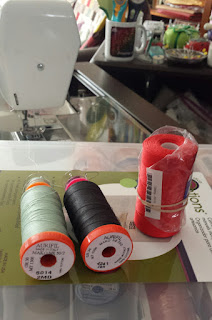 I stitched a basting line in the ditch around the label area so I would know where to make the bobbin changes for it when I was stitching in the front . 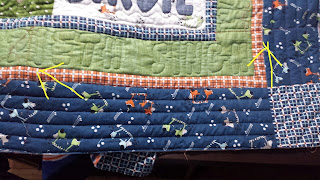 Final debate was the binding but with little fabric left there wasn't much of a debate.  It was either the blue plaid or the orange plaid.  The orange was a little too bold for the front although I liked the way it looked with the fleece in the back.  If I wasn't so anxious (and time crunched!) to get this done, I might have opted to do a two color binding.  So I went with the blue although not on the bias as I normally like to do with plaids -- there's already enough pattern going on in this quilt and the print set on the diagonal seemed a bit too much at the end. 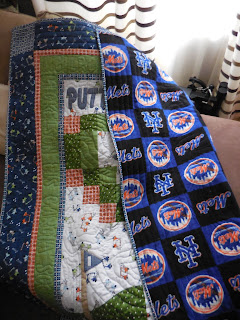 So I'm glad this one is finally finished and I can move on to other things!
Posted by Vivian at 7:09 PM No comments:

Although I had hoped to have had the quilting all done by now, I lost out on two days of stitching during the week.  However, I'm still moving right along:  as of last night, I've finished quilting the golfers names into the top and bottom borders (in the pic below) and have four of the five names for the left side border done. We've got some maintenance work to do today and a gardening shift tomorrow afternoon so I'm probably looking at a mid week finish on this.  Just in time too, we have plans to visit my friends next weekend so thankfully, I'll have both gifts ready to bring too!
Posted by Vivian at 9:24 AM 1 comment:

Last week was a good week since I finally sat down at the machine and started quilting my friend's husband's quilt.... 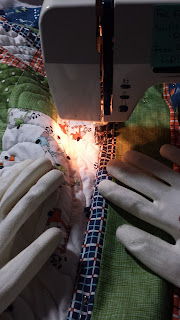 I was able to finish quilting the center (backgrounds and outlining around all the appliques).  This week I'll be stitching-in-the-ditch around all the borders﻿ and then work on the detail stitching in the larger borders.  I might actually get this wrapped up by week's end (she said, fingers crossed)!
Posted by Vivian at 3:29 PM 1 comment: