Getting Back Up To Speed - Part 2

Continuing from the last post with what I worked on in April:  I FINALLY quilted and bound my friend's mug rug that I started back in February.  It finished at approximately 6" x 15". 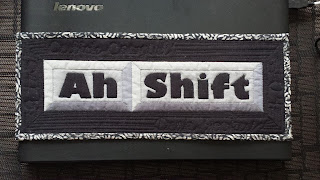 This is my mini version of the "Ah + Shift" variation of Susan Cleveland's "Ctrl+Alt+Del" quilt that's in her book "Marvelous Miters". 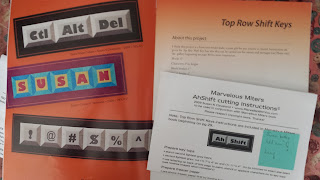 I had bought a kit which used Cherrywood fabrics a few years ago with the intention of making something to hang in our computer area (and hopefully having some leftovers to add to the stash!).  I still may do that but when I decided that I wanted to do another mug rug for my friend's work cubicle (you can see the first one I made her here), I figured a mini quilt made from the kit wouldn't require too much fabric or at least it wouldn't be hard to replace what I used when I wanted to make a bigger one.

I don't feel that the 3-D effect came out well when making it on this smaller scale.  It really relies on the direction of the light and how it hits the fabrics as to whether the keys "pop" like they should.  Also the fabrics look more washed out here than they do in person since I was trying to get a shot where the quilting shows up.  No matter, she likes when I make her things so I think she'll appreciate the thought and get a kick out of the sentiment.

It took me a long time to settle on which of the ideas I had for quilting it that I would use.  In the end,  I decided to quilt the words "Cubicle Cowgirl", "404" (for the computer error code that comes up when an online file can't be found), "Desk Jockey" and "9 to 5" and did straight-line matchstick filler around them.

More caveats on this one:  I really wish I had made the quilting more visible.  It wasn't until after I finished the quilting that I remembered reading that Christa Watson likes to use  Aurifil #4241 (a very dark gray) when quilting on black because it gives a nice bit of contrast on that color fabric.  I must get a spool of that so it will be in my thread arsenal in the future.  I also totally forgot about the dark gray Sulky 12 wt cone I had bought when they had a "discontinued colors" sale back in January.   I purchased it and some other thread colors to execute the special quilting I have planned for my Gee's Bend project (which I'm still debating about whether to do by hand or machine) but could have probably used it for this too. 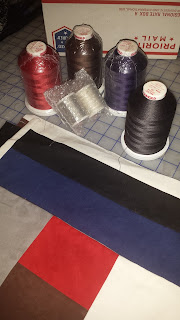 To round out the mug rug gift I'll be adding -- what else -- a mug!  I had picked it up awhile back  (long before I thought of doing this rug) knowing that I could use it one day as part of a gift for her because she loves cats.  I also plan to bake up some cookies to send with the mug and rug so got a pack of coordinating treat gift bags from the dollar store. 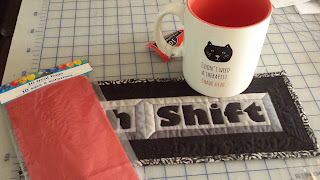 So at least her gift is done - oh, except for the label.  I'm still trying to figure that out.  I used a specially themed backing fabric for the rug: 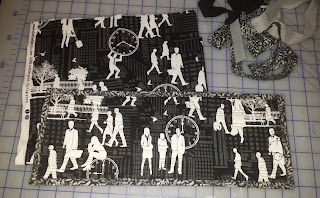 This is from the "Rush Hour" fabric line by Studio E Fabrics that I purchased from City Quilter just before they closed their retail store.  It took me a long time to center the backing to get a range of the motifs included and I don't want to cover them up too much.  Once again, not until after completing the binding step did I think about doing a monogrammed quilt label on the back binding (you can see an example of that here).  Of course there is NO WAY I'm taking off the binding and re-doing it since this gift is already three months overdue!  I'll think of something while I'm working on finishing her husband's quilt.

Edited To Add:  In the end, I took a cue from the clock in the backing fabric print and using one of the circles from the Karen Kay Buckley "Bigger Perfect Circles" set and a seam allowance guide, traced and cut a circle of fabric for the label. 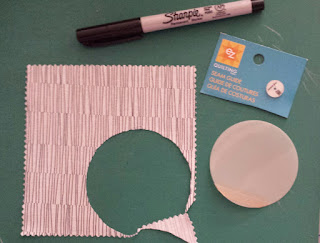 The orange Glow Line tape on the circle template lets me know where I will have to fold in the edge of the circle to line up with the quilt edge.  I gathered the edges of the fabric around the template and pressed it with starch to prep it for stitching.  After folding up the edge, I hand stitched the prepped circle to the back and wrote in the label information before packing the mug rug up for gifting. 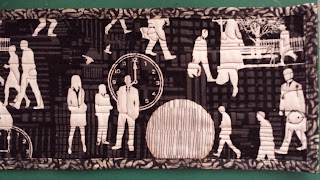 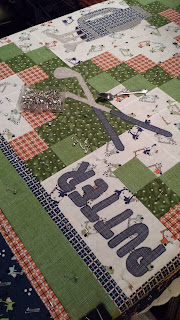 And yet, in typical Quilter's ADD fashion, I have already started on yet ANOTHER project....but that's a story for the next post.
Posted by Vivian at 11:15 AM