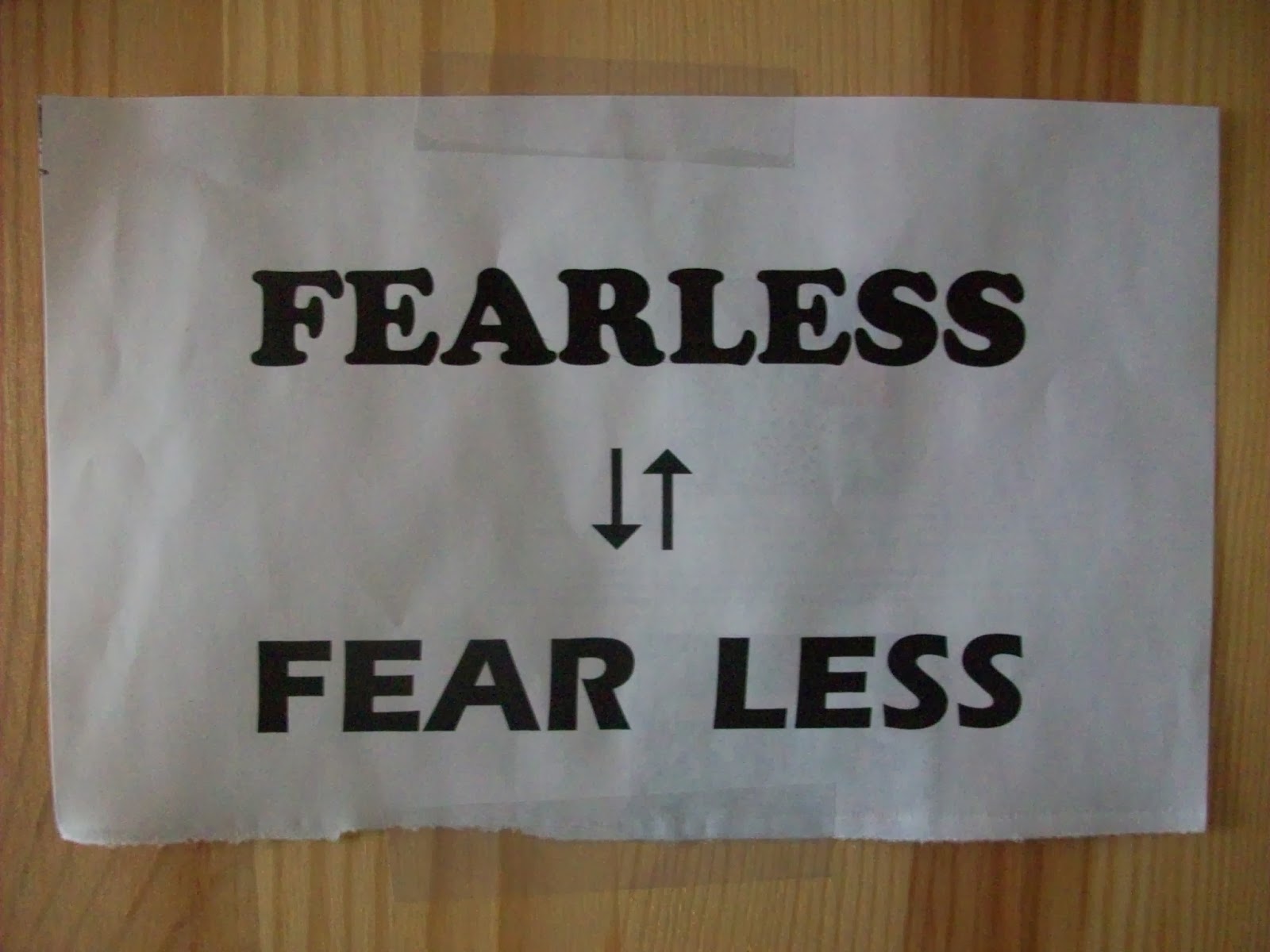 To live a creative life, we must lose our fear of being wrong.
﻿
---American Patchwork and Quilting Magazine, April 2002, page 53
I fear the venture into the unknown.
But that is part of the act of creating and the art of performing.
---Martha Graham, dancer
All that is necessary to break the spell of inertia and frustration is this:
Act as if it were impossible to fail.
---Dorothea Brande, writer
My goal for the reader of (my book) is for you to listen to that little voice that says, “I could do that,” and go with it.  No matter what your insecurities say, do it anyway and ignore the fear….What is the real secret to winning quilting awards?  Being fearless when you are scared out of your mind.
---Karen McTavish from the book “Quilting For Show”
(On-Word Bound Books; 2007)
And a reminder that is posted in my "studio" and is always at the bottom of my blog:
﻿﻿﻿(As Seen in Quiltposium magazine, Fall 2011)
Enough said!

Time to "Process" A Finish!

Here's a closer look at the baby quilt I made: 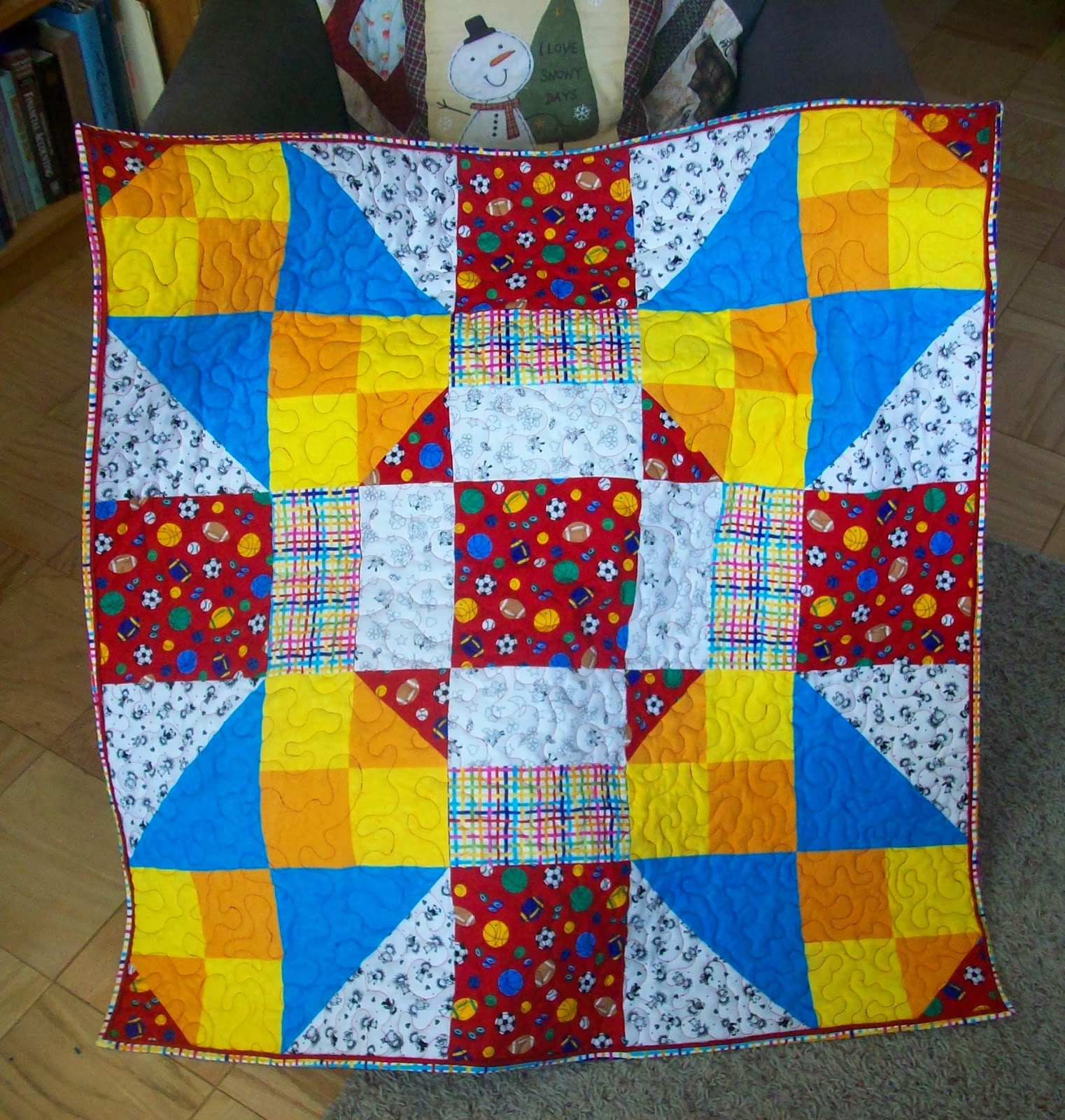 The pattern is "Go Baby!" from Quiltmaker's January/February 2013 issue. 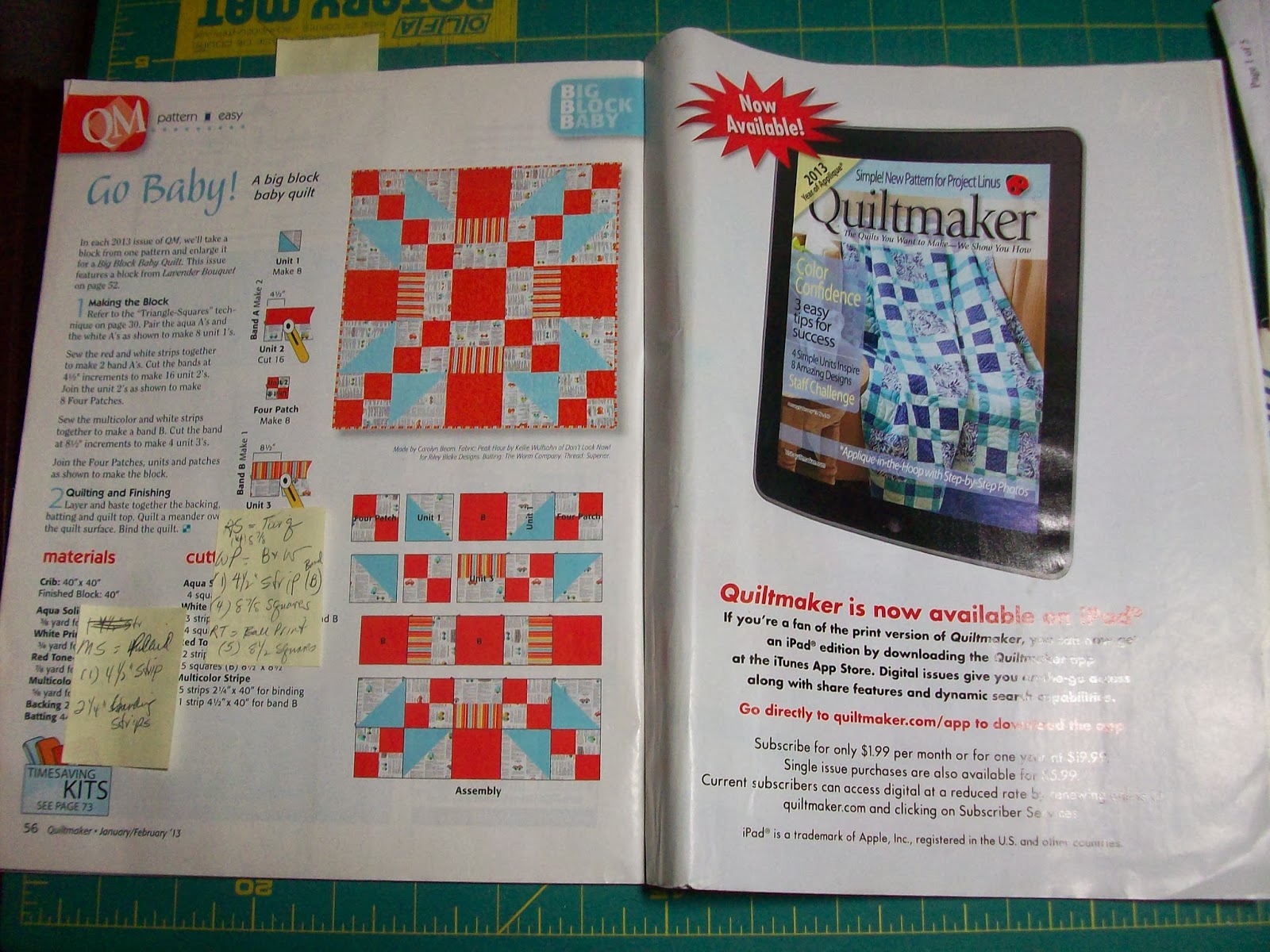 Throughout the year, Quiltmaker took a block from one of the projects in each issue, supersized it and made a baby quilt pattern from it.  Go Baby! was made from a block in the Lavender Bouquet quilt by Linda Hahn. 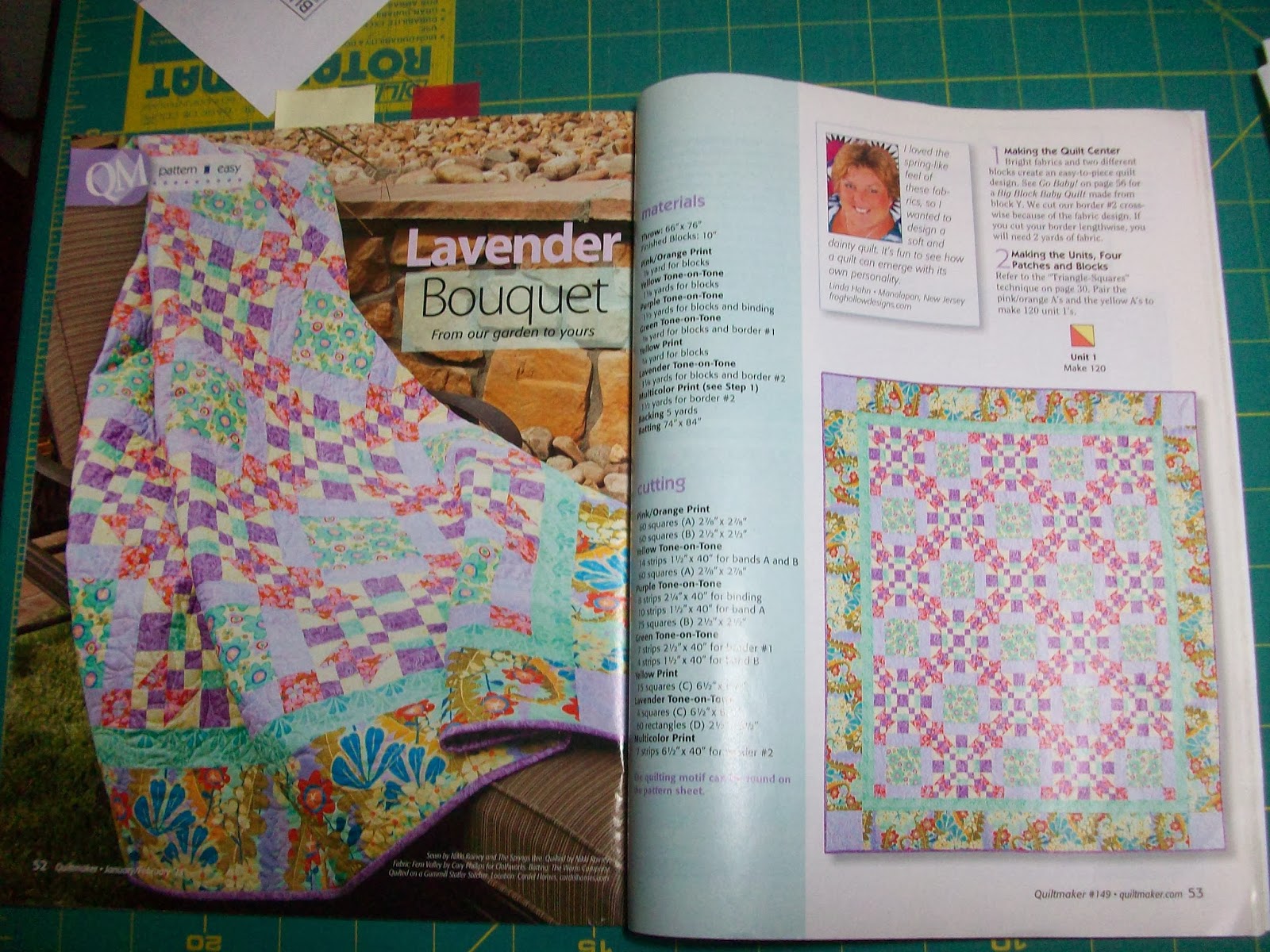 The concept is similar to what Evelyn Sloppy did in her book "Sew One and You're Done:  Making A Quilt From A Single Block".  So if you can't get the QM back issues, you can get her book from Martingale or Amazon.  Even better, if you'd like to try just one of the patterns from her book, Martingale has most of them listed for sale as individual patterns.  Just click on the "E-patterns" tab on the book listing on their site.

I made this quilt as a gift for the new grandchild of  the President of our townhouse cluster's Tenant's Association.  Her daughter used to teach at the middle school my sons attended and I had served with her on the school's Leadership Team.   I thought a baby quilt would be an quickie project and for the most part it was but every project has its zigs and zags so this took a little longer to finish than expected.

Wanting to make this from stash I played with the color placement in Quilt-Pro a bit to make use of some things I already had in house:  a 3/8 yard remnant of the balls print and some coordinating solids pulled from a fat quarter bundle purchased three years ago when we had visited my MIL in North Carolina.  Still from stash, I added the plaid and the black and white kids print and thought I was fine.  Turned out I didn't have quite enough of the first B&W print so a second one was added for the center bars. 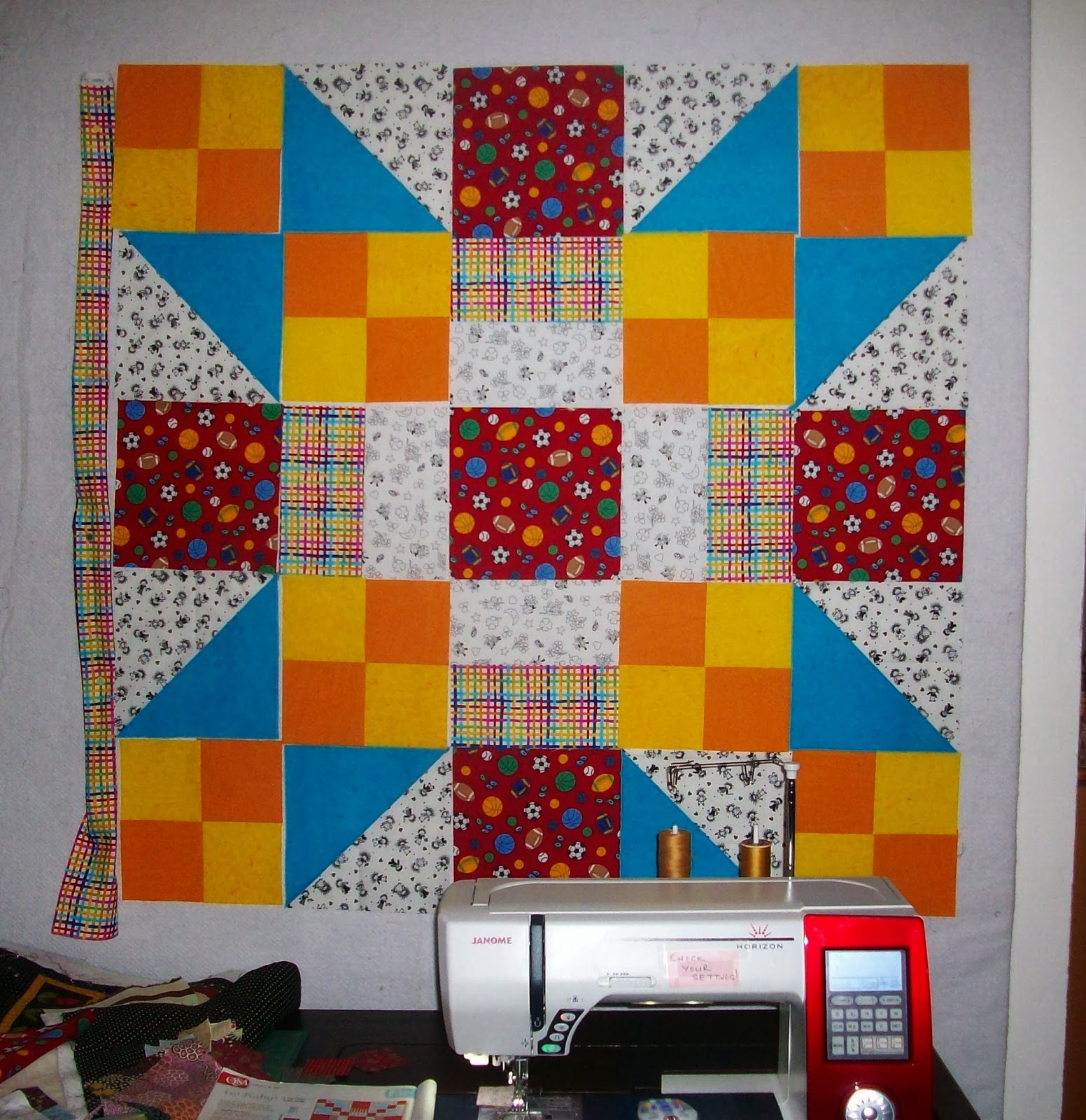 What looked good in Quilt-Pro was a little underwhelming in person and my first thought was that it needed more red.  So I considered adding a red piped binding even though I had nothing suitable in stash for that so had to buy that fabric: 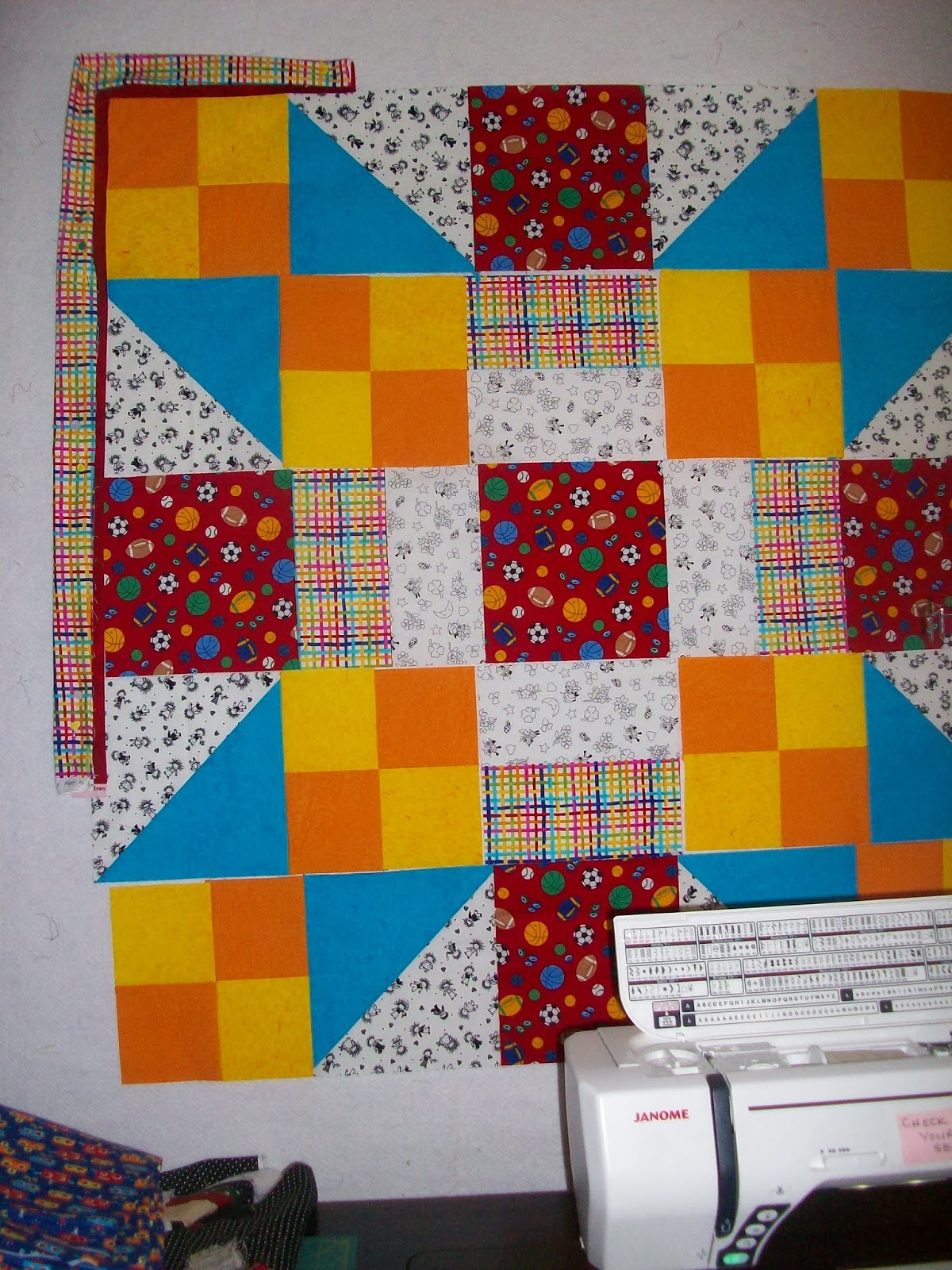 And then tried adding more of the balls print to the center: 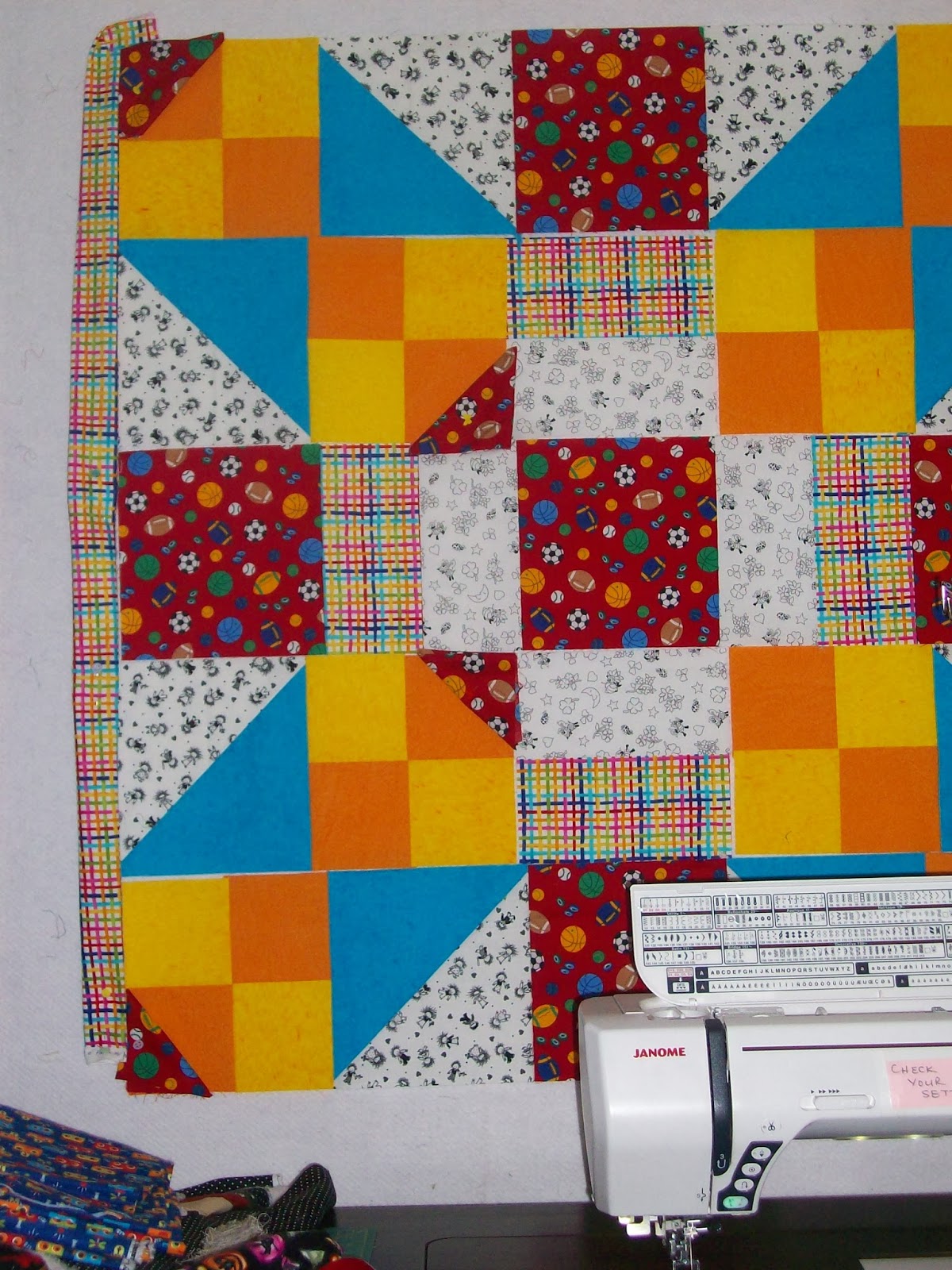 And then finally both: 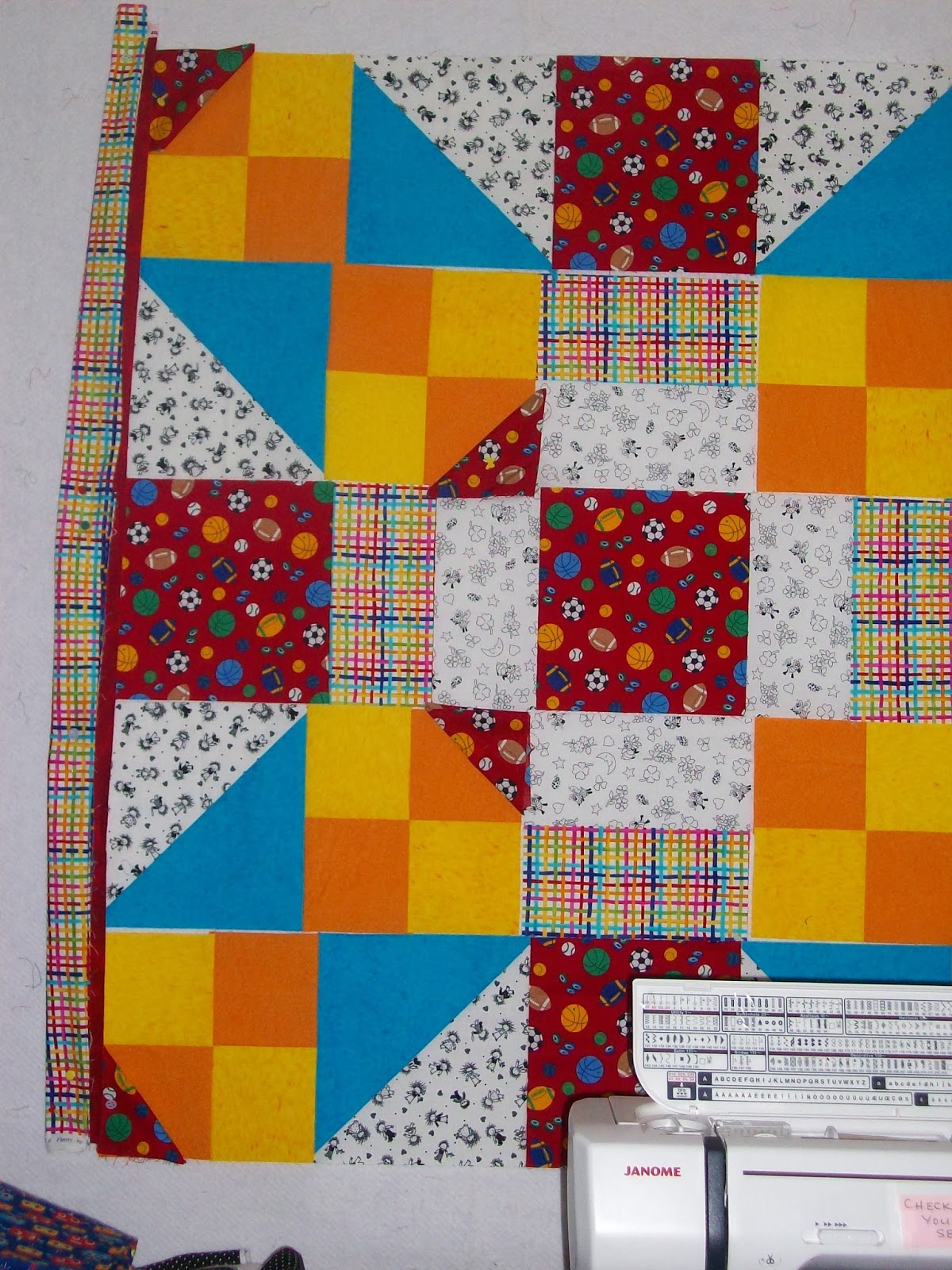 Ah, now that worked for me!  When it was pieced and ready to quilt, I knew I would simply stipple it but with what thread?  I pooled a number of colors on the top but truthfully, the only thing I liked with it was a "Red" Connecting Threads Essentials spool that I hoped wasn't going to be TOO much red!  For once I was able to do the stitching itself just fine but had a lot of problems with the thread constantly breaking.  I tried a number of things to correct it (changing feet, thread tension and needles) but eventually found that I was just moving my hands way too fast.  Once I slowed down so did the breakage issues (reduced but not completely eliminated!).  Eventually I got it all done although my one disappointment is that the stippling is not as even as I would have liked.  I started out with the intention of doing it really large but as I moved around the quilt, it got fairly close which I believe reflected the tension I was feeling about all the thread breakage.

With the quilting finished I could prepare the binding and attach it.  I learned this "piped binding" method from Debra Henning's Triangulations Bed Quilt book and first used it back in 2009 when I finished my basket quilt.  Recently, I found a great tutorial of the technique on the web done by Trisha at her TLC Stitches blog.  My only issue is that the piping fabric I got is flannel so I should have cut the binding bigger to accommodate the extra bulkiness.  However, I love that this method also allows for a completely machine applied binding which for me is standard practice anyway! 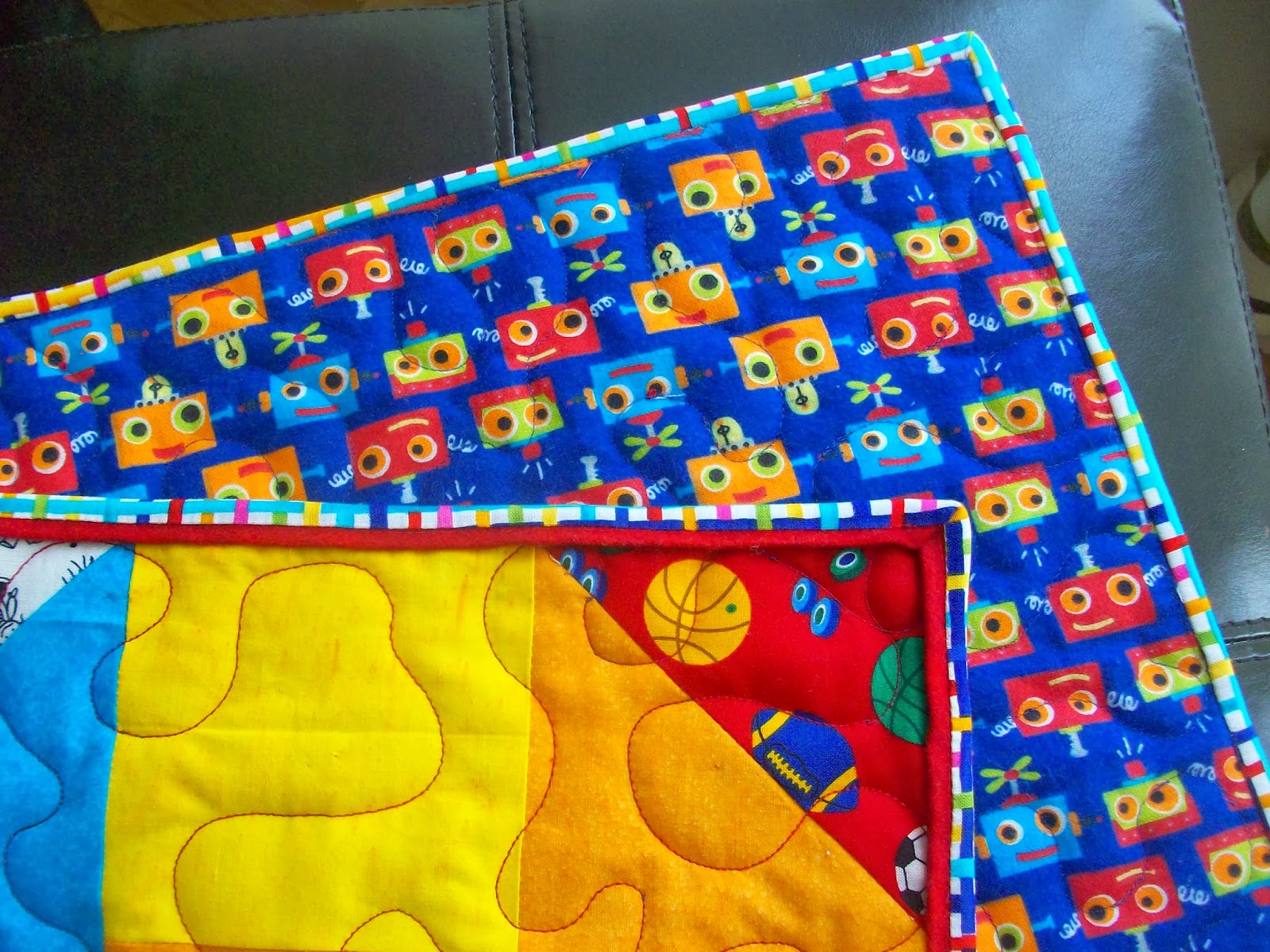 In the end I think it worked out pretty well.  I purchased the backing too and it was a fun blue flannel print which is a perfect complement to the piping fabric.   For the back, I used a blue Aurifil thread (also from stash) in the bobbin although I used "Invisible" monofilament thread in the bobbin when attaching the binding (something I also pretty much always do when doing a machine binding). 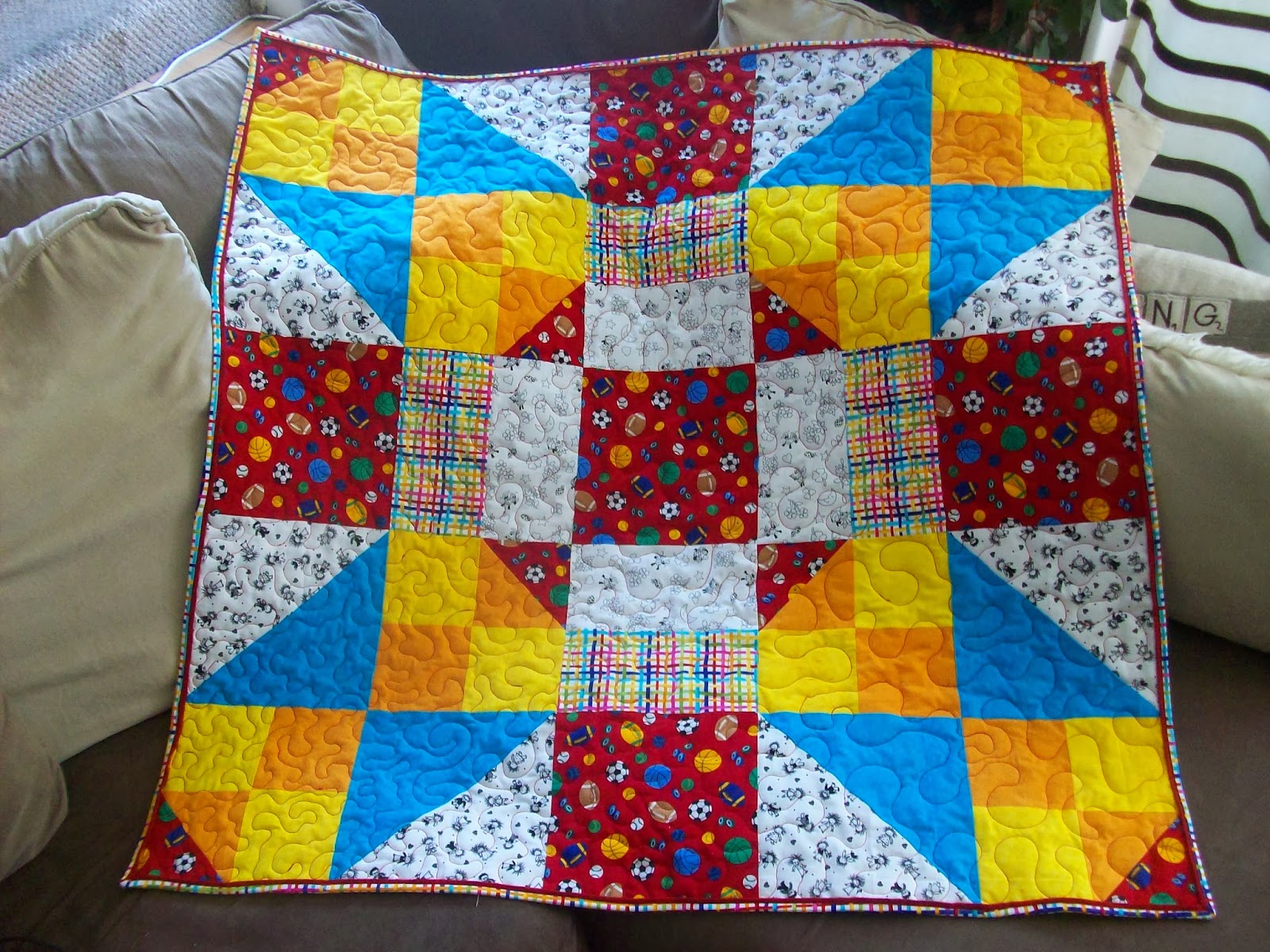 So a fun little diversion!  I recently saw another baby quilt in the latest (March/April 2014) issue of Quiltmaker that I think could use up the rest of the solids scraps.  I may also use what I have leftover of the backing and piping fabrics to make one of Mary Johnson's Strippie Quilts.  I had wanted to make a couple of baby quilts last year to donate to Victoria's Findlay Wolfe's Bumblebeans Basics initiative to benefit "The Retreat", a shelter for victims of domestic violence.   Hopefully I can get a few other projects out of the way before she puts out her next call for quilts.  It would be great to have some already made up when that happens!
Posted by Vivian at 6:15 PM No comments:

Like most, here in the city we're buried in this: 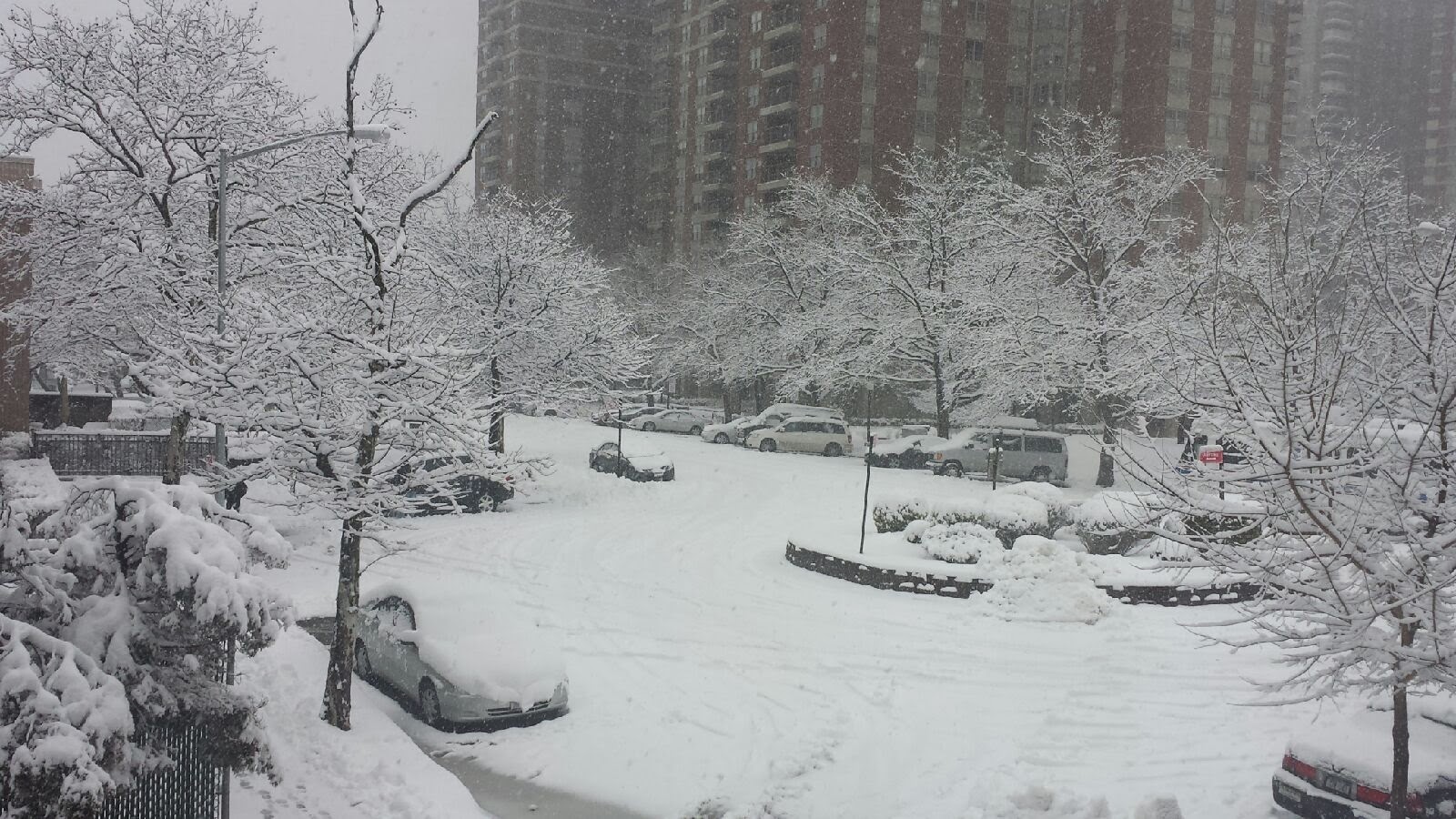 For me, it was a great day to check out the winning quilts from the recent "Road To California" quilt show here.  There are some really gorgeous works, truly the best of the best and something to aspire to.  To be especially admired is Fairy Ernest who at the age of 88 entered and won first place for "Wall - Traditional Applique" for a beautiful hand appliqued Pearl Pereira design (and those of you who are familiar with her patterns, know they are not for the faint of heart)  --- you go girl!

I was also glad to see that many of the entries had been started two, three, even seven years before (the earliest was the "Best In Show" by multiple award winning quilter Sharon Schamber which she had started in 2000).  This went perfectly with Lori's latest post at "The Inbox Jaunt" on esablishing your priorites for your UFOs.  She had also done a previous post on "what our UFO's say about us" and I took some time to add my answers to today's post and firm up my "To Do" list.

Lori's post was about establishing your "Top 3" projects.  After that it was time to play catch up on mine by: 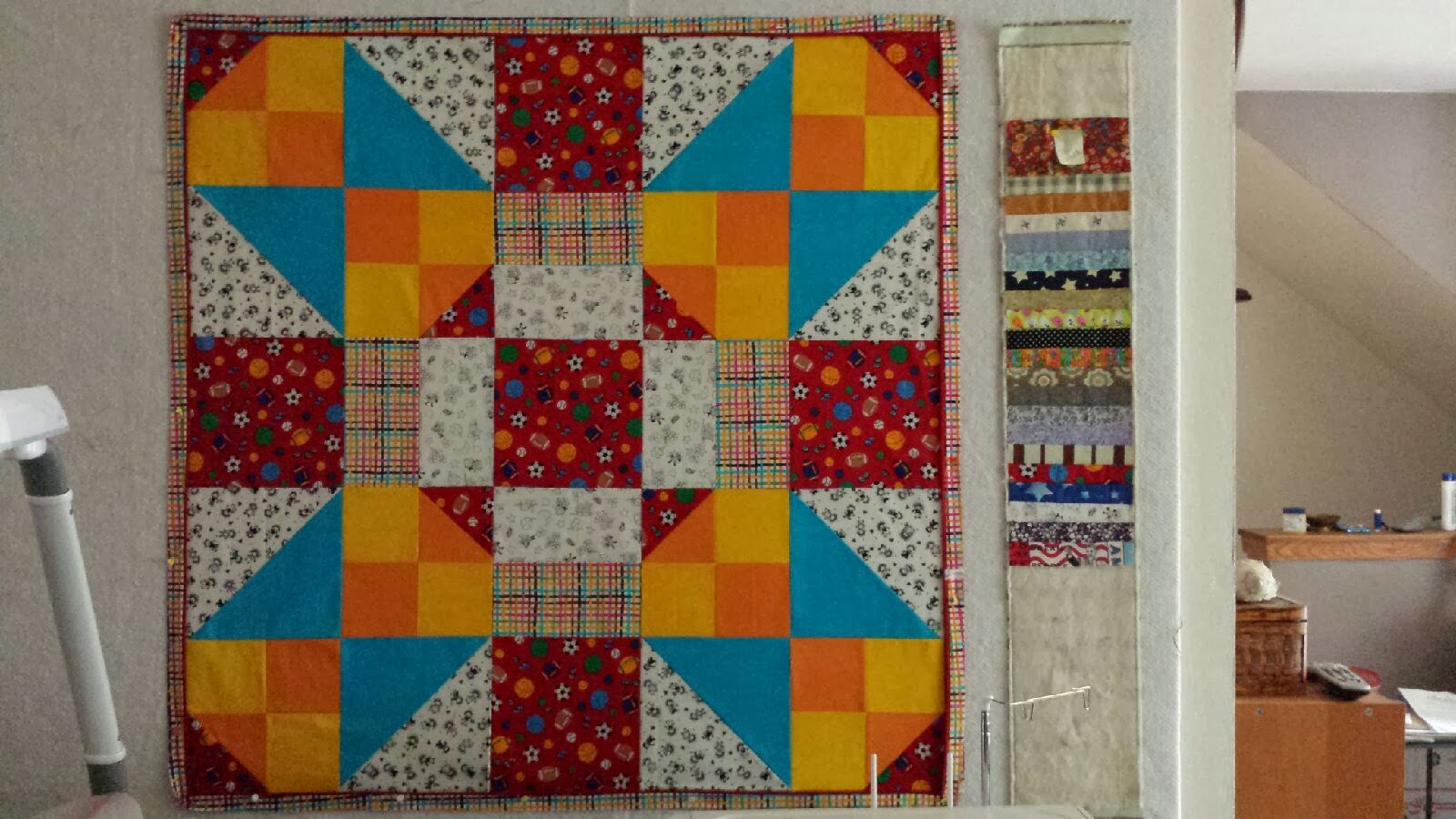 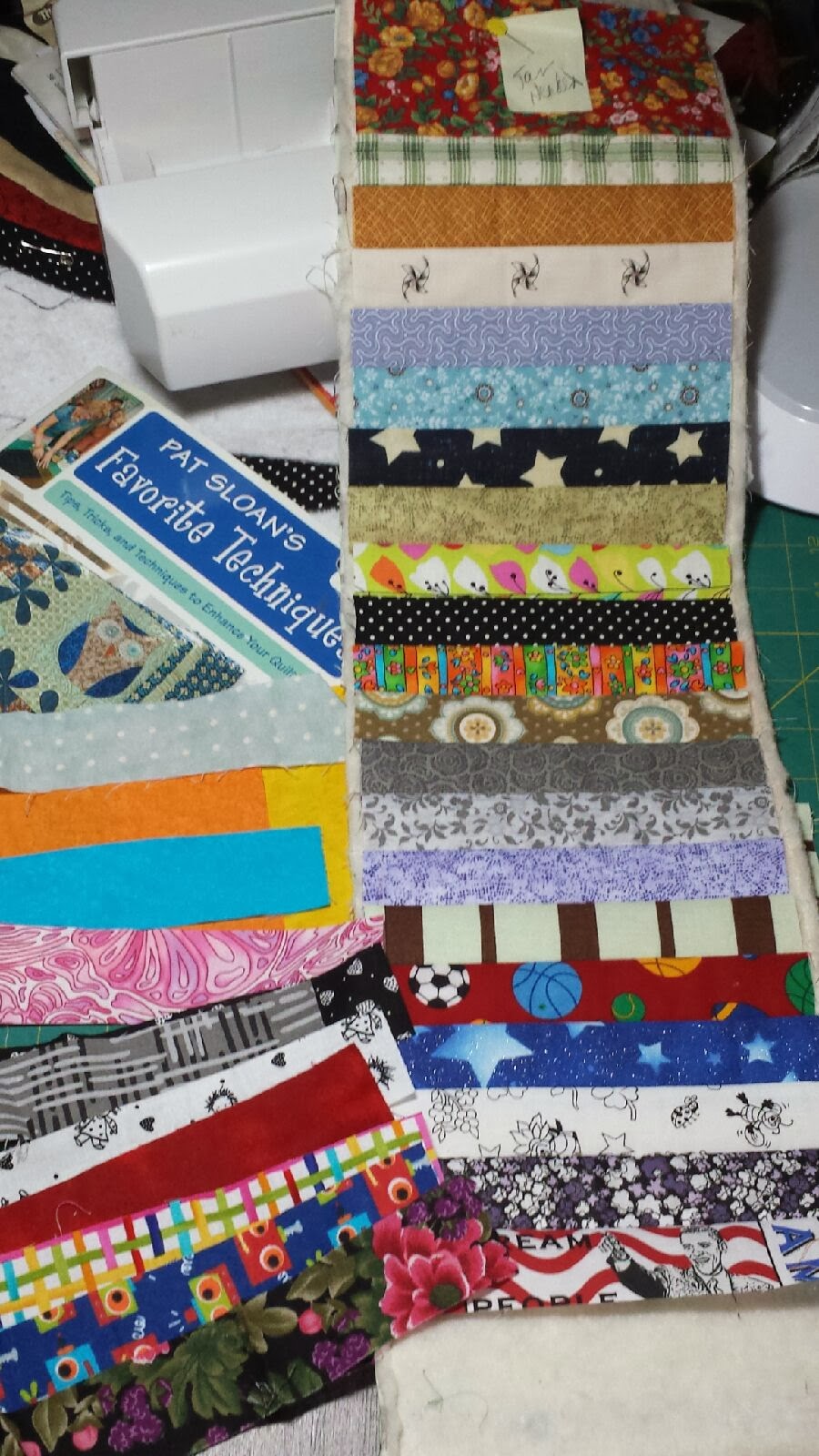 BTW, if you don't know what a Calendar Quilt is then check out some that were finished or in progress when quilters hosted a challenge back in 2009.  You can get the instructions for making them in the book "Pat Sloan's Favorite Techniques" which can be purchased here or here. 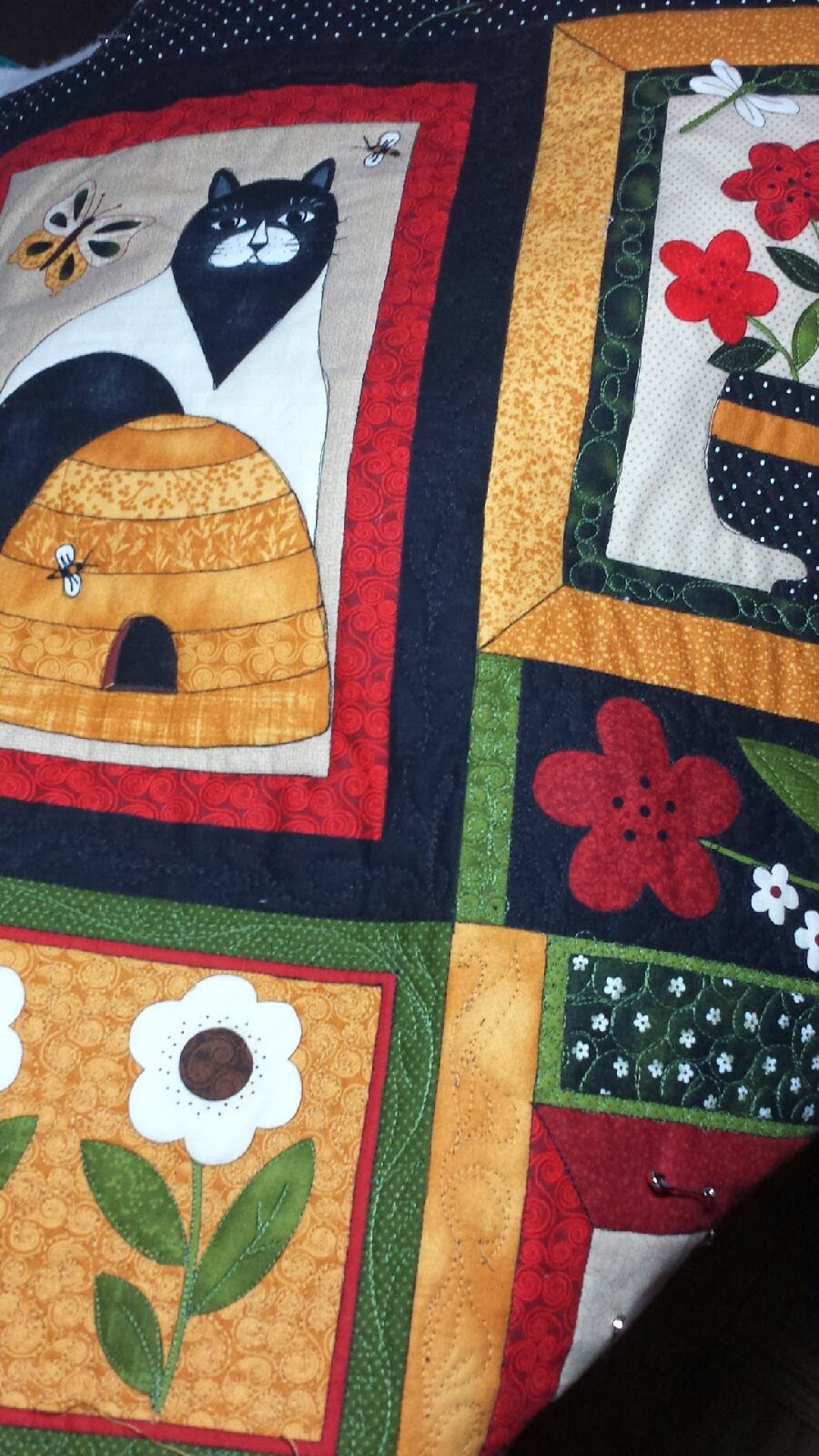 I hope to (no, will have to) do detail posts on all of these.  Hope you are in and warm, toasty and busy where ever you are!
Posted by Vivian at 5:31 PM No comments: