It's The Most Wonderful Time of the Year!

No, not Christmas --- although now that Thanksgiving is done (and I hope you had an enjoyable one), it is officially time for that too!

Right now, quilters all over the world are saying..... 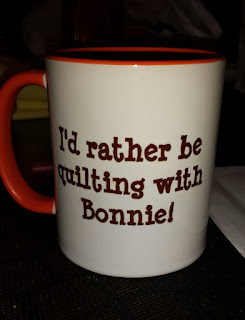 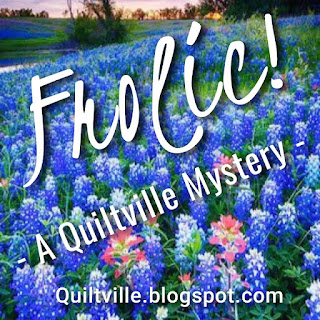 This year's mystery is called "Frolic" and Bonnie says it was inspired by the Texas Wildflowers she saw on a teaching trip earlier this year.  Bonnie issued the introduction for this year's mystery quilt back on Halloween.  That resulted in quilters around the world gathering paint chips and rifling through their stash to begin putting together their fabric pallette for the new design.

Once again, I'm not going to do this year's mystery just yet.  A small part of the reason is that that while I do like the color scheme, I'm not sure I want another quilt featuring lime green.   When I'm ready to dive into this one, I will make it a point to review the video that Bonnie and Holly Anne of String & Story did in 2018 on how to choose alternate colors for a Quiltville mystery.  That is something I've always wanted to do but didn't know where to start.  Holly Anne gives you a road map as to how to approach it.

Instead I will be content to do what I did last year:  as the mystery unfolds, I will download the parts of the current mystery while working on the MANY mystery flimsies I have in various stages of construction.  The two that are currently in production are 2008's Tobacco Road and Roll, Roll Cotton Boll which was the 2010 Mystery and can now be found in Bonnie's "String Fling" book.  I had started both this year and this week finally got my sewing machine table all cleared off and have them set up for daily fifteen minute or leader/ender sewing with the hope of getting both tops made up by the time "Frolic" comes to an end. 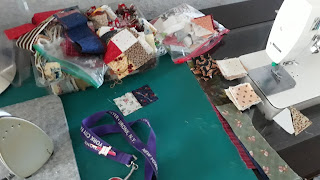 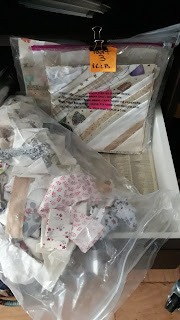 I have three mystery flimises that need quilting:  2016's En Provence, 2017's On Ringo Lake and Double Delight from 2008 which was the project that I worked on during last year's mystery season.


Those first two still need their backings made up and I've put those and the quilting of all of them on the UFO schedule for next year.

Once the mystery is over, Bonnie will offer the pattern for sale in her Quiltville online store.  So if you are even a little bit interested in doing the mystery (either now or later), at the very least, download and save the "clues" now while the mystery is underway.  And don't forget:  you can also purchase Quiltville Mystery Swag over at Zazzle. 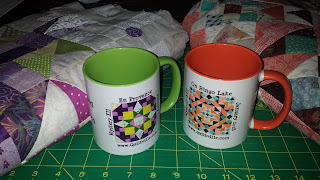 I purchased the mugs above when I had completed the flimises for those projects and I have pins for all but Roll, Roll Cotton Boll. I expect I'll be picking that one up before the current mystery ends!  The proceeds from the Quiltville Zazzle sales go to purchase supplies for charity quilt projects.  A perfect way to "give back" during the holiday giving season!

I've scheduled the release of each part in my phone calendar so that I am sure to pick them up as they are released.  I've also scheduled a reminder to check out the links ups on the Mondays following each part release.  Part of the fun and thrill of participating in Bonnie's mysteries (especially when you are doing it vicariously) is to see everyone's progress:  are there parts they have a tip for piecing more easily?  What inventive color choices have they used?  Are they starting to guess how the piced units will be laid out?  Do some of those layout ideas sound like a good plan either for the units already being made (Bonnie DOES NOT REQUIRE that you make your finished mystery quilt EXACTLY like hers!) or do they give you ideas for a completely different project to make once the mystery is over?  The great quilting minds that come together during an event like this can offer up wonderful new ideas and information to expand your creativity beyond the current mystery project.