Continuing the Quiltville Adventures: Double Delight Is a Flimsie!

Well, I may not have  "Good Fortune" but it's a "Double Delight" to bring this to a top! 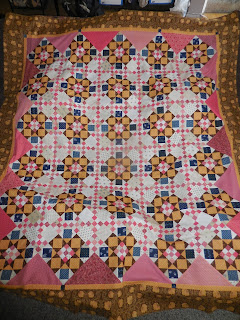 I managed to stay relatively on task finishing up "Double Delight", an "oldie but a goodie" Bonnie Hunter mystery.  While I didn't get the top completed by the end of January as planned, this is close enough!  I have to admit, I really liked this one as I was piecing it and was actually diasppointed on the days I couldn't work on it.  Had it not been for the recent deadline project, this might have gotten finished even earlier.  I also have the backing ready to go for this as well! 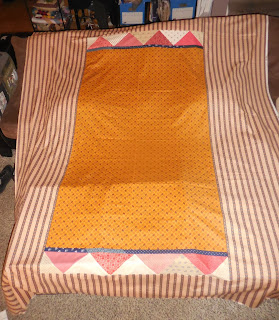 I had ordered the fabric in the center from Quilt In A Day with plans originally to use it as the cheddar in the top along with the William Morris floral print for the outer borders.   However when they arrived, I quickly realized that the two were just not going to work well together.  The Morris print had been an early inspiration in embarking on this project so it was important to me to have everything else I bought work with it.  I also liked the separation of the narrow cheddar border between  the double pink setting triangles and the outer border so also didn't want to change that aspect of Bonnie's design.  I eventually found another smaller scale cheddar to use in the blocks and inner border. 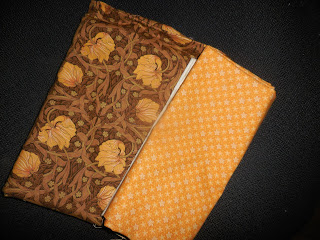 Then I realized that the orginal cheddar fabric didn't have to go to waste and could be used as the center piece for a medallion style backing so had to find something to go with it.   Originally I was going to get a nice indigo print I saw and create a simple two color, two fabric backing.  But you know how it is -- when you go to buy a significant amount of yardage for a backing (I had estimated I needed another five yards), you want to take advantage of the best deal you can find.  When I went to order the indigo fabric, I saw another nicely coordinating one at an even cheaper price point.  I was going to have to take all that was available and even then might need to go through my project leftovers to completely fill out the back.  For the additional savings, I was perfectly okay with doing that.  So I got the stripe you see and what was cool is that it turned out to be by the same manufacturer as the cheddar print (and a company I've never heard of before). 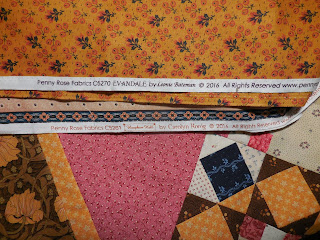 After I placed the order, I thought I almost wasn't going to get the striped fabric!  I happened to place my order while QIAD was also hosting a "Road To California" sale and after checking out, a message popped up on the screen that said "it appears that we don't have what you want".  Uh oh, maybe someone got to it before me?  However, I got a call from them the next day -- it seemed that they had so many orders, their system crashed so it recorded the payment but not what items I had ordered.  The operator updated that information into the system and my fabric arrived a few days later.

In making the back I also wanted to try to piece in an area for a label.  I had a bunch of extra double pink setting triangles laying around and figured that adding a pieced panel between the center panel and the striped fabric would also help solve that problem.  So I pieced in two muslin triangles along with triangles cut from what was left of the neutrals I had used: 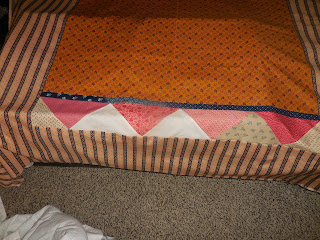 After this gets quilted, I can just write in the label information on the muslin.  As I noted when I did the Quilt Alliance Label Pledge a few years back, piecing a label area into your backing is one of the easiest ways to make sure you have a way to label your quilt once it's completed -- no additional sewing needed!  It also turns out I didn't need as much of the stripe fabric as I thought:  my original plan was to run the stripe horizontally across the back but I was running out of steam as I got down to the end and doing it vertically was a whole lot easier.  Bonus:  I still have two yards left so when this gets quilted, there may be some coordinating pillowcases, shams or a neckroll cover in its future! 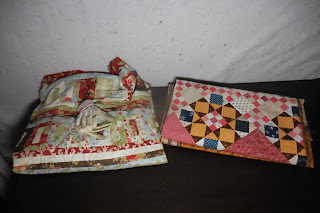 Now that it's done, I have to decide how I'm going to quilt it.  Before I work on that, I'll go back to finishing up the quilting on my Christmas Cobblestones project as well as set up a few smaller projects to work on.   A flimsie finish always feels so good!
Posted by Vivian at 4:19 PM

I love Double Delight, and yours looks lovely!