As noted at the end of my last post, I had a deadline project that HAD TO get done!  DH's cousin held a party for her daughter's first birthday on Saturday.  Of course, as a quilter that meant a baby quilt for a present.  Originally, there was going to be a "Baby's First Christmas" party back in December but the parents decided to focus on doing a big bash for her birthday instead.  That was a good call for me because although I had planned to work on this project back then, there was so many other things I also wanted to get done that I welcomed the deadline extension for this one!  Even so, I still wound up scrambling to complete it.

I think the finished quilt came out quite pretty and great for a little girl. 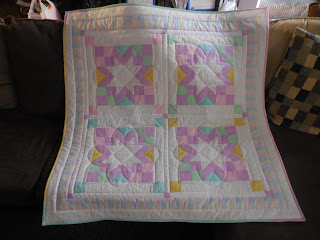 The back used up a hodge podge of flannels I had in the baby quilt stash.  The solid flannels used for the letters and the white strips came from some yardage that is actually laying around waiting to be made into night shirts. 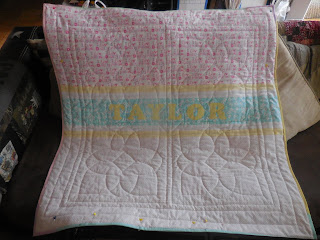 These two prints were really cute and had been remnant cuts I picked up a while back. 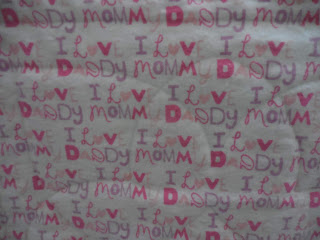 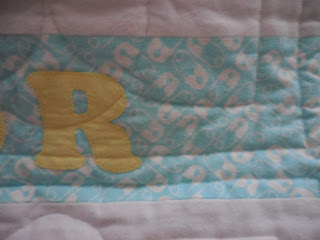 I'm also thrilled I got a chance to use my Accuquilt Go! and the  Alphabet dies to personalize it.  Here's hoping that the Quilt Gods give me an opportunity to invest in the new lowercase letter set they introduced last year. 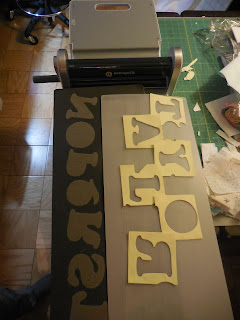 You can see here that when I cut the "R", I laid it out wrong -- the fusible should have been on top so I had to cut a second one to get it oriented right!  This means the "A" and "Y" are technically also backwards but they don't read that way so I left them as is.

Since the Featherweight  was the machine already in my sewing cabinet, I started off doing all the piecing with it and planned to also quilt this with it as well.  However, since it is only a straight-stitch machine, I had to set up my 401  on the dining room table to do the zig zag work around the applique. 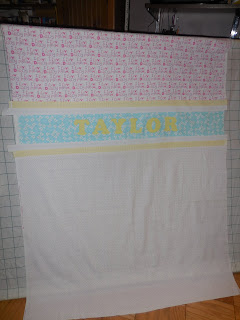 I was able to use up the rest of the jelly roll strips leftover from piecing the blocks to piece together a multi-colored binding. 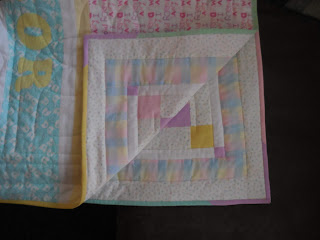 This project did a good bit to clear some things from the small stash of baby/kid quilt fabrics I have. 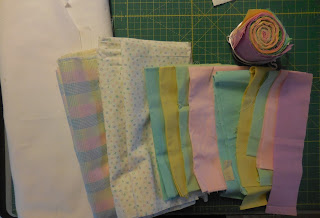 Well most of it:  the pastel letters fabric used in the center stars and sashing and the pastel plaid in the second border were actually used in one of the first baby quilts I made a long time ago and I still have a good bit of it left!  I had also sent my MIL two pieces of other fabrics from this stash earlier this month to help along a quilt she was making.  Maybe I can bundle together what I have left in the box that I have them stored in and plan to make a few quick projects for charity to clear it all out.  I don't foresee any other baby/kid quilts needed for family members during the upcoming year.  Should I get a call for that, well it would just mean I'd have an excuse to go shopping!

As always there are things I would change if I had more time:  The pattern I used was "Estelle", designed by one of my favorite designers (and expert domestic machine quilter) Wendy Sheppard of Ivory Spring for Easy Quilts magazine Summer 2016 (Note:  If you're interested in that issue, a better deal may be to get the 2016 Easy Quilts compilation CD which is on sale right now!) . 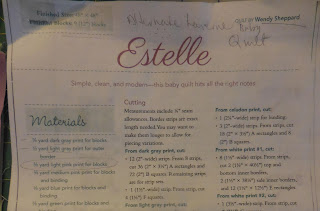 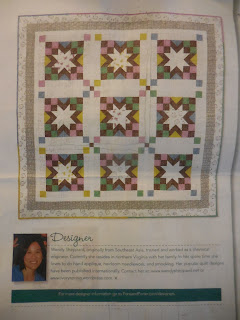 I have a file folder of potential baby and kid quilt patterns and had picked this one because it was the one that worked best with the jelly roll and fat quarter bundle of pastel solids that I had in the baby quilt stash.  The pattern had used a dark grey fabric around the sawtooth stars and I had planned to substitute dark lavender strips from the jelly roll for that.  My limited collection of fabric also meant making the quilt in a smaller four block format.  Yet even for that, I needed just a wee bit more than the jelly roll strips alone would provide and the fat quarter bundle only had the light pastel colors in it so light lavender around the stars it would have to be!

I really liked how the walking foot design used over the blocks turned out and welcomed the chance to do some quilting with my Featherweight.  I used a doubled template design from Mary Mashuta's first book of walking foot designs, "Foolproof Machine Quilting".  I had used a design from her second book back in December when making a mug rug gift. 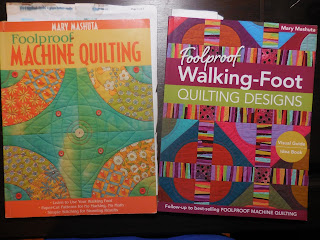 Since I used jelly roll strips rather than the 2" cut strips the pattern called for, my blocks were also bigger than patterned.  This meant I could make big templates for the stitching. 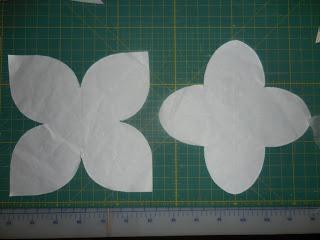 I made them out of  freezer paper which meant I could iron them onto the layered top each time I needed to use them and stitch around them to quilt the blocks. 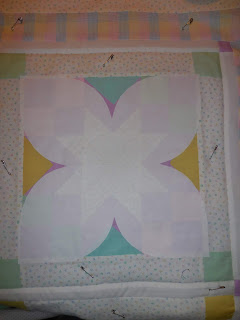 
I also added a diamond stitched into the center square of each sawtooth star (my results can best be seen in the picture of the back of the quilt at the top of this post).  I was finishing up the quilting right up until the last minute.  So while I really wanted to also stitch a decorative pattern in those outer borders, under the time pressure I couldn't decide on something continuous that could be done free hand.  So in the end, I left them as just stitched-in-the-ditch.

I also didn't get to put on a label....yet.  I realized that the only color from the front not used in the making of the back was green so I cut out a large heart, turning it with a used dryer sheet (my go to stabilizer for machine turned applique). 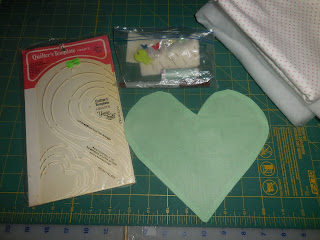 I took it with me to the baby's party hoping that I could sew it on there but she had a lot of guests (both kids and adults!) and the birthday girl conked out as the party was winding down so they didn't open gifts before we left.  As we were leaving, I let his cousin know I had to add something to the baby's gift later.  They live in our co-op complex not too far from us so I will go see them some time soon and add that important piece.

I'm glad I was able to get this one done and crossed off of the 2018 Year-end List of Leftovers!  Now I'm freed up to go back to my other projects in progress.  It's going to be brutally cold this week so I'm hoping for many opportunities to stay in and quilt!
Posted by Vivian at 10:24 AM

Your baby quilt came out great, Vivian! I didn't know that Accuquilt had alphabet dies!

Sweet quilt for the birthday girl. A very thoughtful gift.