Updates and A Quilt Contest Entry

The design boards are empty.... 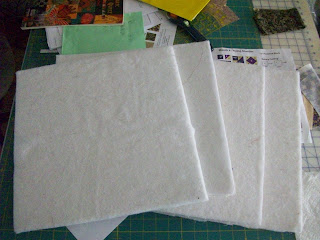 ...because the Month Four Chronicles blocks are done!  Woo Hoo! 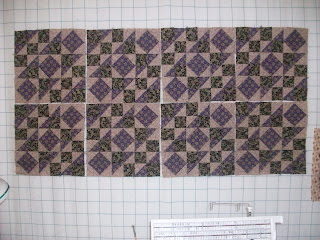 Next up is prepping the Month Five triangle sheets. 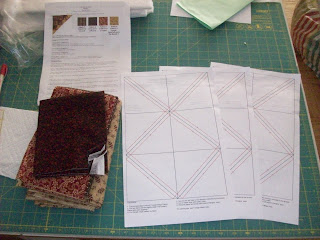 There are sixteen blocks to do but they are corner blocks (a pieced triangle like half of a triangle square).  By the time I am done with this quilt (and the more blocks I do, the more I realize that this one is going to be a real beauty!!), I will be sooo over making quilts with a lot of HSTs!

I am hoping to get the Month Five blocks done either today or definitely by the end of the weekend because I need to continue clearing the cutting table by getting back to working on the Merrimac blocks and top (talked about here).  Then when that's done it's on to starting the Blackbird Designs Halloween quilt (that I'd like to get done by the end of October, of course) and possibly getting my sons back to piecing strips for their (winter) "Denim Blue Lagoon" quilts.


Big News!  I am Entered In a Contest!

I've entered my "Flying For Cover" quilt in this week's Quilting Gallery Weekly Theme Quilt Contest.  The theme for this week is "Flying Geese Quilts".  I've wanted to enter one of their contests for a long time but never had a quilt for the current theme ready.  Here's the quilt I entered: 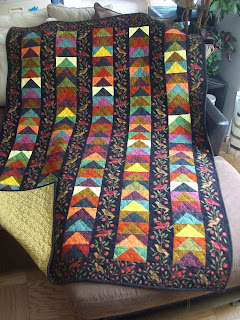 If you'd like to vote for the quilt (or any of the others posted on the site) you can do so here from today until Sunday.  If you want to know more about the quilt, click back to this post.

One thing I realized is that this is one of two finished quilts that I have not put a label on!  I had designed a rather elaborate one back when I finished the quilt but it is text and picture heavy and needs to be printed on prepared fabric sheets and then hand sewn onto the back of the quilt.  At the time I had too many other projects going to want to focus on that and thought I still had details of the label design to work out.  But I took a look at my files and realize that it's all ready to go so I better prepare some fabric with Bubble Jet Set and get 'er done!  This is why I prefer piecing the label or a blank piece of fabric into the back of the quilt.  When I do that I can write the label information in as soon as the quilting is done.  In the case of the two quilts without labels, both need to have their labels attached after the fact.  But label I must, no anonymous quilts for me!

Have a good weekend!
Posted by Vivian at 1:02 PM 2 comments:

I am so glad to FINALLY get this post out!  I just read on someone's blog that the first day of Fall is next week!!  I can't believe the time has gone so fast. Note to self:  post things as they get done, don't wait to accumulate a few before posting.  That said, on with our show.

Well, the summer was busier than expected with a lot going on and things moving along but never as much accomplished by (self-imposed) deadlines as hoped.  But in the end, little by little, it all gets done. At least that's what I keep telling myself to keep sane! So what's been going on since last we met?

The "Valor" top (talked about in my last post) got finished during the third week of July.  And hopefully it will get quilted and bound by the end of the year and will be available for display for next years Memorial Day or Fourth of July holiday. 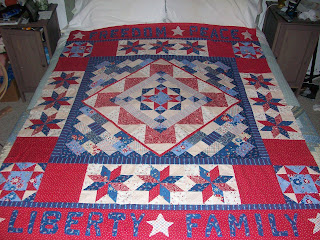 The next week was our long planned camping trip to Evangola State Park on Lake Erie and Niagara Falls.

Back from the trip, I spent the month of August focused on starting and finishing the blocks for Bonnie Hunter's "Floribunda" quilt-a-long.  This one was fun!  I was attracted to the funky retro look of the original quilt Bonnie had found at an antique store in Florida.

When I purchased the yellows for the project, I also looked for a few fat quarters that I thought channeled that retro feel or just looked good with the yellows and would add to what I could find in stash.  I didn't plan to only use florals in it but after re-reading one of her blog posts and realizing that all of the fat quarters I had purchased were in fact florals, I decided to continue with that theme and was surprised to find I had a lot of more of them in stash than I thought.  Particularly useful was a bag of fabric samples I bought years ago from an Ebay vendor which gave me a lot of vintage looking floral prints.

In September, after the kids were back in school, I was able to put the blocks together into a top, create a pieced back (the center calico was also from stash, woo hoo!) and now another finished flimsy is in the can.

After that it was all about getting back to catching up on the Civil War Chronicles BOM.  Yesterday, I finished the three blocks I had remaining to do for Month Three (top right and bottom corners). 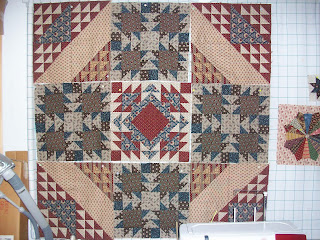 Now the challenge is to stay on schedule and bring the rest of the months I have in house (Months Four - Eight) up to date.  One of my UFO goals for the year is to complete any BOMs signed up for this year by the end of the year.  Since the last of these blocks will come in December, I want to be ready to at least complete the top or even better, layer and quilt it by year's end.

Also on the agenda is to finish the "Merrimac Dresdens" blocks (also talked about in my last post) that I also started this summer (you can see the first one to the right of the "Chronicles" blocks).  I think those will probably wait until  next week while I try to get at least one more month of "Chronicles" done this weekend.

Hope your Fall is shaping up to be a productive one!
Posted by Vivian at 11:56 AM No comments: