I hope everyone had an enjoyable Memorial Day weekend and took the time to give thanks to and honor our troops past and present.

After a long(er than anticipated) and torturous journey, the Aunt Grace "Circle of Friends" BOM top is finished!


Actually the only real torture was the fact that I constantly butted heads with my own finishing deadlines and expectations.  I actually enjoyed working on this one, especially the applique, something I see myself doing more of in the future.

One change I made to the pattern:  in the cornerstones of the pinwheel border, there are fussy cut square-in-a-square blocks that are supposed to use this fabric: 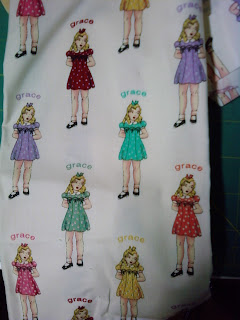 I was surprised that given the name of the project, this fabric only featured the little blond Gracies.  Years ago, I can remember there being an Aunt Grace line of prints that had a different little girl with different names on each print (and might have been called "Aunt Grace & Friends" -- does anyone else remember these fabrics?) .  Although I came late to the 30's repro party, at the time I was able to score the "Annie" fabric and it has been in my stash for years and now I finally get to use it.  I decided to take some of my fabric markers and make my "Circle of Friends" a little more diverse.  So here is how the girls are featured in my blocks: I already have the backing fabric for this one (the white with yellow flowers print at the top right in the picture of the top) and have started to think about how I want to quilt it.  But I don't know how soon I'll get to that since I really need to start on my Civil War projects and try to get something done for Myra's PHD Challenge which finishes up this month.

I've searched the web and am surprised to find very few other people doing this BOM project (or at least posting about it) even though there a large number of online stores offering the program.  And it must not have sold well because I've also found at least two sites selling the complete kit at a fairly big discount.

Had hoped I would have gotten so much more done by now but I have been really getting distracted by....well everything! Trying to get the house in order, trying to return to normal routines, volunteering, sewing, surfing the web, whew!  So what's going on right now...


I am still plugging away at the Aunt Grace project.  The good news is that the last block (and a biggie), the center block is now done!  This one had to be appliqued and I decided to brush up on the hand applique I had learned at the end of last year.  The center Dresdens were stitched together and the tops were "back basted" by machine and then stitched by hand.  The border "stubby" Dresdens were prepped using the starch method which made them easy to then stitch. I was hoping to get the the top completed by weekend's end so that I could (finally) start on all the Civil War projects I have in the pipeline. I've cut out some of the finishing elements but it looks like this one will go into another week.  I'm not going to fight it any more, that's just the way it'll have to be.

Now for some housekeeping: 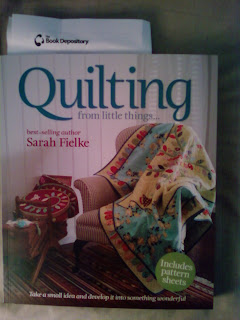 The new Sarah Fielke (formerly of Material Obsessions and now a solo author) book just arrived from the U.K. yesterday!  I saw this one on a blog tour and was intrigued by some of the quilts in it.  The book was released in Europe May 1 but won't be released in the U.S. until August.  It can be had now from this distributor with free world-wide shipping.  Note: Cutting and quilt measurements in the book are in metric AND imperial.


Sandy on a recent post on her "Quilting For The Rest of Us" blog and in her recent podcast asked everyone to update her on the quilty resolutions we made at the start of the year.  I had posted my goals there but have to admit almost mid way into the year I've not gotten far.  Here's my recap:

ATTENTION QUILTERS!!!!!
(and anyone who loves gorgeous quilts)

The Bloggers Quilt Festival started Friday!  I can't wait to go look but it looks like I, once again, won't get to contribute.  But it's way more fun to look anyway.  You can get there by clicking the link above.  So go take a look!  Go, right now and have fun!!
Posted by Vivian at 11:03 PM 1 comment:

Quilty Plans For The Merry Month of May

There's been a lot of work going on at the machine lately and I have a long list of things I want to try to get done in May.  This is my design wall as of today:


The picture is not great because it's from my cell phone (and I've got a really old phone).  I've been meaning to post this for awhile but I can't find my camera charger cord and the last time I turned it on, the camera battery was real low.

But back to the quilting.  So the big project getting the most attention right now is the one on the bottom right.  Those are my "Aunt Grace Circle of Friends BOM" blocks.  I started receiving the monthly packets back in October and had planned on starting them in January but then the move was announced.  I received the last of the packets in April and had planned to start work on them during the break of the last two weeks.  Instead, I  wound up starting them late in the second week with the hope of completing the blocks before May 1.  Didn't happen but there are only six block sets and the last month is the finishing kit (borders and cornerstone blocks).  The blocks have been pretty easy to do so I am powering through in the hopes of getting the top done by either the end of this week or next week at the latest with the layering and quilting schedule to be determined later.

To the left of those are the blocks from my "Striped Squares" project.  This is an old, old UFO that is on my PHD Challenge list.  I made a few more blocks recently and really feel I'd like to get this one done before the challenge ends in June plus I have a spot in our new home where I'd like to put the finished quilt.  Originally they were going to be straight set but up on the design wall they weren't sparking me (although I DO need to make more blocks).  Setting them on point energized it a bit for me so for now that's how they will display until I can take this further.

At the top of the wall are my Blue & White "Many Paths" blocks.  Also slow progress on this one.  The third block (on the right) is the one most recently made.  This project was also on my PHD Challenge list but I've decided at this point I'll be happy if I just get all the blocks (there are 12) made up.  This was originally planned to be hung on a quilt rack that I had in the living room of our old apartment.  But I won't be using that rack here so this project is less urgent now.  I am also thinking about getting real creative with the layout of the top but don't have the mental focus for that right now.

Speaking of the PHD Challenge, back in December (before I knew I'd be moving in a few months) I had committed to completing six projects.  Well the challenge ends in June so I know that won't happen!  I am still shooting for three and hoping that I'll finish at least one.  Once I'm finished with "Aunt Grace" I'll be adding two other projects to the wall:  I want to try to finish my "Quilt In A Day Underground Railroad/Pioneer Sampler" project and start the blocks for the "Civil War Chronicles" BOM I signed up for last fall and that began mailing in January.  In fact, the plan was for the real focus for May to be on all my CW fabric projects in honor of the war's anniversary.  The UGRR/Pioneer project is also on the PHD list so it would be great to get that done.  One of my other goals for 2011 was to finish all the BOMs I had by the end of the year and "Chronicles" would be the second of three that I now have on hand.  I also have one other CW "kit" that I'd like to make and I hope that I might do the history blocks Barbara Brackman is currently offering each week using the leftovers and scraps from all the other CW projects.

As always probably too ambitious for my own good but I've got to lay it all out to know and remind myself where I am trying to go.  Let's hope I can keep quilting daily.  If I meet even half my goals I will be ahead of the game!
Posted by Vivian at 1:59 PM 2 comments: