As of yesterday, the centers are done. 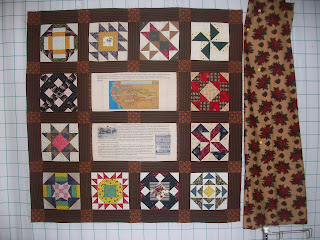 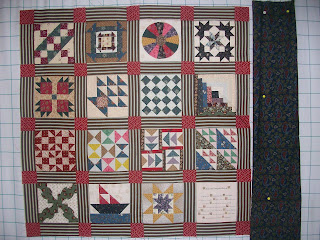 Text blocks were prepared on tea dyed muslin, treated with Bubble Jet Set and printed through my printer.  The Pioneer information came from book, newspaper and internet sources.  The UGRR text was in the pattern book. 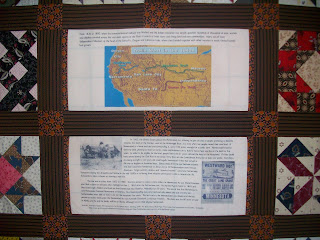 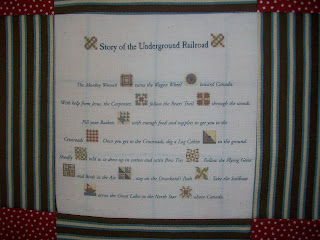 Next stop borders and layering.
Posted by Vivian at 7:11 AM 2 comments:

The Civil War Series Has Begun

I finally got the Underground Railroad & Pioneer Samplers up on the design wall to begin my long awaited series of Civil War fabric quilts.  I really need to get this particular project done because I would like to get a finish in for Myra's PHD Challenge which ends this month.

The plan has always been to put these back to back.  Up to now I thought I'd quilt them back to back but recently I realized it might be better to quilt them separately (backed with muslin) and then layer them back to back for the final binding and hanging sleeve.  Another debate is whether to hand quilt them or not -- we'll see if time permits (probably not).

If you are looking at these and wondering "how is she going to put them back to back - they don't have the same number of blocks?", know that I will be adding one text block to the UGRR set on the left explaining the symbolism of the blocks used and two two-block text boxes (or maybe one four block box) to the Pioneer set on the right explaining some of the history of the Pioneer movement.   The making of the blocks was covered in this series of posts.

But the title of this post is Civil War Series so that means there must be other things that are also going to be going on.  I have another Civil War fabric project I hope to get started using Marcus Bros. "Merrimack" fabric line from three (!) years ago (didn't realize this one's been "simmering" that long!).  There was a free pattern on their website at the time that used the fabrics to make circular pie wedge blocks but I am doing mine as dresden plates with both pointed and rounded blades.  Fortunately, this has no deadline so I can work on it when time permits.

I had also signed up this year for the Civil War Chronicles BOM that started in January so I am hoping to play catch up over the next two months and bring that one up to date.  Then finally with all the fabric leftovers from these three projects, I hope to use them to catch up with and follow along with Barbara Brackman's Civil War BOW project.

To make my immersion complete, I am also reading books and watching shows about the Civil War period.  I had downloaded Harriet Beecher Stowe's "Uncle Tom's Cabin" to my e-reader a few months ago (when I thought I would start this project) but got diverted by another book so now am going back to finish it.  This week I also downloaded "The Red Badge of Courage" and hope to get "The Boy's War" from the library.  This week is also "Civil War Week" on the History Channel and I just watched their "Lee and Grant" documentary today and have the one on "Gettysburg" also on the DVR.   Also on the e-reader are two of Jennifer Chiavarini's fiction books that take place during this period:  "The Sugar Camp Quilt" and "The Union Quilters" (having already read "The Runaway Quilt" previously).

I am thinking that when this is done, perhaps a formal visit to Grant's Tomb here in New York City might be a fitting finale.  I have been to it before but only for the exterior views.  I will be interested to see if given the anniversary of the Civil War this year, if there are also interesting exhibits on display there.
Posted by Vivian at 9:23 PM 1 comment: