It was a productive week.  As usual, not as much done as one would like but enough to feel real good about what did get done.
Last Week's Goals:
So the doll quilts are finished and were mailed off to my Aunt Monday morning.  I got a Christmas card/letter from her that afternoon saying she hadn't heard from me in a while.  So now I am really looking forward to her getting the surprise package.  It was sent Priority Mail so should reach her before the end of the week.

I finished the quilting and binding on the Tree Skirt on Sunday and decorated the tree on Monday.  I was surprised that the skirt instructions did not include ties or a way to close the opening.  But after laying it around the base of the tree I found out why -- the open ends overlap to surround the base so it doesn't need closures!  Cool! 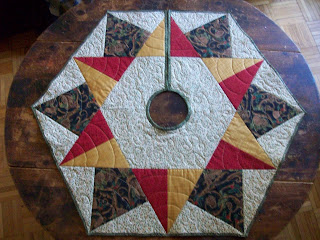 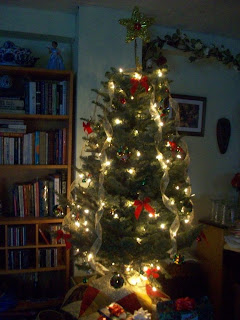 I layered the Schnibble quilt yesterday and had hoped to also get the Crumb block top done too so that I could just quilt the next three quilts one right after the other.  But that required attaching the borders of the Crumb top.  And part of the borders meant attaching the beaded barrel trim that is serving as the inner border.  Sewing the trim on was a lot more difficult than I expected.  I basted it to the top first which (note to self and any others planning on using decorative trims on your quilt tops) would have been much easier if I had planned for a wider outside edge seam rather than the standard 1/4".  It took a lot of finessing to get it in place yesterday so I had to wait until today to attach the outer border which again, due to the narrow seam and the thickness of the trim, took some finessing to get on.  But it is done and since it will be quilted simply (stitch in the ditch around the Crumb blocks and do some kind of decorative stitch in the sashing squares to give it a "tufted" look), I am hoping the layering will go fast tomorrow. 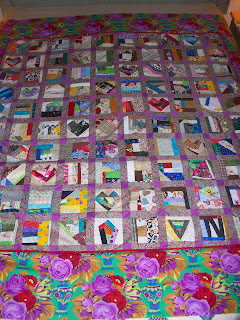 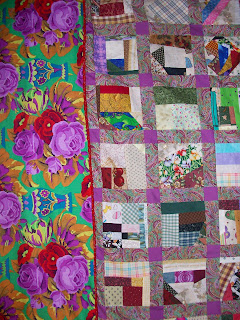 I also got a bonus project done on Friday: 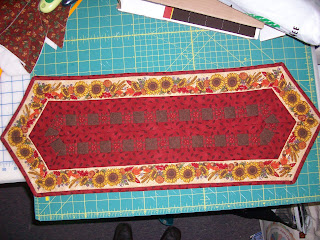 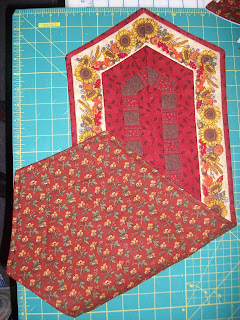 This little runner was sewn up back in 2008 when I made the quilt﻿ blogged about here. It is one of three (in different styles) made from the leftover fabric from the quilt.   It is a Karen Montgomery design that I picked up from the Timeless Treasures fabric company website when I made the quilt (and can be seen in full here but is no longer offered for free and can be purchased here).  The fusible Hobbs batting used for the Gathering Garden quilt and the tree skirt had left me with just enough batting to layer this.  This is another "pillow turn"  project that I knew would be simple to quilt because the lines of the stripe provided all the quilting guidance I needed.  Nothing fancy here, just stitching with smoke monofilament thread around each stripe border and between the little sawtooth star and brown solid square motifs in the center. I had considered also edge-stitching around the outermost edge until I realized that after stitching to the right of the red fabric of the stripe that circled the edge, it looked just like a traditional binding so with that faux finish, it was done!  I am only considering this a bonus project (not a UFO finish) because I don't plan to sew up the other two until after the New Year.
This Week's Goals:
So go check in with Bari and see what everyone else has planned as we make the final descent to the end of the year.
Posted by Vivian at 7:26 PM

Wow girl - you've been a dynamo. The Tree skirt looks amazing, now that it's quilted. Isn't that always the way! The your "snibble?", or whatever it's called encourages me to try that technique and eliminate some fabric! Good job, especially considering the time of year.

You are getting lot's done. Love the tree skirt.

Such lofty goals for this week! Good luck! I've been such a slug lately!

Your tree skirt is gorgeous.