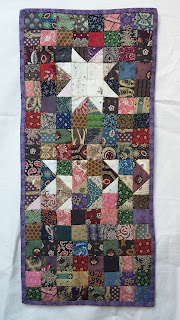 Back in October, I started collecting fabric squares for Pam Buda's last Pocket Patchwork Sew Along called "Tucker".  As noted on the reveal post, she was inspired by antique doll quilts to design this little quilt to "tuck into" small decorating places that needed a little filler.  I was attracted to the "scraps" and "mini quilt" aspect of the project and finished collecting what was needed after the reveal in November: 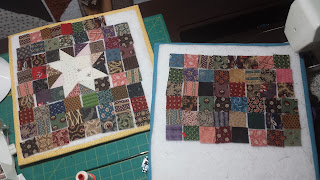 What I hadn't planned for was a rather huge obstacle:  As I started to put the first row of squares together in December shortly before Christmas, my sewing machine began having problems and it quickly became clear that I was not going to be able to machine stitch until I could bring it in for service after New Year's.  However, I had already been planning to start a big wholelcoth hand quilting project at the start of the year and so had planned to continue working on my Quilt-As-You-Go hand quilting project as a warm-up to that.  Then I realized that in a pinch, Tucker could also serve as a warm-up, as well as a chance to try something I've never done before:  Hand piecing! 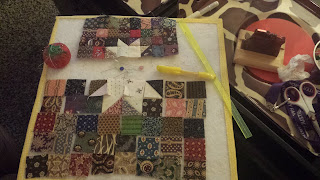 I found some good tips on both Jinny Beyer's website and the Hand Piecing With Crispy blog (see the links on her sidebar) and found that doing this all by hand wasn't as hard as I anticipated.  My Bee In My Bonnet design boards not only made great project holders but they also doubled as great lap work stations.  To stitch the seams I was using thread that was already wound on a bobbin and found I could stick a pin through it and through my pin cushion to tether them in place on the board while I lay out the pieced and unpieced rows to be worked on.

I finally sat down after the holiday to start on the hand work.  It took me four days to get the two main sections done so I could start on the center section flying geese.  I have to say looking at the back, this looks like an antique quilt! 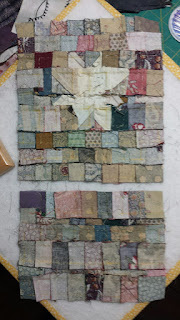 Note to self for the future:  I used the yellow Clover Chaco-liner (chalk) marker (which I love) to mark the seam allowances but see that I need to use a lighter touch on lighter fabrics because there's a bit of show through on them on the front (you'll see it better if you click on the picture to enlarge it): 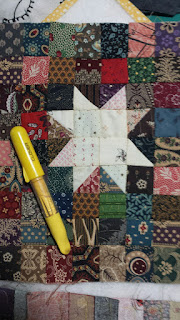 I finished the last of the geese and sewed the top together on Friday.  In the original design, Pam did a strip of FG in the center of hers.  On some of the revealed quilts, people did various layouts of the geese and I liked that option.  I decided to do mine in a "staggered" formation.  As noted in the beginning, this top is meant to be "tucked" so as designed, wasn't  meant to be quilted.  However, if you check out the reveals (posted here and here) you will find that some people did quilt them.  For me, I was glad not to have to quilt it since it would get done that much faster!  I also then decided that rather than doing a separate back and binding,  I hoped I had a piece of fabric big enough to both back the quilt and turn the edges of it to the front to also bind it.  I narrowed the choices down to two fabrics: 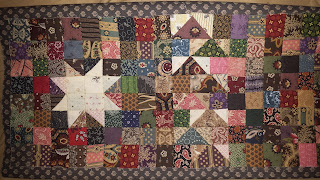 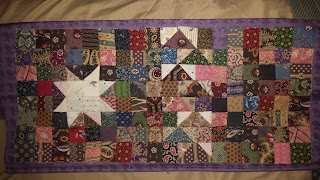 So all I had to do now was make the final backing/binding decision and would be ready to finish this...or so I thought.   I kept looking at the top and couldn't shake the feeling that some of the"sky" pieces of my geese did not have enough contrast to make the geese stand out leaving the staggered layout looking too "muddy".  Mind you,  having already sewn the whole top together, I was REALLY reluctant to take it apart.  I thought I could live with it (mainly because I really wanted to get it finished) but I finally "bit the bullet" and took it apart yesterday.  I made a two new geese (although only used one of them), played with the arrangement, rearranged some of the original ones and ended up with this: 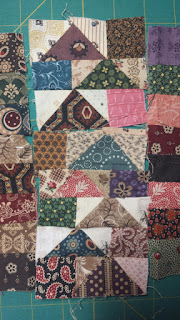 A little better (although I also still lost a few geese points) and enough to move me on to the finish.  I sewed everything back together again, made the decision to go with the purple fabric and cut the backing accordingly.  As a Gadget Fanatic, it also meant that I got to use a tool I've used before:  The Quick Easy Mitered Binding Tool. 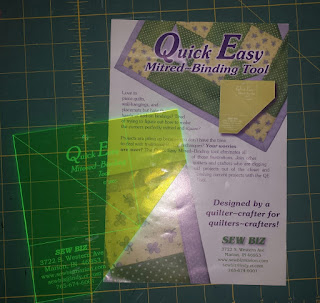 I had previously used it to do the same technique on a Schnibbles quilt (seen here).  I prepped the edges and marked the corners per the tool instructions, stitched the mitered corners, turned the edges to the front and hand stitched it down for the "binding".  I made a simple label out of a square of leftover Aged Muslin fabric and stitched that to the back to finish this off. 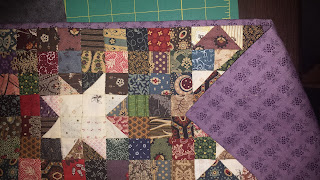 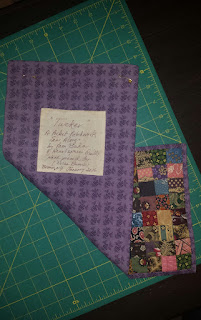 I always say that for me it helps to have a "need" ﻿to help motivate me to keep a project on track.  When I had set up my Christmas decorating, I realized that when this little quilt was finished, I too would have a space to "tuck it":


Before (during the holidays)﻿ 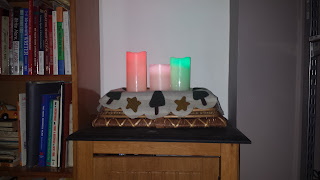 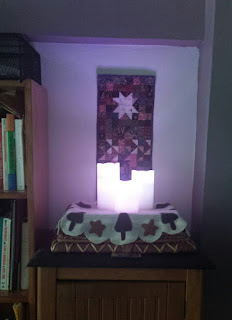 Shameless plug:  I love these battery operated candles from Leisure Arts!  They feel like real wax, come with a remote control and can be set to many different colors and to "flicker".  I had hopes for this to be the last finish for 2015 but am just as pleased for it to be the first finish for 2016!  I hope this bodes well for all the other hand work projects I have planned for the year!

Linking this up to Kathy's Slow Sunday Stitching for this week.  You can check out other hand work projects by clicking on the link above.  Happy Stitching!

Oh I LOVE how your Tucker came out--and the hand piecing came out so well! When I began quilting/piecing I only hand pieced (have Jinny Beyer's bk from long ago--eons lol).
I have begun using hand piecing again in my Grief Cloth--I find it very relaxing and I actually love the "soft hand" look it gives....sometimes I use running stitches and sometimes just over cast (with seams folded down and butted together).
thanks for sharing your journey on this--I love posts like that....hugs and Happy New Year Julierose P.S. the darkish colors really highlight the stars so well....really great finish