Well, there'll be no recap list this month because NOTHING FROM LAST MONTH'S LIST GOT DONE!  Despite having a shorter-than-normal list last month and checking it twice (yes, 'tis now the season!),  I didn't manage to sew anything quilt related this month.

For starters, back in mid October, I had started work on Pam Buda's "Tucker" mini quilt-along because I thought the mini project would make quick use of some of the Civil War scraps that I already had cut. 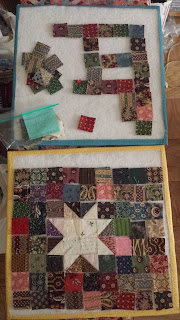 However, when I got to step three at the end of October, I felt that I didn't have enough of a variety of scraps to complete it.  I decided to wait until the reveal at the start of November to see if what I had might actually work.  What was revealed was cute (and I already know where I want to put it if I can get it done) but also confirmed that I needed more squares in some other colors.  Rather than cut more just then, I felt I had bigger fish to fry so put it aside for the moment and moved on.  Then there was the issue of the cutting table: 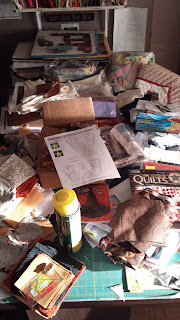 Yeah, it was a big mess!  It took me almost a week to get it cleared enough to be able to actually work on it.  By then I needed to get some cutting done for the November fabric swap at the next guild meeting.  The themes for November were "Brown" and "Holiday/Winter" fabrics. 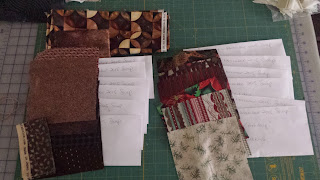 Oh, I also did some non-quilting sewing -- finally making a cover for the Styrofoam packaging that I use to store some mini pizza pans we have.  We had pulled the pans down to use for dinner one weekend and knowing that I have had the fabrics for the task for ages (which also just happened to be sitting on the messy cutting table), I figured I'd stop putting this off and just get it done. 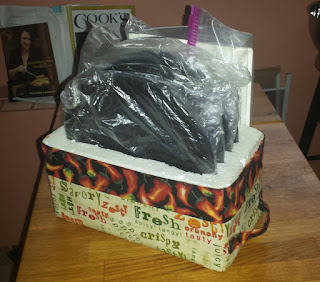 By now it was two weeks into the month and I finally pulled down the box for my long simmering DWR. This was to be my finish (well, at minimum the top) for Jo's Pre Mystery UFO Challenge.  However, when I laid out the center (finished back in 2012) with the borders (that I had cut back in April of this year) and tried to work on the applique for them,  all inspiration and enthusiasm for it left!  At that point other community and school obligations and the baking I needed to do for the upcoming Thanksgiving holiday (three pies) all began to tumble in and I admit I was only a little too glad to be diverted, hoping inspiration would hit in the interim.

And that was it for the rest of the month!  I did try to rearrange some of the "To Do" tasks to try to take advantage of the days right after Thanksgiving.  However,  Black Friday (actually, Saturday and Sunday) running around nixed that.  This forced me to take another really hard look at my planning and at that point I realized something important.

Up until recently, I usually quilted in the late afternoon/early evening, after getting the day's chores or errands done and before I had to start diner -- which I usually didn't do until my DH (who works for UPS) called to say he had finished his delivery route for the day and was headed back to his base.  I could also continue to sew while dinner was cooking and until DH got home.  However, back in September, DH transferred from package delivery to driving tractor trailers for the company which also meant a change from working days to working nights.  I adjusted my schedule too but hadn't really thought until now about how it impacted my quilting.

Now that he works nights, I try to go to bed fairly early so I can be up early when he comes in from work (anywhere from 4 - 7 AM).  Since we no longer have the evenings to spend together, we usually spend the mornings together over breakfast.  Then we use the rest of the time to tend to any joint planning, chores or errands we need to do until he has to go to bed early in the afternoon in prep for leaving at night.  After that I "start" on my own chores and errands which is much later than I used to.  When they're done, I have to start right in on making dinner so he'll be able to pack a meal to take with him to work.  By the time he leaves for work in the evening, I'm pooped (having been up since REALLY early) and usually eat dinner with DS1 and wait for DS2 to get home (he's a high school senior so usually has after-school stuff to do and doesn't get in until late) and then I'm about ready for bed.  Unfortunately, this has also just about nixed my usual quilting time.  So going forward, I now realize I've got to really think about when I would like to "schedule" my quilting and be mindful of how much time I can realistically expect to put towards my projects.

So it's time to regroup yet again!  While I fully see how tough my circumstances are going to make finishing up things for the year, I still need to push on because whatever gets done, no matter how small, is still progress!  To that end, the December goals remain pretty much the same as the November ones:

1. UFOs:  The big priority project is still  my Autumn Double Wedding Ring.  Whereas before I just wanted to bring it to at least the flimsie stage, now I'd also really like to get it layered and quilted by year's end.

2. Wool BOMs:  Xmas ornaments.  Time to finish these now and put them on the tree when we purchase it (and now have to decide when that will be).

3. To Be Quilted:  Last month I had two options but now am down to one:  the priority is High Strung +2, my Christmas quilt which is needed (well, wanted) for holiday display.

4. Hand Work:  Slight change in plans here:  although I still want to get back on track with my QAYG, I've actually got a big bucket list hand work project I plan to start in 2016.  To that end, I'd like to get myself "warmed up" using the QAYG project (and still shooting for two per week).  But I've also already penciled in the prep work that needs to be done for the 2016 project for the end of the month after Christmas.

5. WIP:  The blocks for the Halloween Quilt project remain as the leader/ender project through the end of the year and into the next.

6.  Gift Quilts:  The Baby Quilt.  Once again I must make a final decision on what I will make for this so I can start choosing fabric. I recently found a fabric that might make short work of the quilt theme so with some judicious planning maybe this can still become a Christmas gift.


7. HSY:  Now definitely want to get done  little wool wall hanging for my kitchen called "All In A Days Work" before Christmas since we might have to host this year (plans haven't been finalized as yet).  I still think this is something I could squeezed in if I plan it right.

That's it for me.  Have you ever had to rethink or plan your quilting time?  What did you decide to do?  Please share any tips you have for working in tight time frames.  Happy Holidays and Happy Quilting!!
Posted by Vivian at 4:48 PM

Labels: Get It Done, Goals