....on the "Confetti" scrap quilt project! This is as far as I got and today is the deadline for the Fabrics 'N Quilts Scrap Challenge.  They've been holding these challenges for five years now and the uploads for next year's challenge will begin right after the winners are picked for the current one.  I will be going over to see what is posted and to see the projects submitted by any of the gals from the "Scrap Bags" chat group over on the Connecting Threads site.

In my last post I said that having a deadline usually helps move along a project quicker than if I don't have one.  However, in this case, the sewing went slowly (and sometimes not at all) because as I began putting it together I kept changing my mind about the direction I wanted it to go.  Both of the original patterns I'm working from (and I posted about that here) used white or cream for the background sashing fabric.  I had planned to do that too until I saw this "Dictionary" print that I loved and thought would work well with the scraps of (darker) shaded fabrics I tend to use. 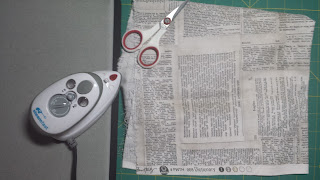 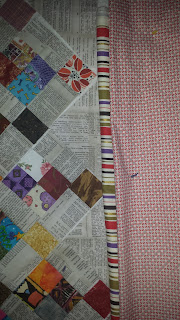 However, I still wasn't totally sure I wanted to give up the braid border although using both was totally not an option (that would be a little too much).  I also realized that I haven't used all the four-patches I have and using them with either border option has the potential to make a Very-Big-Quilt and I doubt I now want to go that way either.  At this point, I'm still considering whether or not to add a few more rows to what I already have on the wall and what the final border option will be.  So this definitely won't get finished this month but I am determined to get it done by the end of the year.

The other good news is that I did make progress on my Halloween quilt project. 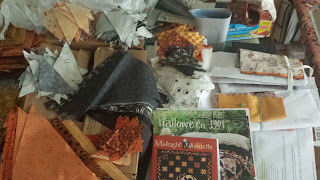 I did some cutting, both for the project and because I had the perfect fabrics for the fabric swap being conducted at this month's Empire Guild meeting.  You had the option of trading for orange or Halloween fabric and I did both (one set of fabrics I gave and envelopes I received in exchange are on the upper right in the picture above).

For this quilt project (initiated waaay back here), I've cut large black and orange triangles for the applique block centers and small black and cream/white triangles for the HSTs that go around the blocks in the "Hallowe'en 1904" side of the quilt.  I've also cut orange, a few gold and black background fabrics into squares to make sawtooth star centers, flying geese star points and alternate squares for the "Midnight Silhouette" side.  Leader/ender work has been done sewing up the HST triangle sets in between attaching the "Confetti" sashing.

The rest of the month should be focused on the Halloween quilt because -- you guessed it -- that's another deadline I had set for myself!  I'm really hoping I do better with this one than the last one!!
Posted by Vivian at 5:21 PM