On Monday Bonnie Hunter opened the last Link Up for the En Provence Mystery.  There are some really beautiful finished quilts there!  A few quilters went mini and made the units half size.  In particular, check out the ones where the quilter did a colorway different from what Bonnie had patterned.  My absolute favorite was Monica's, who blogs at Lakeview Stitching.  Her colors were inspired by flamingos and she used flamingo prints throughout the quilt and very effectively in the four patches of her outer border!   I found all the color adventurers very inspiring and want to try that for one of Bonnie's future mysteries.

I decided not to link up since, as expected, I didn't have all my parts finished.  However, there are quilters who posted where they are in the process, whether it's partial tops, a block or two or they just have all or some of the parts done like me.  Some quilters have actually counted the pieces in this design -- although the reports vary, it's definitely more than 2,500!!

I will say that as of Monday, I did have my Part 6 green/white/purple QST squares sewn up but not pressed open so after looking at all that finished goodness, it pushed me to get them pressed. 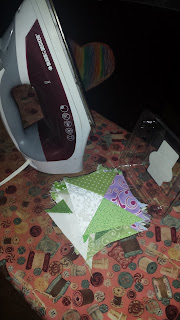 Last night, I worked on getting the Part 7 QST green/white/yellow squares sewn up as well.  I pressed them open this morning and then read the instructions and saw that I also needed sets of four (matching) yellow squares so cut those out too.  With that, just about all the parts are now in place. 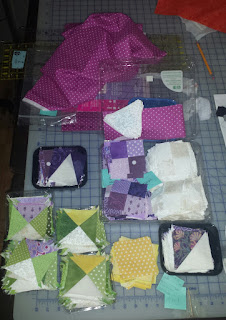 All I have left to cut are the side triangles for the Part 2 Tri-Recs (Triangle in a Square) blocks and to test out how well I like my mauve "constant" fabric (at the top in the picture above).  I have a polka dot sub-theme going on among all the colors of fabrics I used for this.  So when I found a mauve that was also a polka dot, I had to get it.  However, I also purchased another brighter (tone-on-tone) mauve with a circle motif in it that I also liked.  While I'm leaning heavily toward the polka dots,  I'm still debating which choice to ultimately go with.

I made a few of the Tri-Recs units with the polka dot fabric and put up a block and two sashing strips on the design wall: 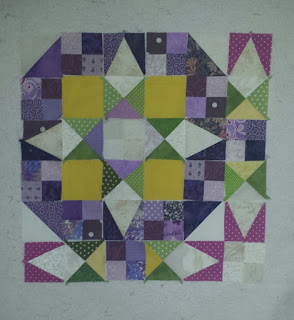 I like how balanced the Tri-Recs units look against the scrappy block units but will put up a few more blocks and sashings to be sure.  Although for now, I haven't totally ruled out the alternate: 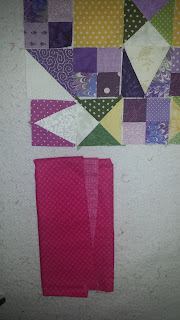 It would bring an added bit of  "pop" to the proceedings and draw the eye to the secondary stars created by the Tri-Recs units.  However, with all the scrappiness already going on in this, I'm not sure it needs another thing to draw focus.  I'll let it "simmer" on the wall while I finish up the gift quilts.  One of the benefits of having more than one project going at a time!
Posted by Vivian at 11:21 AM

Thanks so much, Vivian! I really appreciate that.

I think my vote on the Tri Recs pieces is for the polka dot that you've already used. It's more monochromatic, and the whole quilt will feel lighter as a result. If you want it zippy, then the pinker ones would be the choice. In any case, you have a lot of pretty fabrics, and it looks great so far!