(Finally) Checking In For May!

Seems like lately the only bogging I get to do is to periodically check in to let you know I'm still alive!  Unfortunately since the last check in, life has intervened in a big way which means my mind has not been on quilting the way I would have liked.

It started with a call from a very old friend (we're talking high school BFF) who was facing a serious health issue and was gathering her support crew.  Initially, tentative plans were made to travel to provide support but then it was decided to hold off until a later time when she might make better use of those of us coming from out of state.  Unfortunately for me, in the time between I was confronted with my own health issue!  So the last few weeks have been spent on assessments, researching information and determining treatment plans.  Now that all of that has been finalized (and the good news is that for now my own treatments won't get in the way of being able to travel and support my friend when needed), I'm trying to get my life at least a little bit back to normal.  For me that includes continuing work for the start of gardening season at our community garden and (for the purposes of this blog) quilting!

When I last checked in, I had just gotten ready to make good on my plans to focus on the first two of the "Bucket List" projects I wanted to complete for this year.  Once all the illness news hit, I admit that it threw me for a loop and made concentrating on those projects too hard to do.  So instead, when I could steal a few moments (or really needed them for maintaining sanity), I went back to "mindless sewing" to fill the time.  Believe it or not, for me that was tackling the top for Bonnie Hunter's "On Ringo Lake" mystery. 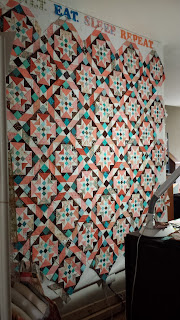 I've spent what little quilt time I've had getting all the finished blocks and sashing units up on my design wall and then periodically starting to sew the rows of blocks and sashing together.  My goal was to try to have this top finished before I had to travel.  It was good "bit by bit" mindless sewing at a time when I needed it.

Before I had learned of my own health issue, I had initially anticipated that the trip to help my friend might be for an extended stay.  So I planned to take my Featherweight machine with me and wanted to gather up some projects I could easily work on while away.  After finishing the "En Provence" top, I had already started thinking about making yet another Bonnie Hunter mystery quilt --- admittedly inspired by Maggie Fellow over at her "Making A Lather" blog and reading about her ongoing Quiltville Mystery Quilt Challenge.  The next mystery I wanted to make was "Old Tobacco Road" which was one of Bonnie's earlier ones from 2008.  I had downloaded the instructions back when she originally ran the mystery but it can be found today on her website on her "Free Patterns" page (scroll all the way down to the bottom for the early "Mystery Quilt" patterns). 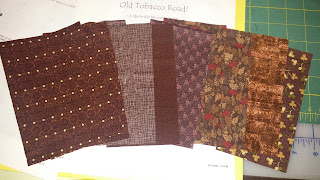 I started cutting bricks for it as I cleaned up the leftover brown fabrics used for "Ringo Lake" when the blocks for that mystery were finished.  Then I cut and added bricks and larger squares for cutting setting triangles in other dark colors from stash and even found a potential border fabric. 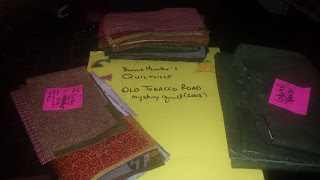 "Tobacco Road" also needs scrappy light and dark 2" (unfinished) squares and triangles to make four patch units and pinwheel blocks so I set to scrounging parts for those units as well.  I was able to go through my bin where I toss scrap triangle cuts and HSTs and put together a quart size baggie of a good selection of  triangles and HSTs.  From my Scrap Users precut bins and from stash I bundled up light and dark 2" strips that I can strip piece together and sub-cut to make square pairs for four patch units and use the Easy Angle ruler (which I will also take with me) if I need to cut more triangles for the project later. 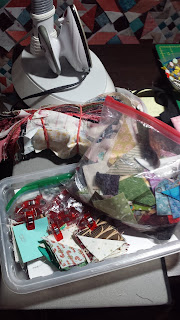 So that is now all packed up and ready to go when the time comes.

Back in December another friend of mine had asked if I could make a desk mat for her office.  I didn't have time for it back then but now since we'll be traveling together to support our mutual friend when the time comes, I decided to cut strips for that as well to take along.  She likes purple and I had a stash of those fabrics as well as bright greens and creams left over from making Bonnie's previous mystery "En Provence".   My plan was to make a mini version of the "Moscato Di Asti" quilt pattern for her mat since she likes that type of wine in real life!  So I gathered 1-1/2" strips for all the colors the design called for and set those up for traveling too. 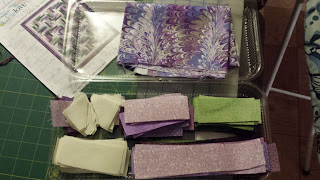 Well this sure is a vote for having multiple projects or ideas for projects going at one time! I'm glad I had these diversions around at a time when life prevented me from being able to give focus to more complicated projects like the wholecloth hand quilting or continuing work on my Double Wedding Ring.  While I'm a little disappointed to have to put those and my other "Bucket List Goals" on hold for a while, it'll be that much more satisfying to get back to them when life allows.

Well that catches me up!  Don't know how soon I'll be able to check back in again but at the very least, I'll definitely try do so again at some point in June.
Posted by Vivian at 6:49 PM

you are a good friend to be willing to drop everything and take off - I do hope your own health issues will be ok, you do not go into detail so I assume they are not life threatening! So many projects and I love all Bonnie Hunter so your quilts are great!!

Oh, man -- you and your friend will both be in my thoughts and prayers. And yes, my eyes nearly popped out of my head when I saw that Ringo Stars is your "easy, mindless" sewing project! Hah! I'm glad you have your quilting to keep you sane and that you and your friend have one another for support and encouraging. It's so obnoxious when our bodies start wearing out on us when our minds still have SO MUCH to do...