Before It's Over, I Better Get Out The June Update!

As of last Wednesday, it's now official -- Happy Summer!  I had hoped to get back to post before the end of May but life and "squirrel" moments got in the way!  This is the first full week of Summer and I am happy because as of right now, all of my community commitments (with the exception of the community garden) are on hiatus until September.

Even all the spring prep work for the garden (both the community one and my terrace planters) is finally completed.  So far I'm signed up for volunteer hours on Sunday afternoons (with DH) and Wednesday mornings in July but there shouldn't be any of the hard grunt work of the last few months to do when I go.  That means I can expect to spend less time there (just our regular four hour shifts rather than a whole day) and expend far less physical energy than I have to date.  Not being exhausted on the return from the garden means I am more likely to be able to sew when I get back.

Well, I finally pushed through to a finish on the Baskets mini quilt!  You can read more about that here. 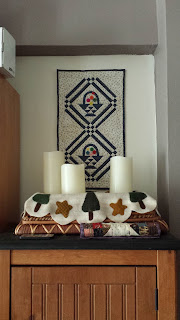 I also finally got started on "Catch" my project name for Brenda Henning's "Alaskan Silhouette Sampler" which I'll talk more about in future posts. 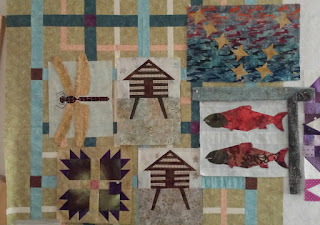 While finishing the basket mini and sewing the "Catch" blocks, I used "leader/ender" piecing and was able to finish the last two Scrappy Trips blocks I had set up as well as two more. 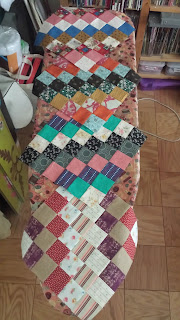 As you make stuff you generate more scraps and since I also needed more "leader/enders",  I also pulled out my "Scrappity-Do blocks"  (last seen on the blog here) and got nine more made up! 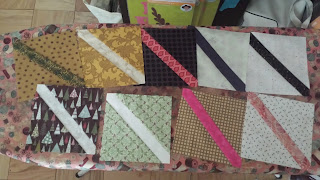 Still to do:  On the right in the picture of the "Catch" blocks you can just about see that my "En Provence" pieces are also still on the design wall.  That's because I want to lay all the blocks out before stitching them up but I'll need to remove the "Modern Twist" top (under the Catch blocks) to do that.

I have big plans for doing some Modern quilting on that one and have spent all Spring gathering ideas for that so now need to finalize them and get it quilted.   It should be noted that it was my APQ UFO pull for January!!  Needless to say that other project numbers have been drawn for all the months since and all of mine need to be quilted.  Yikes! That's six UFO projects identified but none quilted yet.  I really need to get to work!

Another thing I STILL need to do is finish the gifts for my friend and her husband. 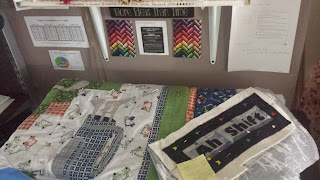 That's an old picture -- as noted in a previous post, back in May I got her mug rug quilted and bound.  The couple had traveled to Europe last month and I thought I'd give myself a deadline of finishing the projects up while my friends were away.  Unfortunately, I didn't have the date of their return before they left and cell access was spotty so we couldn't communicate.  Then I let other things intervene and they were advised by the U.S. Embassy to cut their trip short and return early.  The last leg of their tour had been scheduled to travel to Manchester shortly after the bombing that happened there.

Now that they're back, we're planning to get together to see all the pictures from their trip and I'd like to bring the gifts with me to that event.  My friend's mug rug only needs a label (and cookies baked to go with it and the mug) but I've still got to quilt and bind her husband's quilt.  With the "Blue Baskets Mini" done, that has to be the next priority.

The other "squirrely" (away from the machine) things that grabbed my attention all Spring:

The MODA Blockheads have been going on since March.  Block #17 will be posted on Wednesday.

Sharon Barnes of Australia who had previously reproduced the beautiful Chester Criswell Quilt has been posting test blocks for reproducing her Malanga antique (actually "vintage" since it's from 1937) quilt.  She hopes to publish a book on the quilt and the blocks in 2018.  I'd love to dive into my 30s stash and work on those this Summer.

I've also been following the Simple Simon Modern Quilt Along in the hopes of doing another Modern project in the future.  It's posted on the first Wednesday of the month, starting back in February and will end in November.

At The Quilt Show, they have so many things going on:
* The Halo Medallion BOM designed by the recently departed Sue Garman and running through December.
* Zoo Nouveau,  a Summer techniques sew along which started back in April.
*Designed To Quilt:  A series of lessons on the elements that make up appealing quilt designs.

Ricky Timms, the co-host of TQS, also has the free Legacy Quilt Club BOM going on at his website.

Piecing the Past Quilts (from whom I got the Blue Baskets kit) finished their Peace & Healing free BOW (Block of the Week for 33 Blocks) in May and started a new one, Rest & Refreshing, at the end of April that will end in September.  Block #10 was released today and prior blocks can be purchased from their site. They also have a free Summer Sew Along that started last week but I'm sitting that one out!

About a month ago, I discovered that Quiltmania has been doing another free BOM called Tuesday Hearts that posts on the Second Tuesday of each month.

Of course I'm also following Barbara Brackman's 2017 Civil War BOM called Yankee Diary the next post of which will be on Wednesday (they post on the last one of each month).

And last (for me) but not least, the Temecula Quilt Co. scrappy First Friday Sew Along that posts -- you guessed it -- on the first Friday of each month!  I'd like to do this one (and/or Jen Kingwell's "My Small World" quilt) straight from the scrap bins this Summer.  Got to get organized though -- not my scraps, they're all sorted -- just me!

I know there's even more out there but with all of this, no wonder I'm so distracted!  Hope you are happily stitching away as the official Summer season gets underway.   As always, I wish you Happy Quilting!!
Posted by Vivian at 2:54 PM