It's getting late, time for check-in:  So it was a busy day today -- not so much for quilting but for baking! 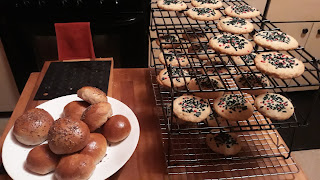 Bread was low and who wants to go out to the store on a cold day?  So a quick batch of our favorite quick and easy rolls to go with the equally quick Ham and Cheese Crustless Quiche (another favorite gotten from Judy Laquidara's Patchwork Times blog years ago) to help use up the ham made for Christmas.  Would you believe that I got the ham while in NC at the COVID testing site?!?  The testing was held at a church and was a drive through set-up. 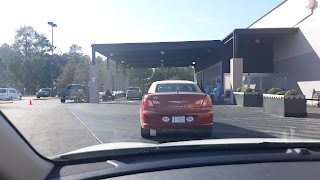 After you were tested but before you drove out, each person tested was a given a spiral ham shank and a box with other dinner supplies (potatoes, sweet potatoes and a small bundle of collard greens, corn bread, stuffing and gravy mixes, canned fruit and juice) as well as PPE supplies (a box of masks, a bottle of sanitizer, a digital thermometer, two boxes of Ibuprofen) and a flyer with a number to call if you needed someone to talk to if you were having trouble dealing with stress regarding the pandemic.  If every test site did that, everyone would get tested!

Since both my MIL and I got tested that day, we both were given the supplies.  I left the collards with her but shipped the rest back home knowing I was set for Christmas dinner!  Of course, good but simple food needs a good but simple dessert -- Sugar Cookies anyone?  It's DH's last day home before returning to work.  The post holiday package rush will probably continue this week so I don't expect to see him much until New Year's Eve so a little indulgence was in order!

As to the quilting:  I did get one of the sets of nine patches done last night before we broke to watch the last two episodes of the "Mandolorian" with our sons.  DH and I followed that with the "Call the Midwife" Christmas special and then I headed to bed.  Today between all the cooking and baking, I got the second set of fifteen made.  Since I don't have my MIL's die, I had to cut the setting triangles the old fashioned way:  strips and the Fons and Porter setting triangle ruler. 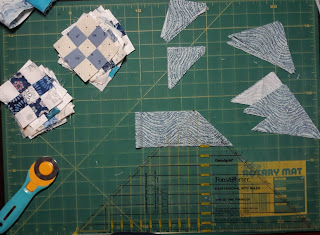 As I had when I worked on the top in NC,  I'll need to attach setting triangles to two sides of each block to make playing with the placement of the blocks easier,

We'll see how many I get done tonight but I think I'll have a better chance of getting a good portion of them and the layout settled tomorrow after the hubby heads out to work.  At least there's enough leftovers that I won't have to cook!  That's always a big boost to plans to spend the day quilting!!

That's a lot of goodies to get along with a covid test!

All your baking, and the 9-patches, look good.

Vivian,
I was just thinking about you and there you are in my blog feed. I did a little Christmas baking and enjoyed a quiet day at home with my Sweetie.
Have a fab 2021!
Teri