Woo hoo!  It took me all afternoon and this evening but the "Snow Day" top is now done! 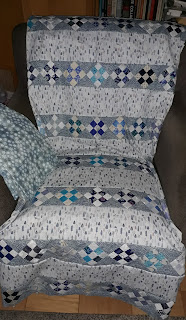 This is the chair it will go on once quilted and that's the backing on the arm.  With two rows of blocks, setting triangles and sashing to put together, I thought this would be a quick finish.  However, as always finishing takes longer than anticipated.

I had made a cutting error for some of the strips for the setting triangles.  I had to correct for that especially since I didn't have a lot of the fabric left.  Measure twice, cut once!  I was able to cut a few new strips but still had to figure out how to correct for the mis-cut ones.  Ultimately I took scraps and did a good bit of "poverty piecing" to get the total I needed.

After finally piecing the block rows and the sashing strips together, it was time to attach them to the rest of the top.  I had cut the sashing strips based on a length I had calculated when I worked on this in NC.  But when I pinned it to the new block row there was a lot of excess.  When I looked at the previously pieced rows, I realized I had (incorrectly) pieced them with too large end triangles that extended the ends of the rows past the seam allowance of the blocks.  the new rows had been pieced with the (correct) smaller triangles on the new rows which explained the difference in length.  So that meant correcting the sashing and after attaching the new rows also having to trim back the previously pieced sides of the top. 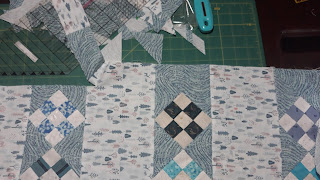 But it's done and I still have a few more days to try to get some more things done.  The good news is that the doctor's office called and moved my appointment for tomorrow to the morning.  I'm glad not to have to interrupt the sewing day to go out.  Look forward to seeing what I can get to when I come back!

Congratulations on getting that top done. It looks good!