It took a while but it's finally done!!!

This quilt just goes to show that you do not have to make each quilt in a book individually, you can combine elements of a few into one project!  "High Strung + 2" is made with a combination of motifs from quilts in the book "Tis the Season:  Quilts and Other Comforts" by Jeanne Large and Shelley Wicks.   From the book, I combined the overall design of "High Strung": 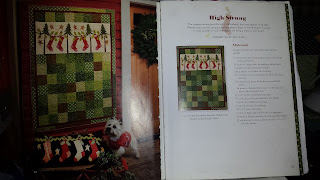 ....with the Stars and Circles from "Holiday Stars Trio": 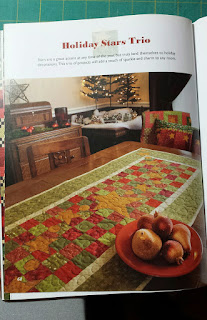 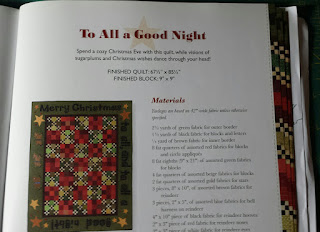 These aren't the only designs I've used from this book -- I also made their quilt "Vintage Cherries".  Mine was called "Vintage Cherries For Valentines" because the colors they used made me think of chocolate covered cherries!  That one was finished last year (pictured below) and has been hanging on the back of my couch in celebration of the holiday this month. 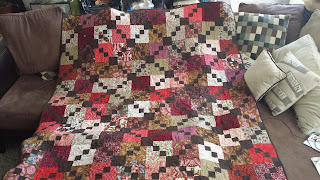 My original plan for the year was that I'd start it off hand quilting a wholecloth project.  However, when my sewing machines went out just before Christmas, I realized it was an opportunity to finish up some other projects by hand instead of by machine as originally intended.  I decided that one of them would be this holiday quilt.  I had started it in December 2014 with plans to have it ready for that Christmas but that didn't happen.  I then worked to complete the top in January of 2015 and figured that with the rest of the year to complete it, it would be ready for the holiday at the end of the year.  The machine fiasco nixed that plan and if this quilting hobby has taught me anything, it is that persistence is the key to a finish!

After learning to hand quilt in 2010, I have long wanted to try the "Big Stitch" version of it.  My decision to try it with this project was advanced when Craftsy had a year-end sale and I saw a set of Valdani threads for sale.  These were the threads as they were pictured on the site: 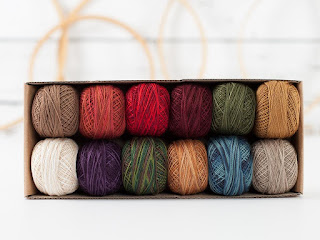 The green variegated (2nd row, third from the left) with what looked like purple or burgundy, the light gold (next to it) and the red (1st row, third from the left) all seemed perfect for using on the High Strung quilt.  So I worked on hand basting the quilt while I waited for the thread to arrive.  However when they did arrive, I was a little taken aback because what I received actually looked like this: 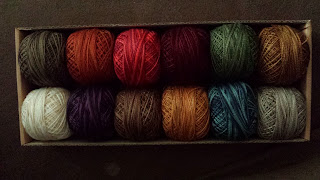 Important lesson here:  I've learned over the years that when buying fabric over the internet you have to take the color presented on screen "with a grain of salt" meaning you have to allow for the possibility that the color may vary some or even a lot from what is rendered on screen. If you want exact matches to something, you are better off shopping in person in a LQS or craft store.  Now I know that's also true for thread!  However Craftsy is not to be faulted in this case.  When I took pictures of the spools, the initial shots (both in natural light and under flash) looked like this: 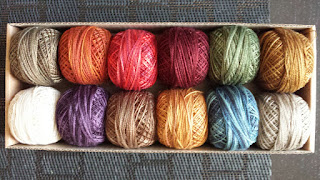 As you can see this shot is pretty close to what Craftsy showed!  The picture I used earlier which is (to my eye) closer to what the spools actually look like in person, had to be taken nestled deep in my couch to get that image.  So the issue here is that these threads really seem to react to the light around them when it comes to picture taking although I do believe that the green/purple/burgundy variegated was actually substituted with a completely different color thread.  In any event, the less variegated green, the cream/tan (what had looked white in the original Craftsy picture) and the red would still work for this quilt so I changed my expectations a bit and moved on, albeit starting on the stitching a little later than I had planned.

So, after hand basting the quilt (to stick with the "Hand Work" theme): 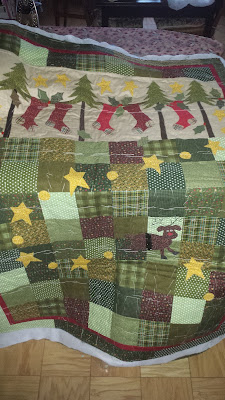 .....it took some time to "Quilt Whisper" this one.  I really wanted to follow the swirl of the "stars and circles chain" so that was my first stitch choice.  I also wanted to do a "seed stitch" style of quilting in the top section.  This is a warm-up for quilting my Heart & Home top since I had an idea to do something like it on that one too.  I ended up stitching these much bigger than I originally envisioned.  I started out making them very small but then ripped those out in favor of these bigger stitches.
﻿


I did very little marking when I started stitching the bottom section so unfortunately while I started off good, when I came around the bottom instead of following the last star and circle down, I went up.  So while I think that diminished the impact of the swirl, the overall texture of the background still looks good. 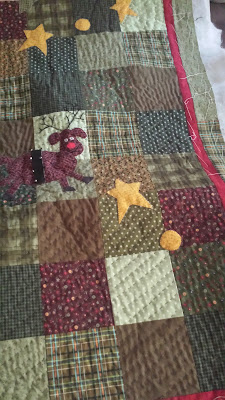 Another feature I liked for this quilt is the reindeer harness.  I managed to dig out a scrap of some faux leather I had laying around.  Initially, I had attached some silver beads to embellish it that were pretty hard to secure.  I did it by trying to sew a big French knot through the bead before basting the quilt.  Unfortunately as I worked on the quilting, the beads began popping off! 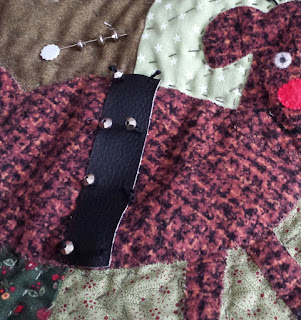 Fortunately, during the course of working on this I had signed up for and attended an introductory jewelry making course at a local Joann's store (yeah, I know, like I really need another hobby!).  To prepare for the class I had gone through some supplies of my mother's that I had.  At one point she had started making earrings and embellishing felt tams.  I truly lucked up when I found these among the things from her stash: 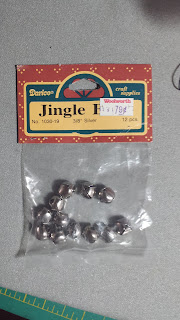 Little Jingle Bells!  Perfect!  Also good is that they had a shank on the back so were much easier to attach even with having to do that after the quilting!   Another hurray for sticking to a theme! 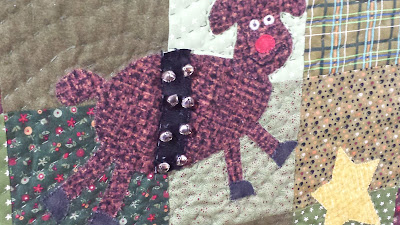 The green and burgundy fabrics, the applique background and the red border and binding fabrics were all cottons from Connecting Threads "Prim Pennies" line from two years ago with a few injections of other green fabrics from their "Candy Basics" line and the green plaid with orange is from their line called "Mix It Up!".  The applique motifs were flannel scraps and stash from the making of my "Flying For Cover" and "Triangle Trips" quilts back in 2010.  The finished wall hanging is 45" x 65-1/2".

Looks like, for once, I'll be ready with Christmas decorations before the holiday for a change!  If you'd like to see what other projects from books have been made this month, head on over to Sharon's at Vrooman's Quilts.  You might just see a project that has been sitting on your bookshelf waiting for you! 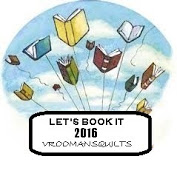 Fantastic finish!! I have bought things off craftsy and not gotten what was advertised - so no longer. Love to see hand quilting and I like the big stitch myself.

How cute!!! I love that you combined ideas on this. the reindeer and bells are so perfect.

I like the star trail on the quilt. Moves your eye around on the piece.

This is wonderful, I love that you made it your own. I agree that variegated purple and green looks like it's been switched out, which is weird. Trying to buy the perfect color on the internet seems to be impossible, I've given up. The mini bells are so perfect on that harness, lots of things came together for this quilt.

Your quilt is adorable and I do like the changes you made to the pattern.