Some Thoughts On the Word of the Year.....

As we head into the second quarter of the year, I thought I'd take some time to reflect on my Word of the Year.  For me, the word this year is PLANNING.

For a few years now, I've been trying to understand how I get my projects from beginning to end and improve how efficiently I can do that.  The goal is to minimize frustration and procrastination.  Doing so allows me to actually get that "More Projects Than I Have Lifetime" list closer to being accomplished!  I've come to learn that project overload doesn't help that process although I can't say that I don't keep doing it anyway (my RSC 2021 project list is a prime example of that)!  However, not feeling like I am being buried by the overload means having a good understanding of what can be done in a given amount of time.

I've learned that part of that is planning.  First you have to know what you want to do, then you have to truly understand what it takes to do it.  In the words of Jessica Able, it's understanding whether something is a Task or a Project.

I have been guilty in the past of thinking something is a Task (Oh, I just have to make 30 of  those blocks) but only when I start to try to tackle it, do I it realize it's actually a Project (Oh, to make 30 blocks, I have to cut 300 specific pieces and then sew sub-units, then sew sub-sections and then sew the sections together to make the blocks).  Got to say that was an eye opener!  Understanding that in advance reduces the number of curse words or minimizes the project depression (aka slogging) that happens later.

It also means that if I don't make a deadline, I know why instead of feeling like I failed.  January was a case in point.  I was thrilled with what I did get done yet it was no where near the complete list of things I had wanted to accomplish for the month.  Yet pretty much everything that I fully evaluated and mapped out did get done.  When things didn't get done in the time expected, I could usually point to where I either did not break down the tasks far enough or that I did not evaluate just how many tasks needed to be completed each day in order to meet the desired goal.  As a result, the year started out on an up note instead of a downer.

While it may sound like a lot of trouble to go to for a hobby, I admit I truly like what I get to do, what comes out of it and want to be able to do even more.  So if I'm going to make myself happy, I gotta know what it takes to be happier!  As Bonnie Hunter has shared with us: 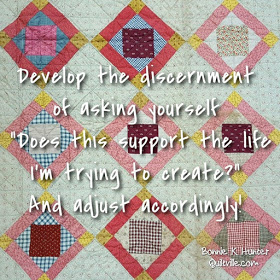 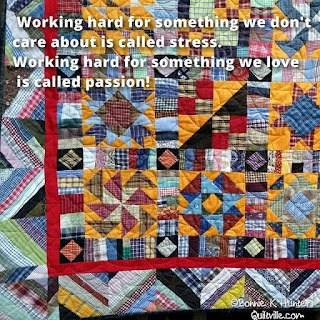 Nothing backs up a good life lesson better than a quilt!
* * * * * * * * * * * * * * * * *
In a big nod to planning, starting tomorrow, I'm going to take up Frédérique's (of the Quilting Patchwork and Applique blog)  A to Z Quilt Challenge for the month of April.  After quilting for almost twenty years (January 2022 will be my anniversary!), I realize the breadth of my complete fascination with quilting really has run the gamut from A to Z!  With the topics already mapped out, look forward to daily (except for Sundays) posts on the world of quilting from my perspective.  Should be fun!
Posted by Vivian at 12:56 PM

Labels: Musings, Word of the Year

Good luck with all your planning! And I will look forward to seeing your A to Z posts.