August Recap: What A Whirlwind!

In July I made my way back to the sewing machine and then in August, I amped it up a notch.  Well, maybe two notches, Lol!  So much tackled, a few things started and an important finish.  I'm hoping to approach September just a little less frenzied.

First off, my priority for the month had been to finish work on some zigzag machine applique while I still had Rhubye, my Singer 401 in the sewing machine cabinet.  I had hesitated working on the applique at the end of July because for some reason, I was under the impression that I had never done that on this machine before.  I wanted to check the stitch width and how stitched units that are layered underneath other units looked.  So  I did a scrappy test block first.... 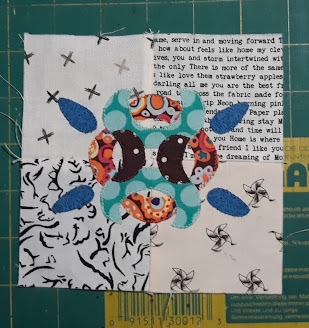 ....and when that went fine then did the center applique for "Esther's Garden Box", a Kim Diehl "What Nots Club" pattern. 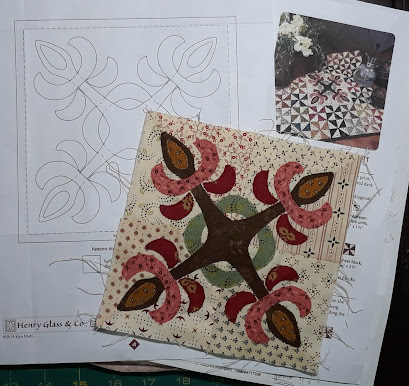 I had purchased the "What Nots" kit to provide some extra fabrics for yet another Quarantine project I have brewing.  The good news was that I was able to get what I needed and will still be able to make up the whole kit project as well.

With that successfully done, I then FINALLY stitched down the stars and word appliques for the "Hope" Quilt Along QOV top I finished back in June. 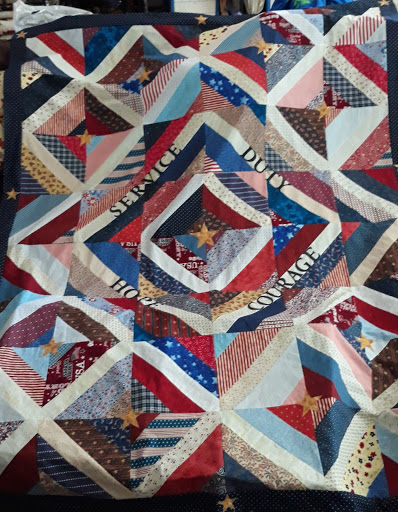 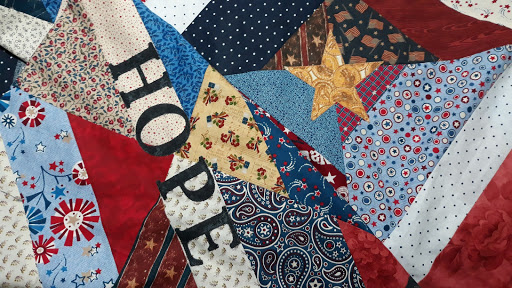 It was only after that I was reminded that I had actually done machine applique on this machine before!  Back in January of last year, I made a baby quilt for my DH's cousin and appliqued the child's name on it.  Yeesh!  My quilting memory must be shot because of this pandemic!  Or maybe it's just a side effect of project overload.

I was also hoping to get back on track with my BOM projects.  I  managed to bring the blocks for the Joann BOM up to date.  The Joann's were the easiest to do because they are pre-cut so made great leader/enders for other projects worked on this month.  They are now up to date through August. 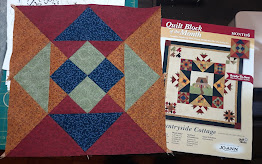 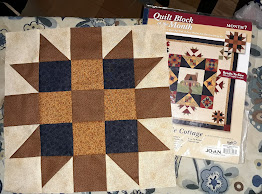 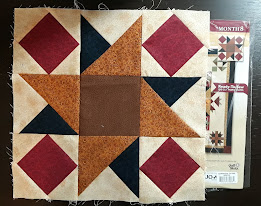 I only got two of the four AQS BOM blocks I wanted to work on done.  Cutting scraps from the AQS blocks, I also got a few more Spider web units for the tree skirt made up too. 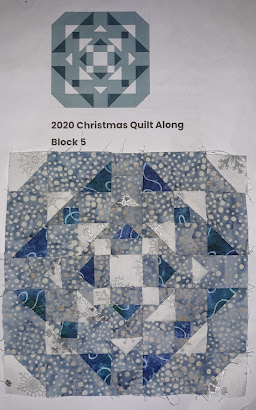 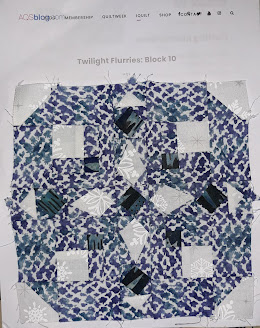 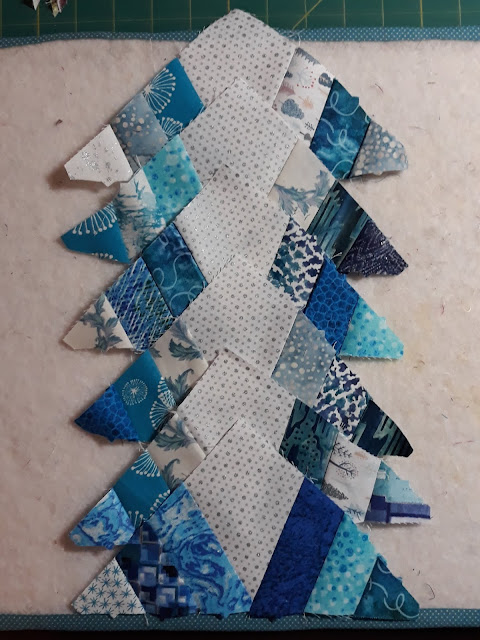 In order to catch up on the AQS blocks, I need to make four blocks each for August - November to bring me back up to date.  I'm going to try to get the other two August blocks done by the end of this week and then attempt to stay on track for the rest of September.

Having done Edyta Sitar's Mystery 2020 QAL back in May, I am now officially in a Laundry Basket Quilts obsessive phase!  I am loving everything LB I see to the point that I have not one, not two but three projects planned using the scraps from all the blue fabrics I  purchased for the AQS project!  It would have only been two except that I saw another of her quilts that is in her book "Handful of Scraps" and wanted to add it to the Bucket List.  Just my luck,  I found someone selling a copy of that book on eBay along with Edyta's "Patches of Blue" book at a "couldn't pass it up" price.  I shouldn't have been surprised when the books arrived, to fall in love with some of the Blue and White projects in the second book.  A real problem when it's the color theme for this year's Christmas decorating and the AQS project.  So the third project got added from that book.

But it didn't stop there!  The plan is to work on all the blue and white projects through the Fall and finish up before the holidays.  But the LBQ obsession could not be quenched and called for more immediate fulfillment.  What to make?  How about something small?  Well, I've also been dying to make a log cabin quilt.  That fire was stoked after using my Log Cabin die to cut the strips for the borders of Edyta's mystery quilt.  Then one day I came across her video for her little "Lidia" quilt.  Perfect! 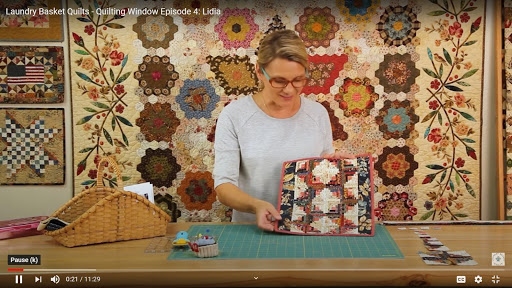 Even better,  I've been establishing a new mini quilt display space so making this would help fill it.  However, the pieces for it were so small I didn't need to use my stash of log cabin strips,  I could pull and cut what I needed from my overflowing "Crumbs" bins.  Another bonus! 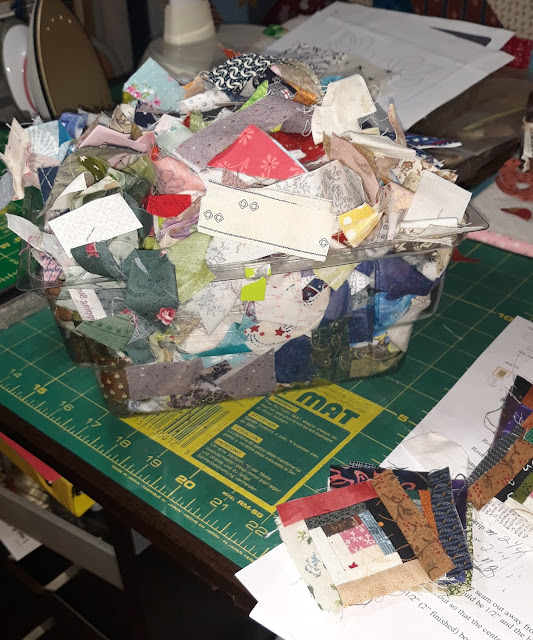 After joyously rooting around in the "Crumbs" for "Lidia", what should I see on the web but a Carrie Nelson "Schnibbles" pattern named "Gertie".  Who can resist a Schnibble?  It's  designed to use Charm packs (5" squares) for a lap quilt but I realized if I downsized it and used even more "Crumb" bits to make it, I'd get another little mini for the display space.  So this happened: 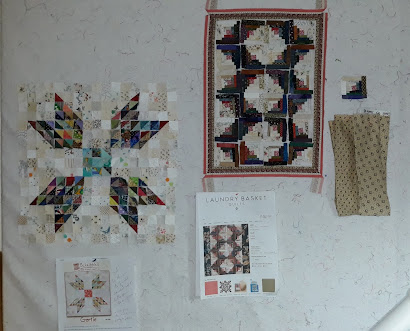 The blocks for Lidia are pieced and the border print is picked out.  My border will be smaller than Edyta's in order for it to fit the space where I want to display it.  All the HST Gertie bits are pieced and background squares cut so now I just have to sew it all together.

It was at this point that  I could FINALLY swap out the 401 for a long deserved rest and swap in "Nova" the Brother 1500 mid-arm.  I thought it was going to be for trying to FINALLY  quilt one of my own projects but nope!  The pandemic curve has flattened greatly here in NY and things are opening up more and more.  So it shouldn't have been a surprise to get a call from the troop leader of the Girl Scout troop we had worked with back in December and January.  They were setting up a meeting and she wanted the quilt made from the finished blocks.  Yikes!  I had gotten the top, backing and label prepared back in March right  before we went into quarantine.  As a result, I held off doing the quilting -- or more honestly, switched my focus to mask making and all the quarantine quilt alongs and personal project inspiration that came in.

However, I was more than happy to have a motivation to move something to a finish and out of my quilt space.  So I decided on the final binding choice (picked from an assortment of fabrics that had been purchased for the EPP workshop I did in February) and got to work on that. 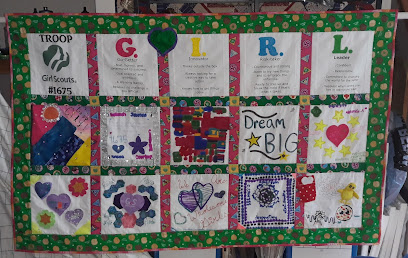 I quilted it much simpler than I originally planned.  I limited it to stitching in the ditch around the blocks and the only free-motion done was around the hearts in the fussy-cut sashing squares.  There was a lot of hand work to be done though:  Although I attached the binding completely by machine (sewn to the front and stitched in the ditch to tack it down in the back), I needed to hand stitch two 3-D applique motifs that were applied on top of the sashing and also tack down some of the motifs and trims that had been attached to the blocks so that they stay secured as the quilt is handled.  I also sewed on a hanging sleeve on the back since part of the original plans for the quilt was to make it so the troop could carry it as a banner in a parade.

So the good news is that the straight stitch only machine now in the cabinet means I can quilt big quilts but still be able to piece things.  I'm hoping there can be a few more quilted finishes for September even as I continue to work on catching up on the BOMs and piecing some more quarantine projects.  Add to all of that two national political conventions and a couple of hurricanes and it really was a whirlwind of a month!

Vivian - did you sleep last month?

Seriously, you are doing some beautiful work/play and the blue ones are amazing!

Ha -- just read M L's comment before mine. I'm reading your post, blown away by all of the amazing creative things you've been up to, and it just goes on and on and on... So many beautiful projects! The applique, the Laundry Baskets (love their patterns but have never attempted one). You go, girl!

Wow, you have been productive! I love the idea of a mini quilt display. It looks like you have two gorgeous pieces underway for that.