Squeezing in one last finish for February.....

The binding is on for a fun "Scrappy Trips"! 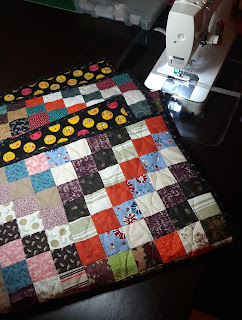 This is a UFO that has been waiting for its turn under the needle since the end of 2018! 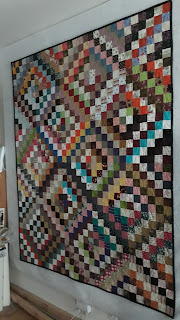 It is another quilt design by one of my favorite designers, Bonnie Hunter.  Her free "Scrappy Trips" pattern was all the rage a few years back and I love the opportunity to make a good "kitchen sink" 'scrap quilt.

Having employed Bonnie's Scrap Users System for awhile (although also incorporating standard scrap sizes from other scrap quilt designers like Joan Ford and Judy Gauthier as well),  I definitely needed a project that would draw down the 2-1/2" strips bin a bit.

This is also another quilt where I am using a flannel back -- isn't this fabric fun?!? 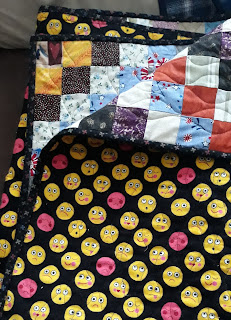 Much like with the last quilt,  I wanted a texture that would create a cozy feel.  I had long debated just how to stitch this one up.  Visually "Trips" quilts create these vibrating "pools of color" and I had hoped to emphasize that with the quilting.  However, I've seen many "Trips" quilts simply grid or all-over quilted and that visual effect still comes through.  So since I am still working on re-acquainting myself with Free-motion work, in the end it was about finding something simple I could execute but still bring some texture to it over all.

I found that in my "Stitch Ideas" binder where I had filed a motif I had seen on Lori Kennedy's blog a while back. 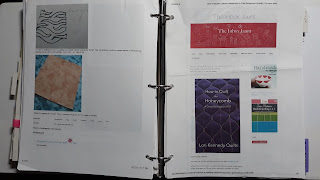 Lori Kennedy teaches free-motion quilting on domestic and now long-arm machines.  She calls this one "Honeycomb".  It reminded me of the texture of mattresses!  Worked for me!

And while her tutorial instructed how to do the motif by marking a solid fabric quilt sandwich, I realized that the motif was also a good candidate for what Angela Walters calls "Dot To Dot" quilting:  using the pieced intersections or design points of the blocks in your top as guide points on where to aim your stitching.  I started off doing a rounded motif like Lori's by going square to square.  However, I quickly realized that would take just a little longer than I wanted it to!  So I elongated my stitch pattern over two squares.  Sometimes I hit my marks well and sometimes not!  Over all though, with such a busy top, it manages to work. 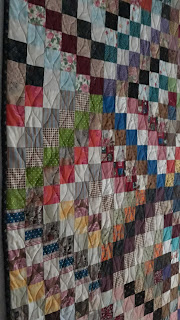 Side Note:  To see how other quilt designers use the "Dot To Dot" technique with even more advanced quilting motifs, check out this interesting Craftsy article.   Lori also shows how you can do even more with the basic Honeycomb motif here.

Since I am still in the honeymoon phase when it comes to quilting on "Nova" my mid-arm, I need to stick with the basics until I get my sea legs working with her.  It took me a bit to work on getting the speed of my hands coordinated with the speed of the machine so I didn't create "eyelashes" with the stitching and to reduce/eliminate "pokies" since I used a different color thread on top than in the bobbin.  Eventually the tension issues settled down although I may have to rip the first two columns I did and re-do them.

More importantly, I am glad to have another "back of the couch" quilt with a comfy flannel back handy.  Spring is around the corner but there will still be some nippy days ahead!

Cynthia for Oh! Scrap at Quilting is More Fun than Housework (that it is!!)

Andree and Muv and the Free-Motion Mavericks at Quilting and Leaning, What A Combo!

Lovely! I, too, am hoping to make progress on my Scrappy Trips quilt this month.

Well done, that is a cosy looking quilt. The backing is fun, and the quilting looks good.

Congrats on a wonderfully, scrappilicious finish Vivian! It's fantastic!

Wow - that quilt is a winner! Can you explain how you hang it on the wall, while you are working on the blocks? Thank you!

Hi Vivian, I really like how your quilt came out. It looks great and has a very happy backing! Thanks for sharing all of those links. I've done quite a few of Lori Kennedy's motifs but I don't think that I've seen this one. It would be perfect as a dot-to-dot. Congrats on a finish and a UFO completed. Thanks so much for linking up to Free Motion Mavericks. Take care.