As usual, it took a bit longer than planned but I was able to finish up the little iron tote this morning. 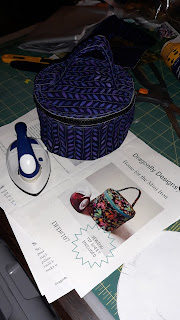 After starting it on NewYear's Day,  I was working at a good clip yesterday and really thought I'd have gotten it done.  However, it's patterned to have a pocket installed on the inside and for the life of me, I couldn't get it in!  It frustrated me enough to call it a night on the tote.  So I ended the day by attaching the new length of grid yardage I had ordered to the original one I had.  Now we'll have a more than big enough design wall for our return to the Girl Scout workshop tonight. 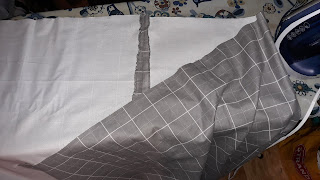 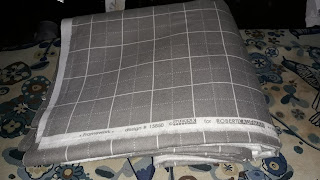 Stopping was also good because it gave me the opportunity to employ that tried and true problem solving technique --- sleep!   I went to bed and when I awoke this morning I had my solution.  Since I had planned to use the pocket to store the cord for little iron, I figured out another --- easier to sew --- way to protect it in the bag if the iron is still a little hot when it goes into the bag.  Instead of installing the piece I had prepared for the pocket as per the pattern: 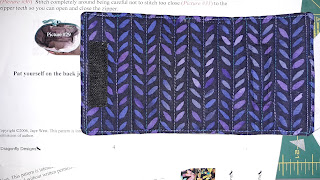 I added Velcro to the middle of it and turned it into a wrap which solved all of my problems! 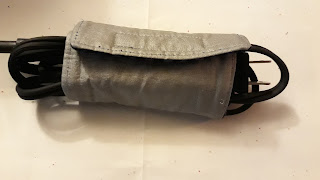 That done I was able to add the top (which also took a little doing) and then this little project was done! 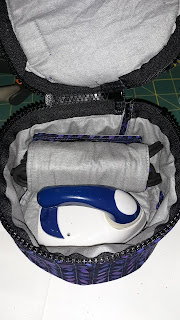 So next time this little iron needs to travel, it will do so in style!   I have another iron tote pattern that turns that tote into an iron mat.  I want to make that one for my Steamfast iron.  Maybe that will be finish #2 for 2020!
Posted by Vivian at 9:54 AM

That's really cute! I haven't seen that pattern before. I do have one that turns into an ironing mat which sounds like it could be the same as your other one, but as I don't have a little iron I've never made it.