When I started out as a quilter, I was surprised to find out that Plaid fabrics were considered good for a design element in quilts.  Coming from a clothing sewing background, plaids were limited to use in cowboy-style shirts and wools for pants, skirts and scarfs!  So I was fortunate to get a set of large plaid cotton swatches in a bag of garment center discards that I asked my husband to pick up for me when he made deliveries in the garment district in our city.  Those swatches eventually became this cozy quilt which is beloved by our family:

From that point on, Plaids became a sought out fabric when shopping for projects!  And while plaids do appear as one of many fabrics in some of my projects, I haven't yet done another project where plaids are the feature fabric.

However that is not to say that isn't planned!  As we know, old clothing has always been part of the quilter's fabric arsenal.  Bonnie Hunter's first two books definitely influenced a lot of plaid shirt collecting on the part of quilters, me included. 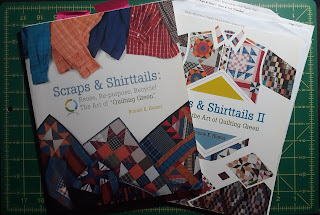 The Goodwill stores in my area don't allow me to score them as cheaply or in as great a quantity as I've read other quilters are able to do, so my stashing of those fabrics has been spotty and slow at best.  But the pile is developing! 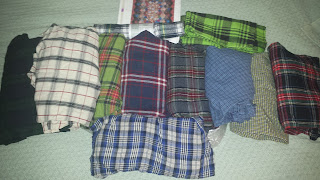 This is a stack of shirts I "deboned" using Bonnie's method back in 2015 and I purchased a few more in 2018 when some of my fellow community garden members told me about a Goodwill store I had not known about.  So one of these days, I expect a plaid Quiltville gem to be created!

Do you like working with plaid fabrics?  Do you buy it as yardage or source it from clothing?

I like Bonnie's method to "debone" a shirt! Thanks for the link.
How fun, same ideas, my saturday's post was about old shirts ;)
Quilting Patchwork & Appliqué

Your "Flannel point of no return" quilt is gorgeous. I went back and read your post about how it all came together, which was fun.

I don’t do much with plaid. And my stash is so big, I don’t need go go the used clothing route.