Have you ever participated in a Block Swap?  Back in 2009, I followed the blog of Margaret Solomon Gunn (then the "Quick Queen of Quincy") and she announced that she was planning to host a summer block swap.

A “Block Swap” is when a group of quilters make up a set of the same blocks in colorations and fabrics of their choice or within specific guidelines set by the swap host.  They trade in their finished blocks to the host who then sends them blocks made by the other swappers.  This is one of those “quilty” things that I wanted to try at the time. 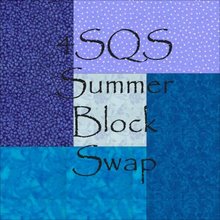 When Margaret posted the swap instructions and block tutorial for the “Four Seasons Summer Block Swap”,  I was encouraged by how simple the block and fabric requirements were.  I emailed her to see if I could secure a spot in the swap and managed to snag the last one!  Thankfully, this swap was just for the blocks and did not require participants to complete a quilt or top with the blocks they received by a deadline since that was something I was not sure I could do.   I mailed off two sets of twenty blocks by the submission deadline and received forty in return to make my quilt.

I debated for a long while on how to combine them together into a top.  Then I saw this quilt in the Summer 1999 back issue of QUILT magazine....

....and that inspired me to make this top in 2010 which I call "Bouncing Color Blocks". 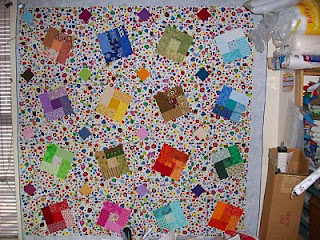 When thinking about a topic for today's letter, I was reminded of that top which up to now STILL had not been quilted!  The last time I had worked on it was back in 2012 when I layered it and did some stabilizing ditch stitching on it.  My plan for the rest of the quilting called for wanting to quilt all the blocks in their respective colors.  However, at the time that seemed a very daunting task --- all those bobbins to wind!  So since then this has sat all this time in favor of "easier" projects.

The good thing is that time and experience reduces the size of a challenge!  So I pulled it out again..... 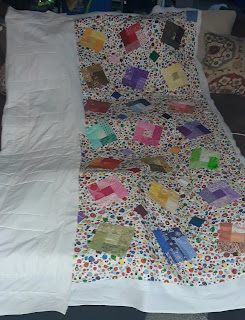 ....and have gotten right to work quilting it! 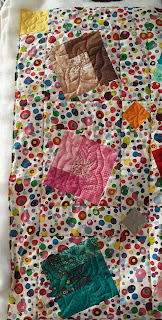 At this point I have almost all the colors quilted.  Then I'll quilt the sashings and make up the binding which will be pieced from all the solids I used for the sashing squares (thankfully, I kept them with the project).  Thanks to the "A to Z Challenge", this really old UFO will finally get finished!

Oh and our swap host?  Margaret is now a quilt book author and award winning longarmer who quilts for clients and for competition and blogs at Quilts Of Love.  In 2015, one of her quilts won a Masterpiece Award from the National Quilters Association!

Have you ever participated in a Block Swap?  Were you able to make them right up into a quilt?  If not, pull them out and see if they inspire you anew!

Labels: A to Z Challenge

Yeah, congratulations on the beautiful finish! The background fabric is very cute, and the dancing squares are pretty too.
I have made collective quilts, blocks made by several quilters, but never participated in a block swap. Not yet ;)

Well done, working on that very old UFO (now you will need to find something else for the letter "U"!)